Social Media Roundup: A presidential candidate and an attempted coallition 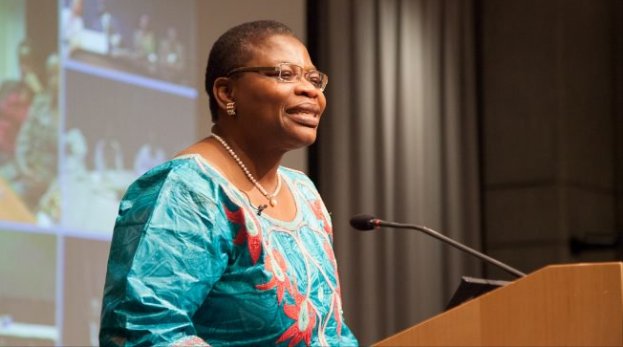 Yesterday, Oby Ezekwesili NIgerian presidential candidate under the Allied Congress Party of Nigeria (ACPN) announced that she was stepping down to build a coalition with other candidates.

The coalition will be formed for a fair chance against President Mohammadu Buhari of the All Progressives Congress (APC) and Atiku Abubakar of the People’s Democratic Party (PDP) in the upcoming general elections scheduled for February.

#BREAKINGNEWS: ANN's Fela Durotoye, after the surprise exit of Dr Oby Ezekwesili from the presidential race, suggests he may step down for AAC’s Omoyele Sowore or YPP’s Kingsley Moghalu.https://t.co/TbbEAFcAYA#Breaking #TGNElectionWatch #NigeriaDecides2019 #Nigeria

I love Oby Ezekwesili. As an economist I have always admired her brilliance and as a patriot, her activism. But how in God's name did she end up with these ACPN people? That's a terrible error in judgement on her part and I am terribly disappointed.

Good decision for Madam Oby to step down. Now after the elections ma, sit Moghalu, Fela and any other third force candidate and start planning for 2023 immediately. We need to kick this weird APC devils out of existence. PDP will need a serious opposition to sit up.

After donations here and there, Madam Oby Ezekwesili even went for #2019Debate #Presidentialdebate2019, only for her to withdraw from presidential race today. If you look at this situation very well, you can see political Yahoo Yahoo there .

So Madam Oby is graduating from one self deceit and pipe dream to another, what is forming a coalition that’ll defeat the APC and PDP in next month’s election?

And look at Oby Ezekwesili and ACPN today. She announces she's stepping down and her party immediately endorses Buhari. I mean, is this normal behaviour?

Oby Ezekwesili stepping down this close to the February election just goes on to prove that the Nigerian politics is a joke.

And if you choose to die for the sake of any politician, you’re the biggest fool around

A lot has been said about the backlash Oby Ezekwesili, Fela Durotoye & Kingsley Moghalu have received since yday. A line of thinking that has struck me is how Nigerians often demands for professionals to run for office but arent supportive & are, at times, vitriolic when they run

It's those 80million people that Madam Oby promised to lift out of poverty I'm feeling for right now.

Madam oby: I want to step down from the race for the presidential election.

Madam Oby stepped down, INEC has stepped her back up….. Her campaign will now be turninoniown…

Read other reactions here. And below for other trending topics on social media this week.

This week a Twitter user took to the platform to announce his upcoming nuptials scheduled for this Saturday.

Twitter, your boy is getting married on Saturday #tide2019 💛 pic.twitter.com/EpZ0E8NDhe

Wedding announcents typically accompany congratulatory messages and that was exactly what happpened in this case. Until a Twitter user accused him of stringing her along while planning to marry someone else.

Read more of her tweets here.

Another Twitter user joined in on behalf of her friend, some other lady Ayo allegedly lied to.

When pastor says don't make noise when u want to get married,na bcos of people wey don dey look for your downfall #tide2019

It is one thing for a guy to Love a woman ….

And it is Another thing for a guy to Smash a woman ….

He Smashed you… He Loves the wife to be …
Let all get this right…. and stop been foolish .#tide2019

So much bitterness and hatred because you cant fathom that your ex has moved on.

Not every relationship will end up in marriage.

Ordinary 4 months and she's disturbing us online ☹️ Hanty go and sit down, so somebody cannot just do and go in peace?? #tide2019

This/ He deserves to be dragged

Not judging or anything. But if you know your ways are not pure. Then don’t put your wedding invite or prewedding photos on SM. #tide2019

Men are heartless! Wat abt 1 b*stard dat I tot we had sometin real in few mnths i got pregnant *A mistake tho* wasn't ready for dat yet only for him to convince me to take them out. Yes! Them! Nd i discovered he married. I should drag him nd ruin his marriage #tide2019

Dear Ex,
I'm sorry for everything I did. If you still have my issue in mind i beg please DM let's settle privately.
Don't do me #tide2019 in the future
Your's faithfully
Ex.

Igbo men don't cheat, the only thing we do is mispronounce L and R

#tide2019 will trend today.
Everybody will drag.
.
.
Next week someone will commit suicide and Twitter will turn to
"Ah Suicide isnt the answer"
"Mental health is important"
.
Y'all crazy.
If guys are chopping you and don't think you are upgradable to wife level, turn Rev.Sis🙄

“O jewa ke eng?” has become the most the most popular question on the African Twitterverse. It is South African and means “what’s bothering you?”

It all started when a South African users tweeted the question earlier this month;

Ever since, people have been sharing the saddest, darkest, most devastating stories.

I could've saved my friend from committing suicide but I didn't 😭, I failed him. Now I will never see him ever again 💔 https://t.co/gXYKfphNoj

Had an accident with my uncle, went thru a 6 hr surgery,
A month later I learnt my uncle died in that accident.
Lost my nephew a week after birth last year.
Lost my sister on Sunday who had a 2 weeks old baby.
Every1 looks up to me for comfort,
I jus have to fake a smile. https://t.co/A1lsKOfuhN

A friend with HIV died 1 month after receiving "Holy water" from a pastor in Lagos,she was told to drink it and stay away from the hospital with faith.Her little baby is 2yrs https://t.co/qwSiHWD3S7

For almost 2 years after i lost my dad, i kept texting his number and giving him update on things he was missing. Even as little as "my exams are next week"

The message was delivering, i don't know if the person on the other end figured and let me have my moments https://t.co/9jxpD3vOUT

Others, not so much, especially when it became popular on Nigerian Twitter

The fact that people assume every kwara state indigene is from Ilorin is very annoying 🙄 https://t.co/oTGHglwoCF

Me: "The earth is round"

I'm in a one way relationship, of which all four of them text me, but I never text back, i want to breakup with all 4 of them but I'll forfeit my benefits, they are Glo, Airtel, 9mobile and… Dominos https://t.co/H9Xh64bqTw

We saw other variations too

What's the point of fixing your hair with lots of money if you'll end up covering it.
I don't care if tradition or religion demands that Hausa girls should cover their hair. They smell, they stink and so many of them are in Abuja. Give it air please. https://t.co/PZH2GKedFN

Kiddominant lied when he sang "Doing 240 on Lekki-Epe," in Fela in Versace.

I tried it. Too many traffic lights and roundabouts failed to allow me to be great.

When next he's around, he'll prove it to me. https://t.co/D5WmVmkEIh

Told my mum the movie she picked on netflix was trash and that the main actor was just fine for nothing. her reply was "so you know what fine is, why are your boyfriends always ugly then"😭 https://t.co/spo7WgEnPy

People are going through a whole lot

Men… these "O jewa ke eng" tweets are scary. People are passing through a lot.

Huge lesson: That person that's cutting everyone off, acting tough, avoiding company and not picking calls may be going through hell.

I dunno what ‘O jewa ke eng?’ means but Everytime I see it the maddest story comes with it

As you take the “O jewa ke eng?” challenge, please be careful.

Especially if you are quite fragile as a person.

It’s good to get things off your chest.
But remember this forum is filled with some sadists and psychopaths who can use what you share today to insult you tomorrow.

The fact that you didn’t use “o jewa ke eng” like others. https://t.co/3qz36pyLjw

Policeman: who sent you to kil the man?

Criminal : Oga leave me. I no talk anything