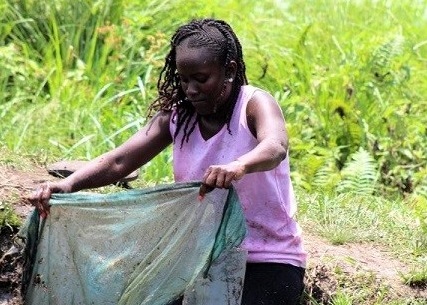 Growing up in Northern Sierra Leone, Aminata Fatmata Kandeh worked as a research assistant in an international, non-profit research organisation that harnesses the potential of fisheries and aquaculture to reduce hunger and poverty.

Luck would smile on her when, in 2016, she had the opportunity to leave the desk for a field trip to a remote community, outside the capital. But what appeared to be an exciting journey became a sad tale on arrival.

Noticing to her dismay, a scourge caused by malnutrition, especially amongst children within that community. “I could see their rib bones,” she recalls.

It is from there that she decided to make protein food accessible and affordable to rural communities and went with fish, which she considers as the best source.

A year after, she founded a small company called Agro Fish Farm.

In the developing world, more than one billion poor people obtain most of their animal protein from fish and 250 million depend on fishing and aquaculture for their livelihood — Sierra Leone no less. Seafood products happen to be an important element of survival (employment, consumption, and GDP wise).

But in spite of this, the country remains one of the poorest and most nutritionally insecure places in the world, with more than 30% stunting rate among children according to a 2018 survey by action contre la faim.

Aminata attributes this to a few factors; the devastating impact of the Ebola Virus Disease, the long years of rebel war and most importantly, the general lack of standardisation among fish sellers in her home country.

“It’s only individuals like us and other International NGOs who are making effort to revive it,” Aminata remarks.

But how so, one might rightly ask. For Aminata’s Agro Fish Farm, the play is at addressing the issue of malnutrition by providing digitally bred table-sized fishes and fingerlings as commercially viable alternatives to regular fishes in the country.

“We invested in a technology that not only automates feeding but also enables monitoring of the fishes over a mobile phone,” Aminata clarifies.

The business started out in the pilot phase, for 6 months. Its expectant new fishes, presently on the second cycle, will hit the market three months from now.

Although a 6 month-cycle of grooming fishes creates some growing concerns, Aminata believes it is not waterloo for her business. For instance, anyone in her country looking to standardise fish farming would encounter challenges of inadequate feeds as well as a shortage of equipment. Yet, even with as little as $1000 pilot phase investment, she turned in net sales of $500.

In three years, Agro Fish Farm will be gunning for a larger share of Sierra Leone’s fish industry and making a lot of revenue. About that, Aminata says she isn’t motivated by money like her competitors.

“We are not in the space just to make money. We want to solve the problem of malnutrition at hand. As a young person myself I believe it is my responsibility to contribute towards the development of our nation.”

During Techpoint Build 2019, on the Pitch Storm stage, Aminata will be competing against 11 other startups for $10,000 in equity-free prize money.