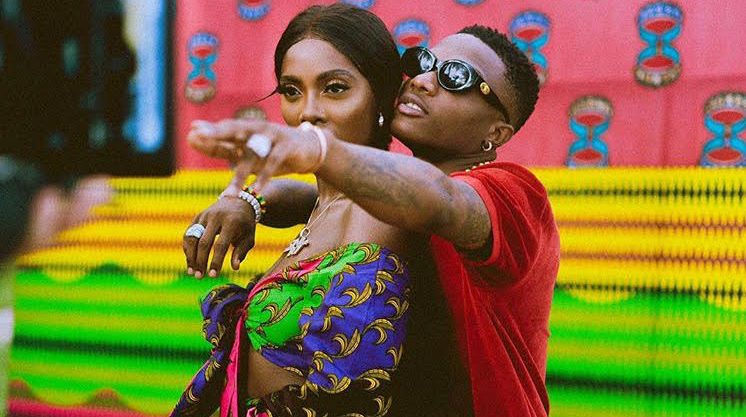 This week, Nigerian ace musician Wizkid released the video of Fever, one of his most recent songs. In the sensual video, which has caused quite a controversy on social media, Wizkid and his “bestie”and Mavin Queen Tiwa Savage fueled the speculations of them being an item. Wizkid and Tiwa Savage were trending worldwide on Twitter. Watch it below.

Wizkid and Tiwa Savage in that video…Incredible scenes.

If you think Wizkid and Tiwa Savage are not in a relationship after this fever video, all the best for you. pic.twitter.com/kPnLCWHYUT

I'm sorry I argued that Wizkid can't bang Tiwa Savage all these while.

But after watching this video, I am absolutely convinced that when you get the money and the power, you get any calibre of woman you want.

Lol pls when did Tiwa Savage become a video vixen?😂 or is this one assurance wizkid edition lmao

Shola was shouting Wizkid months ago not knowing my home boy was already planning something big with Tiwa Savage. The stew everybody was waiting for has been served. And now this fever video will be the talk of 2019. Wizkid na baddest nigga ever 😂😂

So y’all kiss your best friends on the lips like Wizkid & Tiwa Savage ? 💀

I need a female bestie like Tiwa Savage and Wizkid😩
Retweet and like, my future wife maybe on your TL😁😁 pic.twitter.com/0NIIkyCcNv

This Wizkid n Tiwa Savage drama has got me thinking

I need a bestie!😭😭😭😭 pic.twitter.com/NRYg8Y2aRF

Teebillz got the fever

Teebillz: Wizkid is my Aburo

Tiwa Savage : Wizkid is My Bro..

When Teebillz wakes up in 4 hours time and sees himself, Tiwa Savage & Wizkid trending 😊 versus when he finally sees and watched the reason why 💔💔💔

One video an BOOM!!

All in top 10.
Y'all should fear this STEW MAKER pic.twitter.com/oGtn4ChPF8

Lol… wizkid fever will hit an extra 1million in less than 20hrs from the first 1million. It must be a hard time for una haters wizkid and tiwa savage. Mad ass buzz! Everywhere is truly STEW.

Fever by Wizkid hit one million YouTube views 24 hours after its release. Tiwa Savage being all cozy with Wizkid in that video was a marketing masterstroke.

What does stew even mean?

No matter how much you try to avoid watching the Wizkid's #Fever video with Tiwa Savage, your Twitter/Instagram follower or your WhatsApp/Facebook must make you taste the stew.

Wizkid and tiwa savage now seeing how Nigerians carry this fever matter for head and know the plan worked like magic pic.twitter.com/JQdLrD8BEj

Tiwas has a message for haters

Ethiopia gets its first female president

On Wednesday this week, Mulatu Teshome Ethiopia’s president of five years filed a resignation request to the Ethiopian Parliament. His request came about a week after the cabinet resuffled by the Ethiopian Prime Minister Abiy Ahmed which saw half of the country’s ministerial seats occupied by women.

Madame le President #SahleWorkZewde! And now 1 country has a female President- #Ethiopia. Congratulations to 1 of the longest serving Ethiopian diplomats who silently broke many records in her domestic & int’l career. Hard work pays. Thank you PM #Abiy for the recognition. #AWLN pic.twitter.com/eYSfeOmONr

I am proud to hear that a former UN official, Sahle-Work Zewde, has become the first female President of Ethiopia. Congratulations, Madam President! Women do make a difference. We are proud of you! #genderequality #UN4ALL pic.twitter.com/qlmkAIJJgi

It is your moment! We celebrate you SAHLE-WORK ZEWDE! Ethiopia has said "yes" to it's first female President! #SahleWorkZewde pic.twitter.com/hCN3JJmYDY

God of Ethiopia, please Visit us in Nigeria.

Ethiopia has a woman President, woman Defense Minister and half of its cabinet are made up of women Ministers.

The apolitical office of the President can be source of stability, continuity & trust as we brace for a bumpy transition to a democratic, just & freer #Ethiopia. Our new President Amb SahleWork has what it takes to oversee this project, & to usher the state to the Third Republic. pic.twitter.com/Q63L7deDY4

What a delightsome news from Ethiopia! I wish my dear sister and friend, @SahleWorkZewde a great tenure as President of one of Africa’s countries with rich history. I know her diligence much.🚀 Amazing progress on the gender inclusion agenda lately. We rejoice with Ethiopians💃🏾 https://t.co/vlQfhQyMhd

For all the little Ethiopian girls with dreams; you too can become ministers, presidents, CEO’s, ambassadors, Prime Minsters…etc.

That is the symbolic power of this appointment

On Wednesday this week, the lifeless body of South African hip-hop star Jabulani Tsambo, popular known as HHP, was found in his home. According to reports, the 38-year old rapper had been battling with depression for a while now. Even though the cause of HHP has not been confirmed, many people believe that he took his own life.

Here’s how South African reacted to the sad news on social media.

No wonder the weather has been so off. Summer knows it will never be without Jabba. Love and light to his family and those who knew him and loved him 💔 #RIPHHP

We don't live forever like every other thing in this world we come and go #RIPHHP pic.twitter.com/KOQdwmgS1q

Tribute to the legend

Rest In Peace to HHP, one of Africa's greatest rappers 💔 pic.twitter.com/95lSSEXKza

"Memories are beautiful we should cherish them" Jabba & @CassperNyovest freestyling on the street 🔥🔥🙌 #RIPHHP pic.twitter.com/nNhL7TLRGP

HHP’s death triggered so many people yesterday. I had to help someone last night, suicide lines were busy and people were admitted to hospitals 💔

We just carry on like it's all a coincidence?#RIPHHP

It’s never too LATE to get help Depression and Suicide is a REAL THING!

We can't always blame people around someone when someone take their own life because they might look OK while fighting demons it's up to them to open up,some shut everyone out #RIPHHP #RIPJABBA

Where is President Buhari’s WAEC result?

According to a report by Punch, President Buhari has failed to yet again submit his West African Examinations Council (WAEC) result and other necessary documents to the Independent National Electoral Commission (INEC) in lieu of the 2019 elections.

According to the report, in the affidavit sworn by the president, he claims that all his qualification document are “currently with the Secretary of the Military Board” as of the time of the affidavit.

He’s been President for more than 3 years and he still can’t find his WAEC Certificate? During the last elections it was assumpeed the then Govt was frustrating efforts to allow him get one – but the President telling INEC that his doc is with the Military is very annoying to me.

Do not let BMC, Buharists intellectuals and spin doctors deflect and change the narrative to Atiku’s personal income tax of N10m.

Dullardinho doesn't have WAEC result. This man is a con artist.🤣🤣🤣

This is what Buhari is telling you people:

“I don’t have my WAEC result, come and beat me”