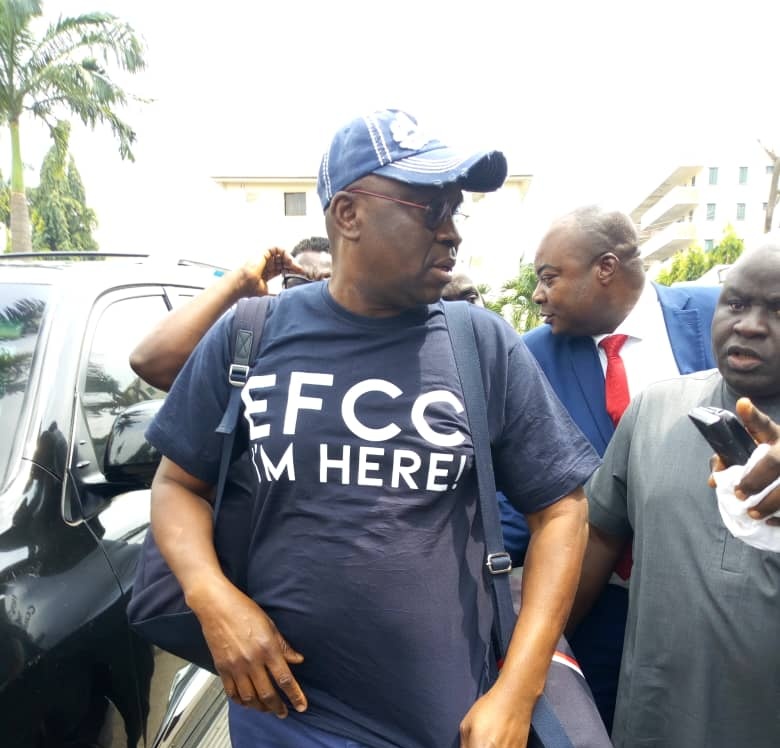 On Tuesday, while his successor, Kayode Fayemi was being sworn in as the new Ekiti state governor, Ayo Fayose was on his way to the headquarters of the Economic and Financial Crime Commission (EFCC).

While serving as the governor, he was accused of a ₦1.3 billion fraud by the anti-graft agency. Fayose promised to surrender himself as soon as his tenure ended. He did deliver on his promise, in grand style. Peep his t-shirt.

I'm now in the custody of EFCC. While I'm here, my media aide, @OlayinkaLere will operate this twitter handle. pic.twitter.com/PDkR2Q5BJF

Just as his rival Fayemi is sworn in today as the new Governor of Ekiti state, ex Governor Fayose arrives at EFCC wearing interesting Tshirt with the phase 'EFFC I'm here' boldly written on it.
Trust him to make a dramatic arrival 😩😂 pic.twitter.com/eMthUSdSod

It is not the EFCC that arrested Fayose, it is the PDP themselves through Wike and FFK that bundled him into the car, put EFCC prison uniform on him, handed him over to the EFCC and went back home. Tekbir!

NEWS: Fayose is refusing to cooperate despite the OVERWHELMING EVIDENCE we have ~EFCC

People that have overwhelming evidence don’t keep suspects in custody over night. They charge them to Court. Childish Media trial. Babachir Lawal did not sleep in an EFCC Cell.

We urge @officialEFCC not to be distracted by the drama BUT to thoroughly investigate the allegations of grand corruption against Mr Fayose and if there is evidence, to bring him to justice fairly. EFCC should use this as a test-case to end impunity of alleged corrupt governors https://t.co/ZkF01bplSr

EFCC asks that Nigerians disregard the audio recording because it is “fake”;

#Alert The EFCC alerts the public of an audio recording currently circulating in the social media in which Acting EFCC Chairman, Ibrahim Magu, purportedly made comments to effect that nothing will happen peradventure Ayo Fayose, ex-Ekiti governor dies in custody.

Comic relief from every comic event…

Ayodele Fayose submitted himself to the EFCC for investigation

Corruption is fighting back

According to reports, the EFCC has secured a court-issued warrant to hold Fayose for another 14 days and they claim that the former governor is beginning to open up to them. Read all about it here. And below for other topics of discussion on social media this week.

After costing Nigeria a win at the World Cup earlier in the year, Super Eagles striker Odion Ighalo is back, making Nigeria proud at the ongoing Africa Cup of Nations (AFCON) qualifiers.

On Tuesday, Nigeria sealed a 3-2 victory over Libya thanks to Ighalo’s second goal at the 81st minute.

The Super Eagles left it late but Odion Ighalo scored a fantastic 81st minute winner to make it 5 goals in his last two matches. ⚽ pic.twitter.com/Ahriohs0Nf

With six goals in the bag, Odion Ighalo is now the highest goal scorer at this year’s AFCON qualifiers.

Nah. This is not the Ighalo we took to Russia.

We should forgive him already

Okay.. I take every thing negative I said about Ighalo during the world cup

Ighalo is paying up his world Cup debt to Nigerians. We forgive you bro… #LIBNGA

Ighalo should open his Instagram comments abeg.. We don forgive am

I hear many people say that they have forgiven Ighalo. As if his life was in any way, shape or form diminished by your opinion of him. Football fans really overrate themselves. If you only support people when they are doing well, your opinion is irrelevant.

The moment Atiku made Peter Obi his running mate, things are getting better already.
Odion Ighalo scores a hatrick for the SuperEagles.
Drake and Chris Brown squash beef.

Her: I bet he's thinking of other women.

Victor Moses be like: Ighalo allow these people miss me small nau…ehn pic.twitter.com/jOz5ceRuj4

Ighalo making a Syria Defender lie down on Green Pastures#LIBNGApic.twitter.com/LBfNITpymX

Ighalo is from Edo. He's fighting Libyans for what they did to Edo migrants going to Europe..😭😭😭

Theodore Yach was a Cape Town businessman and South Africa’s most renowned open water sea swimmers. He holds the record for swimming between the Cape Town mainland and Robben Island 108 times.

Theodore Yach reportedly died on Wednesday after being admitted with asthmatic complaints.

South Africans expressed their shock of his death on social media.

#Wesgro is deeply saddened to hear of the passing of Theodore Yach. As a Wesgro Board member, business leader, and sporting legend, he worked passionately to grow the Cape economy and create confidence in our region. We extend our condolences to his family, friends and colleagues

Saddened to hear about the passing of Theodore Yach, a real mensch. Asthma is a killer…

Rest In Peace Theodore Yach – the king of Robben Island. May your dedication to open water swimming in its purest form continue to inspire swimmers locally and abroad. What a loss.

Rest In Peace Theodore Yach. I remember you as a true gentleman. A massive loss to the commercial property industry and long distance swimming. A bigger loss to his family and friends. My thoughts and prayers are with them.

Rest In Peace Theodore Yach. I remember you as a true gentleman. A massive loss to the commercial property industry and long distance swimming. A bigger loss to his family and friends. My thoughts and prayers are with them.

Shortly after his death, many South Africans began calling for the renaming of the Robben Island to honour the legendary swimmer. However, it is reportedly being opposed by certain parties, read all about it here.

Cassie and Diddy split up

On Wednesday, we heard that American rapper Diddy and his long time singer girlfriend Cassie split up amidst cheating rumours, after over 10 years of being together, on and off again.

This gave rise to quite a discussion on social media globally. Nigerians as expected, were not left out.

When I hear diddy broke up with Cassie..

Diddy and Cassie split up after 11 years and y'all calling it a "breakup"?

"Marriage is not an accomplishment nor achievement" – yet they claim Diddy 'wasted' Cassie's time.

There's a fresh new level of dumb which yall excel at. Idiots. pic.twitter.com/EY3jq0OZwE

Weird how some women turned Diddy & Cassie's breakup into a money convo.

"She did not lose, she made money from him"

"He hindered her from building an empire"

Y'all still view relationships as a "if we no make money, wetin we gain" type of thing.

Diddy and Cassie broke up and it's Cassie that wasted her time? What about Diddy? Didn't they spent the 11 years together?

The fight for equality, one step forward, five steps backward.

It’s curious that if Cassie and Diddy were married for 10 years and got divorced, we won’t be saying he “wasted her time”.

But they dated for 10 years and split and we’re saying he wasted her time.

[Perhaps] This shows the premium we put on “marriage”

Cassie about to Start her Life. pic.twitter.com/XatchEidzK

Your longest relationship is 11 months, but you're forming relationship expert and instructor over Cassie and Diddy, that dated for 11 years. Lol

"@theDamorela: Cassie: baby when are we getting married??
Where is this our relationship going”

People from all over world are still talking about it. Read some of their reactions here.