Social Media Roundup: Nigeria as a major exporter of marijuana 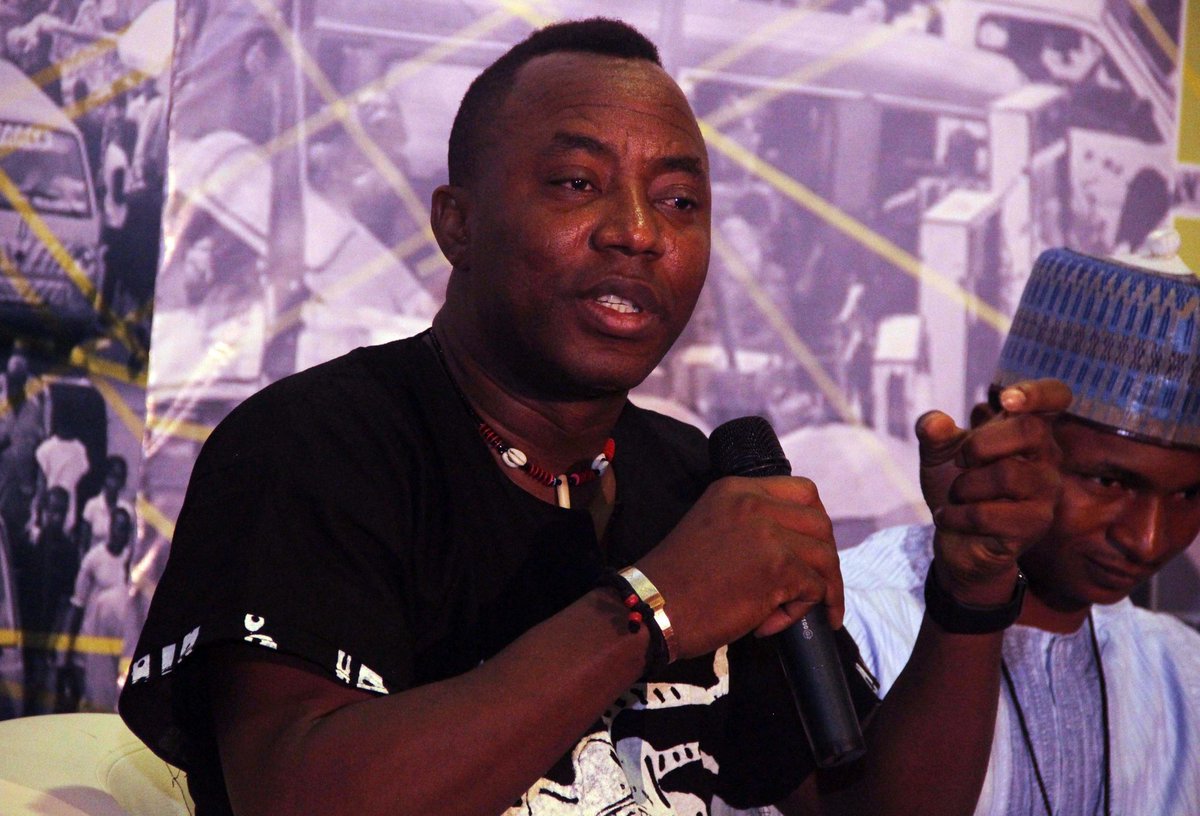 Speaking at an event organised by the Centre for Social Justice on Wednesday this week, Omoyele Sowore, Publisher of Sahara Reporters and presidential aspirant promised to make Nigeria a marijuana exporting country if he becomes president come 2019.

"We have to start taking care of our weed so that we can also contribute to the GDP of the world. Some of the best weed in the world is growing in Ekiti State & people are making billions from weed." – Presidential Aspirant Omoyele Sowore

Weed doesn't cure cancer and you can't smoke cocaine. I'm with you on legalisation tho but I doubt that will happen. MFM, RCCG, NASFAT & MURIC people won't agree. pic.twitter.com/tWXgCFHJuW

Presidential aspirant, Sowore says Nigeria Will Be Exporting Marijuana when he becomes President, He is already President. Your excellency sir.

He had earlier promised to increase the minimum wage

Why don't you all let us vote Sowore for president come 2019?
He said he would implement N100,000 minimum wage for workers.

If you fall for cheap lies this election season, you are OYO 🤥😏😛😁

Sowore said he will make the minimum wage N100,000 and you people are saying it is not possible , Then you clearly do not understand Nigeria's financial power. Therefore, I shall argue with no one.#TakeItBack #AfricanActionCongress

This goes out to all @YeleSowore's supporters.

Payment of the current minimum wage is a challenge for the incu mbent.

Please ask Sowore how he intends to fund the 100K minimum wage?

Sowore: Some of the best weed in the word are grown in Ekiti State

Now i know why Fayose use to say the best of nonsense talks. The best weed is planted in Ekiti. Omoyele Sowore must have been taking small small.

Read more reactions here and continue below for other interesting topics on social media this week.

For this year’s edition of the GQ Men Of The Year Awards, British super model Naomi Campbell’s date was Wizkid, Nigerian superstar musician.

9/5: Naomi Campbell and Wizkid attending the GQ Men of the Year Awards in London. [2] pic.twitter.com/2REgFPzruX

Wizkid and Naomi Campbell look the perfect couple, together at the GQ Men of the Year Award show #GQAwards https://t.co/0Q8QMyYPQA

Wizkid have upgraded from Sista Tiwa to Hanty Naomi🤔 …small boy with a Big Hanty!!! pic.twitter.com/Idyz2AutOD

If people are tagging Wizkid and Naomi Campbell as 'Goals😍😍', then what is Wizkid And Tiwa Savage?
Offside? pic.twitter.com/MdAu20c1J6

This Wizkid and Naomi Campbell gist is the new face of "Small Boy Big God"..
Starboy👊👊
😂😂😂

Starboy drippin’ in a suit! 😳 Christmas came early this year 😂🔥

Is Wizkid in suit not amazing😍😍 pic.twitter.com/9kvb31rgMD

wizkid in a suit 😍😍 can’t wait for our wedding ❤️

This week, British-Nigerian rapper Skepta released the video of Energy (Stay Far Away), his recent collaboration with Wizkid.

Wizkid VS Davido banter, for the umpteenth time

Davido is 💯 yards better than Wizkid…

Stop comparing people. Wizkid and Davido, Messi and Ronaldo. Just appreciate greatness. You can have a preference, that's fine. Just stop arguing about who's better. Like the great Linkin' Park said "In the end, it doesn't really matter"

This week, news broke that the Nigerian Football Federation (NFF) has been fined and banned from the federation for one year.

Nigeria’s top football coach Salisu Yusuf has today been banned from all football-related activities and fined after an investigation into bribery allegations.

A one-year ban is a slap on the wrist for Salisu Yusuf, in my opinion.

"Super Eagles" its worrisome that the SALISU YUSUF "judgement" can't be found on the @thenff official twitter handle. neither on the NIGERIA FOOTBALL FEDERATION WEBSITE.. why??? this is not good enough.. ethically not proper!!shows that we might be condoning such act indirectly

So 'bribe for selection' @NGSuperEagles Coach Salisu Yusuf got only a year ban from the NFF?
Just a slap on the wrist.
…and you can be sure it will be typical Naija type of ban where he continues at the background and continues to get paid.#NigeriaWehailThee#MTIDNU

The NFF should have just fired him. Is he the only good football coach in Nigeria? He was recorded collecting a bribe, we all watched it.
Your company will fire you for less.

1. Impersonating/posing as an agent
2. Collecting a 1k bribe.

If @thenff is a serious body, Salisu Yusuf would have been banned for LIFE. Arraigned in court and sent to jail #thisisNigeria

Says a lot about a country, when her journalists make a case corruption…

Say all you want.. Salisu Yusuf should not be allowed around Football again after this disgraceful act.

Salisu Yusuf suspended for 1 year with a fine of $ 5 000 after journalists trapped him accepting $ 1 000 so called bribe. Why as Africans we do allow BBC to dictate how we do things here? So every time I will give money to a player because he played well, is it corruption?

Absolutely DISGRACEFUL and SHAMEFUL that all Salisu Yusuf got from the NFF is a one year ban & $5,000 fine! That's a slap on the wrist!

Salisu Yusuf is another example that indeed it pays to be a criminal in Nigeria where tolerable corruption is the order of the day!

Steal money, Collect Bribe, Give Bribe
When caught, bribe the panelists
Get a soft punishment

Who else didn't know of "Salisu Yusuf" until this ban?

It all started last week when ace Ghanaian rapper Sarkodie publicly supported Nigerian artiste Peter Okoye of P-Square. This pissed off many Ghanaians off as they accused Sarkodie of not supporting his fellow Ghanaian artistes.

During an interview on Hitz FM this week, controversial Ghanaian musician Shatta Wale called Sarkodie out for being a hypocrite, among other things. Watch below.

Not a Shatta Wale fan in the least bit but what did Shatta say in his interview about the current state of things that isn't true?

Wait oo.. what answer did you want to here??
Listen to the interview and all what was said in shatta wale(pbuh) is the Truth.

Just imagine there's an investor out there listening to this Shatta Wale interview. Up & coming musicians should pray hard. This music/entertainment business is a joke. No wonder the government has given a deaf ears.

I never listen to Shatta wale in an interview & he talk sense before. Non fat saaah. 🤦🏾‍♂️ Nii Mensah we taya you

Battle of the fans

I blame @sarkodie for shatta Wale's rants. He keeps calling him out all in the name of "love" on every big stage he performs. Now the lil prick thinks he's at par with Sarkodie.

Dear Sarkodie fans , this is the bitter. Truth but pls u guys should stop living in the past cos honestly apparently shatta Wale is bigger than sarkodie and there is nothing u can do about it and let's not forget shatta is the greatest Ghanaian musician of all time ..G.O.A.T👑👑

Sarkodie's time has passed for a long time. He was always riding on Shatta Wale's Reign, the only place he was reigning was on Twitter that one too we are taking over from him.#ShattaSark

In the past 48 hours, residents of Nigeria’s capital city have been complaining about occasional earth tremors. They are worried, as they should be.

These Abuja tremors are becoming worrisome.

I experienced a tremor today for three consecutive times in some part of Fct Abuja. Between 4:30, 6:15, and 8:20 pm. Resulting to violent shaking of building. I hope this is not an early sign of earthquake.

Another heavy tremor just occurred at 6.01 a.m. in Maitama, Abuja. Truth is, this seem like a warning for an earthquake. I think the authorities should do some scientific investigation or evacuate residents as a matter of precaution.

The whole Abuja is vibrating. It happened yesterday and it’s happening right now. Anybody felt it? Could it be an earthquake?

So is it just me or is Abuja vibrating?

We have all been feeling the earth tremors in Abuja and surrounding areas over the last 48 hours. I know that many people are scared, but please, remain calm and vigilant.

I have informed the FCT Minister and Perm Sec. on the scaring earth movement in some parts of Abuja at 6:11am. I felt earth tremors in my home in maitama too. Measures are been taken to address the problem.
I will keep the FCT administration on their toes on this.

Abuja is NOT an earthquake zone. What we experience may be as result of man activities(borehole drilling, rock blasting etc) which result in seismic movement in the plaint.

Sad thing about this Abuja earth tremor is that people who are supposed to be Geologists are already working In GTBank.

No Agency to trust 😭