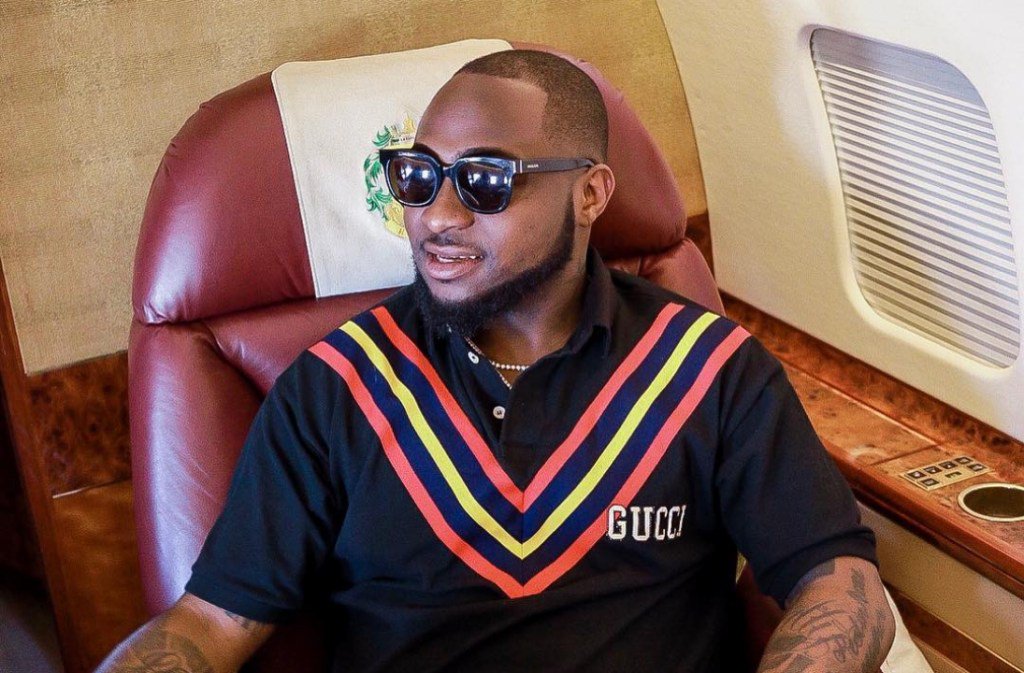 This week, ace Nigerian musician, Davido took Nigerians by surprise when he revealed that he had registered for the one-year mandatory National Youth Service Corp (NYSC) to “tie up loose ends”.

Davido, who studied Music at Babcock University, graduated in 2015 but waited until 3 years after to register for the NYSC scheme. Here’s how Nigerians reacted on social media.

Davido go just go NYSC camp listen to all these Soldiers and Man o’ War parade songs, come back, add kiddominant mad beats and package them for us.

During the NYSC SAED program, don’t learn how to make SOAP. I repeat, flee from that section. Just go straight to the coding class. 🌚

Ehen! We rise by lifting others 👀🌞🔥

See as them make my cousin sit down ground to watch OBO for Lagos camp @iam_Davido 😂😂😂😂. pic.twitter.com/WMOiKyawa8

But wait oh. How did Davido get Khaki before entering camp? pic.twitter.com/akxd3CWjEJ

Meanwhile, Chioma, Davido’s girlfriend came up in the discussions

So you mean to tell me that Davido is doing NYSC asin he's serving his Fatherland but his gehfriend aunty Chioma ran away from school to be traveling upandan with him?

It was on this same app we celebrated Davido getting some TV deal for Chioma. You can't see that as d reason why she is dropping out cos it won't fuel your agenda, she can't drop out to do other stuff for herself, it has to be a wicked man spoiling her life.

Some people believe Davido might be planning to run for political office in the future, while others think he just enjoys the spotlight.

Theresa May in Africa

This week, British Prime Minister Theresa May embarked on a 3-day African tour. Her itinerary included visits to South Africa, Nigeria and Kenya to promote British trade ahead of the country’s scheduled exit from the European Union next year.

“As friends, partners and equals – we will secure a more prosperous future for all our people.” – PM @Theresa_May talking about the future relationship between the UK and Africa. #UKAfrica pic.twitter.com/rKxWDYbxsA

PM @Theresa_May spent her second day in Africa in Nigeria, where she heard the stories of survivors of modern slavery and met inspiring young traders eager to break into the world of finance #UKAfrica pic.twitter.com/Ib5yLvKWhG

“Our cooperation today makes our people safer, more prosperous and more secure – here in Kenya, and in the UK.” – PM @Theresa_May in Kenya today #UKAfrica pic.twitter.com/0Kz4rbGBl1

Theresa May in South Africa

Lock away our land, gold and diamonds, the leader of the UK, Theresa May, is coming to South Africa.

Theresa May looks flat fukken desperate. If South Africa had its shit together, we could reverse colonize these people, and own Big Ben and Heathrow and stuff. #brexit

EFF Leader, Julius Malema says the time has come for South Africa to pull out of the Commonwealth nations has arrived. He was commenting on the official visit by British Prime Minister Theresa May to the country today.

Theresa May in Nigeria

It's cool to see our president and governors welcome the British prime minister in a big way to nigeria but I've just never seen Theresa may welcome our president in a big way and he goes to London a lot. We need to start treating people the way they treat us..

Theresa May visited South Africa and Nigeria – as a somewhat knee jerk response to #Brexit.

Angela Merkel is visiting Senegal, Ghana and Nigeria because the number one issue in the EU is illegal immigration.

It's not like either leader has some "grand strategy" for engagement.

Britain🇬🇧a Christian Nation. Tens of thousands of Christians have died in Nigeria since 2015 till date. The @UKParliament & @theresa_may are not concerned about the death💀 of these innocent people rather they’re only interested in the oil, why dis wickedness?@nlitvin @realFFK

Theresa May is in Nigeria. Babalawos you have one job…

Theresa May in Kenya

Theresa May reportedly said “87 million Nigerians live below $1 and 90 cents a day, making it home to more very poor people than any other nation in the world.” Over 30yrs ago, I covered Margaret Thatcher's visit she said Nigeria is a rich country full of poor people' Hmmmm…🤔

Whilst Theresa May was dancing in South Africa, the UK has:

there is something deeply ironic about Theresa May's trip to Africa when she was the enforcer of the Hostile Enivroment. 'Trade with us, but don't come to the UK or you will be deported'

Theresa May is currently in Nigeria as part of her first official visit to Africa, but she isn’t the first British head of government to visit Nigeria.
Here are five others that have visited Nigeria.#AlecDouglasHome #MargaretThatcher #TonyBlair #DavidCameron #TheresaMay pic.twitter.com/KlB9UDeEVg

In the light of Theresa May being in Nigeria 😊 pic.twitter.com/wPiSojJFDU

DJ Cuppy is not a feminist

In an interview making rounds on social media this week, DJ Cuppy, popular Nigerian DJ and daughter of oil magnate Femi Otedola revealed that she no longer identifies as a feminist. Watch the video below.

As expected, this caused an uproar on social media, especially among feminists.

Dj cuppy thinks people look down on her in her industry because she is a woman but at this same time she doesn’t think feminism will solve that issue..😂😂😂 time out please

“I use to be a feminist until I realised that I didn’t really understand it.” – DJ Cuppy

This was the most important part of that video because a lot of folks are angry/fighting but they don’t understand the what/why they’re fighting. First things first, get understanding.

Face your bitterness in peace.

She doesn't want to be among women who hate men for no justifiable reason because that's much of the feminism we see in Nigeria & Twitter.

Even Linda Ikeji who asked y'all to stay celibate was collecting prick low key.

2. You can't change the oppressors opinion, so why bother. Your average Nigerian's attitude to systems of oppression.

What DJ CUPPY was actually saying is that rather than fighting to change the opinion of some men towards women, we should actually channel that energy to building ourselves

If we're being honest, Dj Cuppy is a feminist. Why? She does women empowerment programs. You don't have to identify as feminist but once what you do is aimed at freeing women from systemic & institutional marginalization/oppression or supporting the women agenda, you're feminist.

On the show, Peter Obi discussed Nigerian politics and the state of the nation’s economy. Watch it here.

You are borrowing money and the issues that it was supposed to affect is not coming down. Poverty is increasing, out of school children have moved from 10 million to almost 12 million. – Peter Obi. #Sunrisedaily

In a state in the north, the number of children that sat for WAEC is 128. A state that has about five million people. – Peter Obi. #Sunrisedaily

Unemployment is worsening, in 2017 alone our unemployment moved from 14.8% to 18.8% this year, which means more people have lost their jobs. – Peter Obi. #Sunrisedaily

The entire capital votes this year 'is' borrowed, and we have existing debts already. – Peter Obi. #Sunrisedaily

"I remember Ngozi Okonjo-Iweala @NOIweala, crying everyday, begging us to save these monies & save for D rainy day. All of us 'the Governors' DISAGREED. We said lets share it" – Peter Obi
Now, some of those 'us' are blaming past Govt for not saving@sunrisedailynow #SunriseDaily

When you are borrowing for consumption, it gets to a stage where you cannot control it. – Peter Obi. #Sunrisedaily

Some Nigerians were not impressed

Peter Obi is a liar and pessimist. All he wants is to discredit the effort of the PMB govt.

You want Nigeria to become a heaven in 4 years.#Sunrisedaily

I’m seeing people say Peter Obi FIXED Anambra. Which of the Anambra please? The one that has Onitsha, one of the most disorganized and the dirtiest city in Africa competing only with Aba?

Funniest thing is, same people insult Ngige who in their terms, equally did very well

They always have solutions when they leave power. Peter Obi was part of the 22-man team that handed over a doomed economy. Watching his pontification on Channels TV is nauseating

The best president Nigeria never had should be Peter Obi. Quote me if I'm wrong. We will keep telling you the sad truth. Call me PDP I don't care. But let's continue to play this politics of bitterness and hatred.

What brilliant combo. Won't be a bad idea come 2019…. pic.twitter.com/m6ZJX2Sdwf

For me we all should endorse Mr Peter obi for president 2023, having him as the vp sef is an insult to his personality!

Peter Obi would make a better president but the way this country is set up, power is going to remain where we have the highest number of senseless voters.

Other trending topics this week