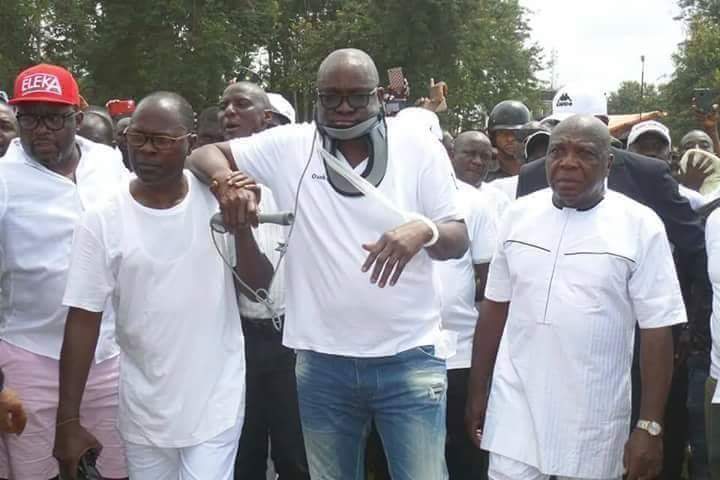 On Wednesday this week, in lieu of the Ekiti state gubernatorial election scheduled for tomorrow, July 14, 2018, members of the Peoples Democratic Party (PDP) took to the streets of Ekiti for a rally.

However, the rally tagged ‘Victory Walk’ for Olusola Kolapo Eleka, the candidate of the PDP, was reportedly interrupted by officers of the Nigeria Police Force. Read all about it here.

According to reports, the policemen repeatedly fired teargas cannisters dispersing the crowd and somehow, Ayodele Fayose, incumbent Governor of the state managed to break his neck and hand during the “attack”.

A display of tyranny by the presidency

A Northern governor would never have been humiliated as they did to Fayose yesterday.

You can decide to remain stupid and daft because of ur hatred for Fayose or loyalty for Buhari, while they keep invading your ethnicity.

They value their cows more than you (southerners)

Police fired teargas into a lawful assembly, but because you don't like Fayose, you think such tyranny is funny. Nigerians in Nigeria, remember you cannot afford to be this myopic. They will take you one by one if you are. https://t.co/3t3VaGoN0Y

Making today’s assault by Buhari & his tyrannical govt on Ekiti State solely about Fayose & your feelings towards him has served as a blanket to cover the brutality suffered by Ekiti people who were teargassed and shot at today.
How many more Nigerians to suffer for your bias? pic.twitter.com/SaWMzP2U8f

What’s happening in Ekiti is that in 2014, PDP used force to secure votes; in 2018, APC is using greater force to the extent of assaulting the governor to secure votes! But Nigerians are using 2014 to justify 2018 forgetting that we’re losing our democracy by normalizing such!

Many Nigerians are of the opinion that Governor Fayose was merely putting up a show.

"@eklektika2806: Who would win this year's Balon D' Floor? Like for Fayose, RT for Neymar. 😂😂@Gidi_Traffic pic.twitter.com/BXdNB4iw0H

A customized teargas breaks Gov Fayose's neck and hand in the midst of his staff in Ekiti State.

"I didn't say Teargass broke my neck, it was a slap one of the policemen gave me."

It is totally callous, insensitive and wrong to say “Nigerians were being killed before, so there is nothing wrong with deploying 30,000 policemen to Ekiti now.” People that say so miss the point quite deliberately. We must not let partisan politics rob us of our conscience.

Whatever is happening in Ekiti State is a window to 2019 elections. Surprised it is funny to some of you, for me it is scary. You don’t need to like or hate Fayose, what we allow today will continue tomorrow.

Read more reactions here and below for other trending topics on social media this week.

Kemi Adeosun and the NYSC saga

Here’s a summary of the report;

Here’s what the presidency had to say;

Nigeria’s information minister says the Buhari administration “have nothing to add” to what has already been said by the NYSC on Finance Minister Kemi Adeosun’s exemption certificate.https://t.co/ZgYSUE4WZp

The Buhari administration is corrupt

If Kemi Adeosun didn't forge NYSC Certificate, she should talk now and defend herself with credible no long story evidence, otherwise, he should just SalisuBuharilized herself and save us unnecessary noise.

Babachir not charged for corruption

Silence from every quarters that matters. Now we are moving on.

Coincidence? We think not

Apparently, before she was cleared for her current appointment as the Minister of Finance, The Senate detected the discrepancies but cleared her anyway.

Wow!Kemi Adeosun sought Executive Order to get all agencies to submit how they spend money n

So the Senate knew Kemi Adeosun forged her NYSC documents but kept quiet?

I suspect this is mart of Saraki's revenge…… pic.twitter.com/Xdove9Ylst

This scandal on Kemi Adeosun’s NYSC certificate should not end there. @PremiumTimesng should go a step further and name the members of the NASS who used the alleged compromat for blackmail and extortion. Those are equally crimes under Nigerian law. pic.twitter.com/GPXt6ErcVc

Unpopular opinion: there may not be any connection between the release of funds to NASS by the Hon. Minister of Finance, Mrs. Kemi Adeosun and her alleged non-participation in national service and forgery of NYSC certificate.

Before someone will come and say I didnt do NYSC like Kemi Adeosun.

If skipping NYSC can make our graduates become as good and as sound as Kemi Adeosun, then, I will be ready to be an advocate of NYSC skipping.

Rare picture of kemi Adeosun, during her NYSC, she was in platoon 10. Can we move on already. pic.twitter.com/haqkTRrVYu

Read this thread. This too.

This week, the semi final match at the 2018 FIFA World Cup between England and Croatia took place. While the #WorldCup hashtag trended on Twitter, #ItsComingHome also did.

The song was released in 1996 when England hosted its first major football for 30 years. And since football was invented in England, they were optimistic that the trophy would return home this time.

The anticipation before the match

The FIFA World Cup 2018 final match is coming up this Sunday, July 15.

During the same interview, Yemi Alade said that she’s on the same level with Wizkid and Davido. Watch below.

As a result of everything that was said during the interview, Yemi Alade is trending on Twitter Nigeria.

Here are a few reactions

You can criticize Yemi Alade from now till tomorrow, it's all good but just know she's the biggest female artiste in Africa read well i didn't say best, i said biggest if you doubt it's fine but just know if you reply this with epistles I'll still not reply and argue with you. pic.twitter.com/lBohnso8vi

Yemi Alade has toured worldwide since Johnny dropped. Probably Nigeria's most successful female post '99 act and certainly its must successful touring act. And one of the top two best live artistes, if not the best, currently.

She’s a great performer but her music is mediocre

I can see that you people want to turn the discussion around Yemi Alade to a "prophet has no honour at home" thing.

We know that she gets mad love in east africa and other countries.

We also know that she has a tendency to sing rubbish.

If Yemi Alade had said she's part of top 10 biggest artistes in Africa that could have been better, but she got it wrong when she said she's on the same level with Wizkid and Davido. Currently there's nobody on their level locally and internationally.

Some Nigerians are hypocrites

Anyone who calls Yemi Alade's music poor and celebrates Wizkid's music is a hypocrite.

A lot of your male artistes churn out songs with questionable content and you still bop to it but cast Yemi Alade to the gallows cos she’s repeating one line three times. 🙄

Nigerians – forever pressed when you don’t cater to their fragile egos.