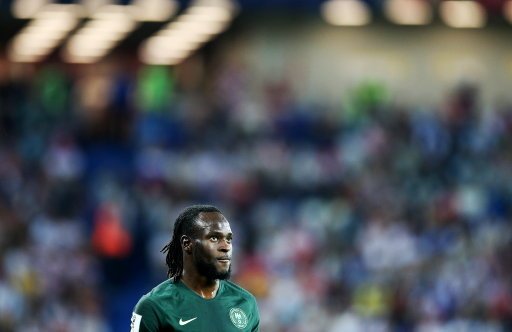 Tonight, Nigeria’s Super Eagles played against Croatia in their first match of the 2018 FIFA World Cup. Nigerians and indeed friends of Nigeria from around the world were very optimistic about the match.

Good luck to the @NGSuperEagles today in the #WorldCup 🇳🇬🇳🇬🇳🇬

Thirty one minutes into the match, Super Eagles midfielder Oghenekaro Etebo scored an own goal, giving Croatia a 1-0 lead against Nigeria.

GOAL! Croatia take the lead! In off Etebo for an own goal. #WorldCup #CRO #NGA pic.twitter.com/8DLmcQlWRq

The last three own goals at the #WorldCup have all been scored by African nations:

The last two goals Nigeria have conceded at the tournament have both been own goals. pic.twitter.com/T7dZF5ISAr

Meanwhile Nigerian winger, Victor Moses failed to hold his own on the pitch

MOSES should have worn a pyjamas since he came to lay on the pitch. #WorldCup #CRONGA pic.twitter.com/KsdwiMD0X1

Is banana peel under Moses boot or something? #CRONGA pic.twitter.com/ahZRqy9EtE

Then Alex Iwobi was replaced with Ahmed Musa

At about the 62nd minute, Arsenal forward, Alex Iwobi was substituted for Ahmed Musa, to Nigerians’ disappointment.

I’m still trying to understand why Iwobi was removed!!!! Like he’s the only one trying to give us a goal…the only one with a good shot at it so far. Call me clueless but this coach is doing “try your luck” please. But ok #CRONGA

Felt like subbing Iwobi out was the wrong move. l'd have brought Iheanacho on for Ighalo.

Stop doing drugs ! Only a man on drugs will off Iwobi for Musa 🤷🏽‍♂️

The penalty that led to a second goal

Nigeria’s William Troost-Ekong was booked in the 70th minute for pulling back Croatia’s Mario Mandzukic. This led to a penalty kick played by Luca Modic and Croatia’s second goal.

This is the first penalty ever given for cuddling #CRONGA

Why would you hold Mandzukic like that? Is he your wife? 😭 #CRONGA

Aleast our jersey sold out 🙂 pic.twitter.com/ERF5B7fHbZ

73 minutes into the game, Odion Ighalo was substituted for Kelechi Iheanacho. A move which many Nigerians believed should have come earlier.

"@OfficiallollyB: After this match, please get your PVC……. This is all the fault of those in power. They must go!!!!! #CRONGA #WorldCup @Gidi_Traffic pic.twitter.com/73191BTC8m

May this not turn to waste of gen 🙏🏻😓#CRONGA

#CRONGA
The Nigeria we expected in Russia

The match finally ended with a 2-0 triumph, in favour of Croatians. Nigerians believe that the Super Eagles could have done better and are optimistic about their next match against Icelend on June 22.

Too busy for 2018 FIFA World Cup? Follow the tournament with these 7 apps.