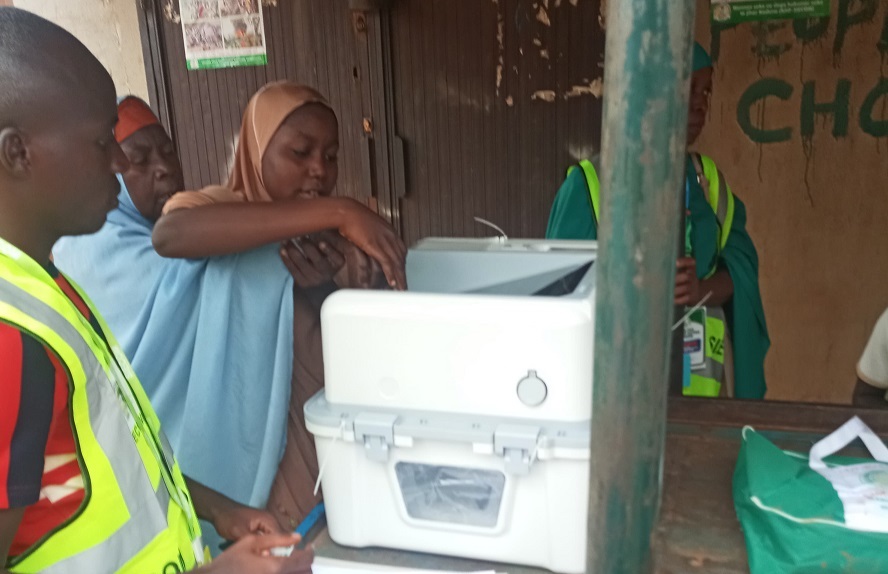 Globally, 26 countries conduct elections with one form of electronic voting or the other with some even allowing internet ballots for general elections. In 2014, Namibia joined the list becoming the first African country to conduct an e-voting election. Nigeria has made moves too.

In 2017, the National Agency for Science and Engineering Infrastructure (NASENI), unveiled a solar-powered electronic voting machine that was reportedly made in Nigeria. Ever since this announcement, Nigerians have clamoured for electronic voting in the 2019 general elections but this may be a bad idea.

Kaduna State recently made history when it pulled off Nigeria’s first electronic voting in its local government elections.

Even the Independent National Electoral Commission (INEC) itself agrees. In April, chairman of the commission, Prof. Mahmood Yakubu, announced that electronic voting will not be used in 2019, citing the lack of a legal framework as a plausible reason. But there are more reasons.

In a step by step approach let us examine the probable reasons Nigeria is not ready for electronic voting in 2019.

Prof. Mahmood is correct. In electronic voting, technology is a second layer in a complicated wrap. Before e-voting can be implemented, laws have to be made by the National Assembly to give INEC a legal go-ahead.

In Kaduna, because of the absence of necessary laws, the local government election was postponed, suspended and moved from its original date of 30th December 2017 till May 2018; a nearly 6-month period.

Nigeria’s 2019 general elections are 275 days away and as the National Assembly is not famous for timely bills, no resolution will happen on the matter in this “short time.”

A good example is that INEC’s budget for the 2019 elections is reportedly not in the 2018 appropriation bill because of a delay in the passage of the Electoral Act.

If by a stroke of unlikely miraculous luck, necessary laws are implemented to enable e-voting before 2019, financial restrictions will pose another hurdle.

INEC reportedly spent ₦108.8 billion in the 2015 general elections. And for 2019, the commission has a ₦300 billion budget, a figure Sahara Reporters claims may not even be available.

These huge sums are for a traditional paper balloting ; procurement of Ballot Boxes, Ballot Papers, Result Sheets and Smart Card Readers as the only technological consideration.

Purchasing electronic voting machines for the 2019 elections is apparently not feasible.

For general elections, the Voter Verifiable Paper Audit Trail (VVPAT) Electronic Voting Machine (EVM) as used in the Kaduna Local Government elections will not suffice as they are tied to PVC verifications.

This is because PVCs have ceased to be full security measures with reported cases of political parties buying them in rural areas, and registered underage voters. A combination of EVMs and biometric scanners are the only means of ensuring a near 100% free and fair general election with electronic voting.

These biometric scanners will ensure that only those present and accredited get to vote. And there are many options to choose from.

Fingerprinting is another. The machines used in Kaduna already have fingerprint scanners which can easily be outfitted with a local database to curb double occurrence of votes.

Without one or even a combination of these biometric security technologies, there is still much to be feared with an EVM. And ultimately, execution of these technologies still point to  monetary expenses.

In the Kaduna local government elections, the electorate were eager to vote but most did not understand the basic workings of the EVM. Imagine this problem on a national scale.

In January, INEC said the number of registered voters stood at 74 million and even at the current rate, voter education in Nigeria is still very low. With 275 days to go, it will be impossible to acquaint this large number of voters with a completely new way of doing things.

In this regard, Engr. John Habila head of ICT at the Kaduna State Independent Electoral Commission (KAD-SIECOM) says Nigeria won’t be ready for electronic voting at its general elections anytime soon.

“The general process for setting up electronic voting takes time, especially with education, sensitisation and research. Even deciding the particular kind of technology to use is another time consuming factor. INEC does not have enough time to execute all these before 2019,” he says.

The 2019 general elections are off the table for e-voting, but 2023 is around the corner and if INEC does not start right now with education and planning, we may still not be ready by then.