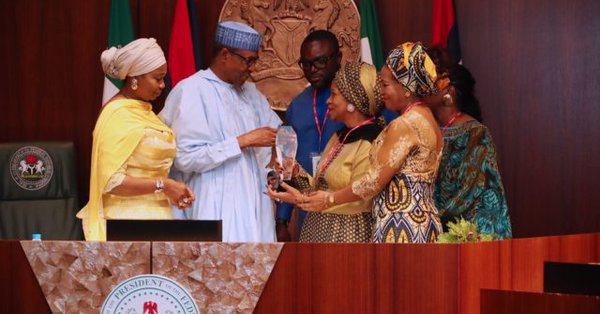 On Wednesday, we saw this:

The award given to President Buhari of Nigeria was not given by The King Center, at the request of The King Center or by the children of #MLK and #CorettaScottKing. @MrFixNigeria

The King Centre is an initiative established by the King family in memory of Martin Luther King (MLK) to promote non-violence. The award reportedly cost the presidency $3 million with Abike Dabiri, Senior Special Assistant to the President on Foreign Affairs and the Diaspora running the show.

Turns out the award was presented to President Buhari independent of the centre by MLK’s sister-in-law, Dr. Naomi Barbara.

The Martin Luther King Jnr award to Buhari yesterday is fake. The king Family has distanced themselves from the award.
Buhari has once again been scammed. Abike DABIRI smiling to the Bank with her loot!😂😂😂

Abike Dabiri cooked the award, got funds from the Presidency, called Erica Bennett, an African American based in Accra. Bennett contacted Barbara King, a sister-in-law to MLKjnr in U.S, they packaged, called it MLKjnr award and delivered to Buhari for $3million. That’s the story!

Apparently Martin Luther King jnr's family did not give President Buhari an award, THEY LIED😢 pic.twitter.com/ujMuMJFX4v

The Federal Government of Nigeria tweeted about President Buhari receiving a fake award! A parody has parodied a parody! https://t.co/SGDDlTlMPb

Abike Dabiri brought a group of impostors to Nigeria, accommodated them, then took them to meet President Buhari to give him a fake award for the gram. https://t.co/D0GYBhive1

Could this be the reason?

This is why Buhari and his goons were desperate for an award connected to #MLK. 😂😂😂 pic.twitter.com/2Yy71ji69N

Buhari is a scam

He would not hold a media chat with Nigerians but will readily accept a fake award.
Buhari is a big scam.

Shameless people, Buhari and his people. Imagine making a song and dance of an award presented by Martin Lurther King's brother's wife in HER PERSONAL CAPACITY.

No previous winners. No backing by a governing board. Just a plaque picked up from a store with no meaning.

Nobody scammed buhari for any award. The man is corrupt and lack integrity. He and his cabals organised the award themselves thinking everyone reason like almajiri.

…Name a better achievement better than the above. I will wait. 😭😭

I see people are trying to absolve Buhari of complicity in the fake award saga. No, we have to set that record straight!

Buhari’s Government has been about deceits and lies – and this is one of them.

If anyone had told me that President Muhammadu Buhari was desperate for awards, I would have arranged for some awards for him from John F. Kennedy's neighbors that I used to work with when I was a cab driver in Boston. @MBuhari @NGRPresident pic.twitter.com/ieBWL7uaMP

Buhari will soon win a Nobel prize, after which we will hear that the Award was presented by a different family organization set up by Alfred Nobel's brother's wife's uncle.

Buhari faking an award is another reason why I need to go to the abroad.

Read this thread of the supposed story behind the award, and this too, for the Presidency’s version of the story. Read on for other trending topics on social media this week.

In lieu of the President’s visit, the Lagos state government declared Thursday, March 29 a public holiday.

The work-free day will enable Lagosians come out enmasse to welcome President Muhammadu Buhari who is on a historic two-day visit to Lagos State. #PresidentialVisit pic.twitter.com/dtm2IueP74

Areas to be affected by the traffic diversion include Bank Anthony Way in Ikeja, Agege Motor Road, a section of Eko Hotel Road in Victoria Island and Old Marina in Ikoyi axis. #PresidentialVisit

Adequate preparations have been made to mitigate the impact of the road diversions on residents, while access would be given to any emergency situation. #PresidentialVisit

Work free day to welcome the president of your own country 🤣🤣🤣! Why do our leaders take turn in ridiculing us on this continent? #presidentialvisit indeed. #Nigeria pic.twitter.com/TP8LUMD0x5

Sounds like we are in the village and the town crier goes, Keeeeereeee oooo📣📣📣, Oba ni ka so fun yin pe

The president that a governor claims is so loved by his people had to close major roads in the city bcus the president is coming . You are so loved yet so scared #PresidentialVisit #wasted

President @MBuhari arrives Lagos State for a 2-day official visit. In Lagos he will commission some projects and attend the Bola Tinubu’s Colloquium #PMBinLagos #BTC10 pic.twitter.com/Rss3yoCPrV

People standing under the scorching sun were not allowed to use Pedestrian bridge because one Ghost worker is in Lagos. When one of them asked why, she was beaten and harrassed.
The last picture is my reaction. #PMBinLagos pic.twitter.com/scs9zyEcx7

"@hmeelarh: State of things in IKEJA ALONG, LAGOS this morning; Roads are blocked and Lagosians trekking to their work places all because the president @MBuhari is visiting . #ImagineNigeria #PMBInLagos @Gidi_Traffic pic.twitter.com/c14MR1cje8

And this was the traffic situation at Lekki phase 1 roundabout today #PMBinLagos pic.twitter.com/pHfTQdeEzT

Me when the Nigerian police says we can't use the pedestrian bridge cuz the President is in lagos @Gidi_Traffic #BBNaija #PMBinLagos pic.twitter.com/RphBNvScd9

"@obitalks: @MBuhari please please tell the Army/Police to free up #MARINA so that hundreds of hardworking #Nigerians can go home and rest please this is very bad and this is just 9:15pm @Gidi_Traffic please help us #PMBinLagos #GIDITRAFFIC pic.twitter.com/SuK2Jpb02Z

This is how i got to the office today. Was one of the extremely lucky few that got bike that took me from Egbeda to Mangoro for N1000 leaving to trek to Ikeja from there. Thousands have to trek from God knows where to God knows where

President Buhari’s other activities in Lagos

President @MBuhari, Vice President @ProfOsinbajo and his wife, and several dignitaries joined @AsiwajuTinubu at the 10th edition of the Tinubu Colloquium in commemoration of Ashiwaju's 66th birthday marked today at the Eko Hotel in Lagos. 📷; @novoisioro #PMBinLagos #BTC10 pic.twitter.com/ZAZhNyPcCB

President @MBuhari this morning in Lagos unveiled the new Ikeja Bus Terminal, one of the elements of the Bus Reform Initiative of the Lagos State Government. @followlasg #PMBinLagos #AsoVillaToday pic.twitter.com/ZaFh2tYIWL

If the new Ikeja Bus Terminal had to be commissioned, the Ikeja LG Chairman could easily do it. But the president! Just like magistrates gathered in Yaba to commission an inverter! Let's stop this farce, for God's sake, and settle down to serious work. @followlasg #Productivity

If PMB was invited to commission IKEJA bus terminal, @Gidi_Traffic abeg who will be coming for Oshodi projects upon completion?

Lagosians Treck for @MBuhari no thanks to @AkinwunmiAmbode add that to the almost N900Million manpower loss for the day. Then the Ikeja bus stop will become the expensive bus stop, sorry "bus terminal" in the world
📸 Credit @OladapoAwobeku pic.twitter.com/q1ukWeKRdq

Is there any other country that shuts down it’s airspace, including for commercial flights, when a democratically elected leader is traveling? Very interested to know. #PMBinLagos

#Lagos under gridlock. These are some sites of the mega city I guess #PMBinLagos will not see. pic.twitter.com/HNaFgC7EEq

So I heard that Buhari went to Lagos for his last supper with the south west and he’ll be betrayed with a kiss from Tinubu Iscariot. However unlike Jesus he won’t resurrect. Nigeria has rejected this fake messiah.
😒😒😒#BuhariIsIncompetent #PMBinLagos

Feel free to share your experience with me in the comments section.

This week, popular Nigerian musician Brymo released his sixth studio album titled Oso. The talented artiste also released the visuals of one of the songs in the album, Heya. Watch below.

Brymo’s controversial outfit in the video had everyone talking.

Here are a few reactions.

Art in its purest form

He's pushing the boundaries of art in this part of the world and doesn't care what y'all think.

#Brymo
Good and meaningful song, a bit disturbed about the costume though, but it's so African, it reminds me of "gods must be crazy"

Creativity is unmatched when your mode of reasoning is different from others.#brymo

This is nothing but wonderful Art. Salute Mr #Brymo pic.twitter.com/z9w9DpRFMJ

before you insult #brymo take time to differentiate art/culture from nudity!!!

Have we found the modern heir to Fela's throne? #Brymo pic.twitter.com/nOy6WJnM2D

Going bare arsed is art? Let’s face facts, #Brymo dropped this album and people that know his art didn’t hype it, He drops the nude image from the video on social media now every one is talking. That was a stunt not art… argue with your pastor 🙄

Brymo – "Olekuuu. Tell me something wey I no fit doooo…"

"I bet you can't play piano under a bridge in the hot sun… Wearing a G string.."

Lol Brymo doesn't send you people. He's doing his own thing with his chest & bumbum.

First thing I've noticed is that the songs on this album are short. The album itself is short; 38 minutes for 11 songs. Wawuu! #Brymo

Here are a few reactions to the news on social media.

Linda Ikeji just got engaged to her wife!!! I'm so happy for her cos I know she'll make a great husband!!!! 🙌🙌🙌🙌 #lindaikeji

The same people who said Linda Ikeji will not see husband because of her wealth are the same people saying she got engaged Cos she has money. 😂😂😂 you need to die on a cross and rise again with Christ this Easter for a chance to have sense.

Linda Ikeji is one great lady I admire. She has built a top media empire and also proved single ladies can be independent.

I'm happy she is engaged and soon getting married. She has now set the line for Don Jazzy and others.

Don't let this Linda Ikeji's story be the reason why you went back to an abusive relationship with your ex.

With the news just coming out about Linda Ikeji’s engagement, instead of blogs going out to investigate and write stories about them for their readers, all of them are just recycling “Linder Ikeji is engaged to her ex, Big Sam”. Nonsense lazy people.

Can we now agree that Ifemelu in Chimamanda's AMERICANAH is Linda Ikeji.