Social Media Roundup: How to lose your job at the White House 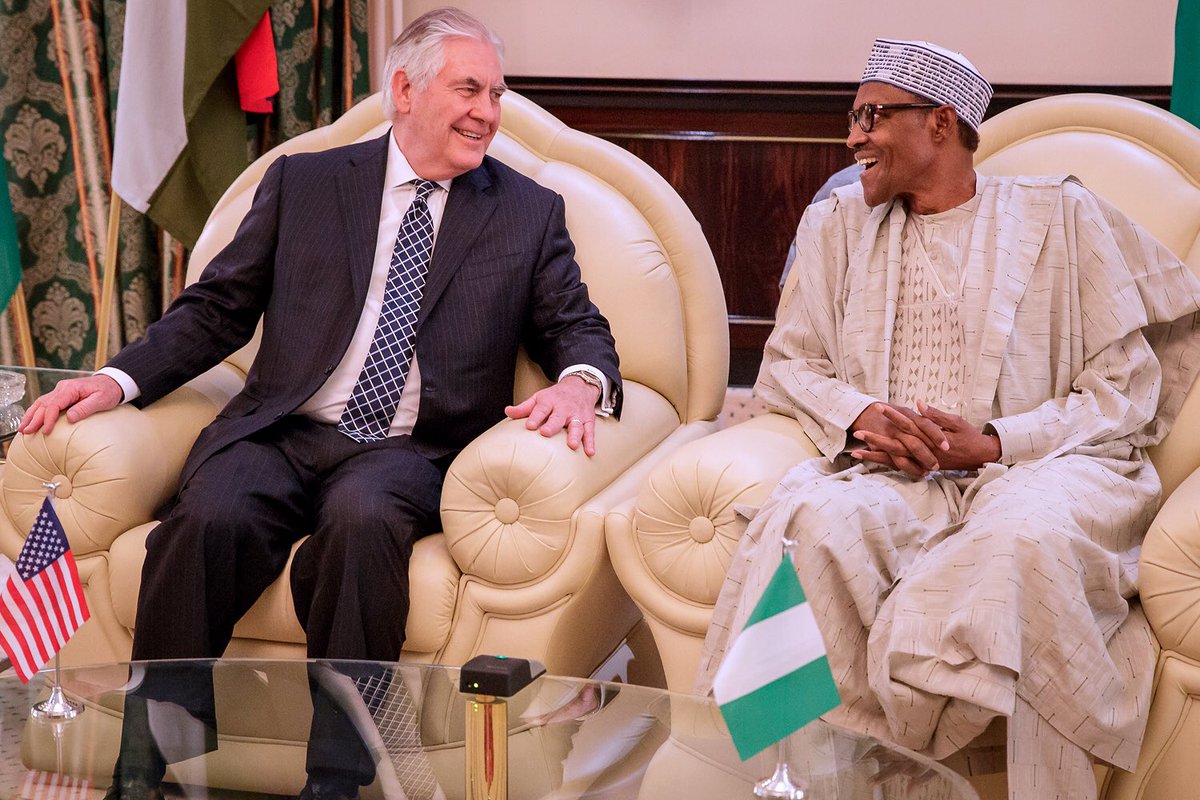 Rex Tillerson’s first diplomatic trip to Africa will be one he’ll never forget. The (former) U.S. Secretary of State’s 5-country tour of East and West Africa was some sort of an emotional rollercoster. After his trip to Ethiopia and Djibouti, he fell sick in Kenya. He then had to cut his trip short by one day. His last stop was Nigeria on Monday after his visit to Chad.

The next day after his African trip, Rex Tillerson was publicly dumped on Twitter by American President Donald Trump.

According to reports, prior to his visit to Nigeria, Rex criticised Russia and since President Trump is known to have a soft spot for Russia, the reports come as no surprise.

Coincidence? We think not.

Someone said that our unemployment rate in Nigeria is so high that US Secretary of State, Rex Tillerson visited Nigeria and was affected by it. Funny, but it has an element of truth!

Rex Tillerson's village people are wicked. He has been fired just after leaving Nigeria. He missed destiny by a day. We would have adopted him, given him a nameless Asiwaju or Otunba kinda political portfolio in Abuja, and worshipped him with zero expectations of accountability.

So Rex Tillerson Visited Nigeria Yesterday and He was sacked today. 😎 pic.twitter.com/rz2mJpLzO3

So Rex Tillerson is on official assignment in Nigeria & hears he was fired? You cannot even make this stuff up

US Secretary of state, Rex Tillerson SACKED! I hope our brother Rochas didn’t put up a Statue for the man when he came into nigeria?

The Donald is cold man. He just sacked Secretary of State Rex Tillerson in the midst of all the coverage and attention he is garnering from our mediocre media outlets in Nigeria.

A day after visiting Buhari, US Secretary of State, Rex Tillerson gets fired.

President Jacob Zuma visited Buhari and was forced to Resign.
Rex Tillerson American Sec of State visited Buhari while on transit home got fired.
Something is wrong? – @Hope For Nigeria

Read more reactions here. Read on for other interesting topics on social media this week.

Let’s talk about the ₦100 notes in circulation

This week, Nigerians on social media decided to discuss the menace that is ₦100 notes. If you’re in Nigeria, you already know the condition of the ₦100 notes in your possession. Some Nigerians are calling on the government to do something about it.

I must say this is not helping small scale businesses

Before and after they use one of these #100NairaNotes to swear for you. #DMPN pic.twitter.com/lixJHWwNH8

When you give the Okada man your brand new Naira note and he hands you wretched looking #100NairaNotes pic.twitter.com/mkv1pbLdO7

When u give Okada man that worn-out #100NairaNotes everyone has rejected and he accepts it. pic.twitter.com/XkPShlR6Du

Is it that they stopped printing #100NairaNotes so it can be easier when stealing money with Ghana must go bags? pic.twitter.com/46LtOpe5yD

From Nigeria to the world

He got a lot of love from his fellow Nigerian developers and members of the Nigerian tech community. Here’s a few of their reactions.

CONGRATS @codebeast on the release of your book. Huge win. ✊🏾

You've not seen anything yet. That my mentor is now an author 🙌🙌. He keeps mans on his toes mehn. pic.twitter.com/6SzfuZJ1ls

Y'all get in here. As you know. Tech is the new oil. So this our 'Otedola' of Tech has come out With a way by which you can own your own 'filling station' of tech!!!! Congrats @codebeast pic.twitter.com/1lSnuZ0ljY

My friend and brother, @codebeast is now a published author. This gladdens my heart. This has always been the dream. African engineers pushing the bounds of what's possible. Well done chief. pic.twitter.com/nadCkl6EYG

Me: Dollar or Naira I do not have, but what I do have I give. In the name of JavaScript, rise up & code 🔥🔥🔥 pic.twitter.com/fDguN64bsK

According to Mr Akinyemi Ashade, Lagos state’s Commissioner for Finance, “the government has also reduced the charges for Owner-occupier with third party including industries and manufacturing concerns by 25%, while tax credits has been given for LUC charges already paid in addition to introduction of instalment payment system”

People are still required to pay more than they used to.

Dear Lagos State Government, @followlasg
Your proposed Land Use Charge is an act of insensitivity, which is aimed @ increasing the burden of already impoverished lagosians.
Plz be informed that your recent reduction is unacceptable,because all we demand for is total cancellation pic.twitter.com/qYpndiWIqN

If you people allow yourselves to be fooled by this LASG reduction in that land use charge, then you deserve your govt. How can the govt make an arbitrary valuation and charge you based on that. Like that 580+ million valuation for a house in Omole

Now that the Lagos state has reduced the land use charge, where are the people that said the government didn’t increase it?
Lesson: Not everything should be defended, sometimes, silence is better.

Lagos state land use charge is not friendly. Please do something our governor with you good office. God bless this state.

Land use charge.. Landlord that collect 300000/ year is here fighting government for asking 20000…#I stand with Lagos state government