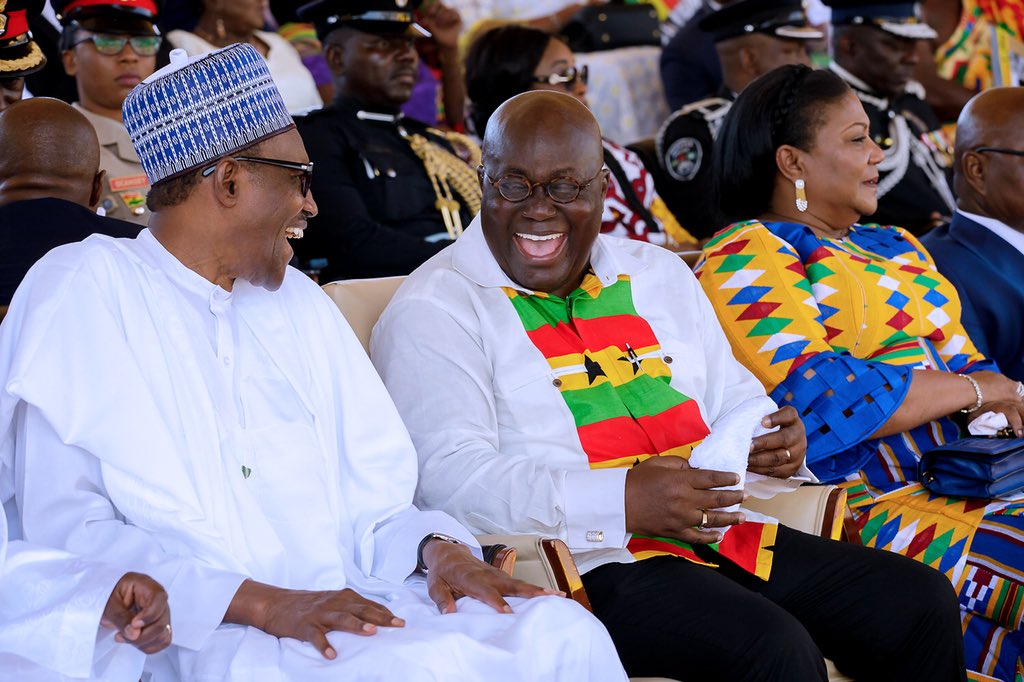 On March 6, Ghana celebrated her 61st year of independence and Nigerians put their jollof-related differences aside to wish their Ghanaian brothers and sisters a happy independence day celebration.

We are Africans.
We are a continent.
We are one.
Happy Independence Day Ghana! 🇬🇭

Jerry Rawlings once gathered all the top leaders of Ghana and shot them dead.

A Jerry Rawlings Solution might be the solution we need in Naija. These old folks are the ones scattering Nigeria. Ghana is doing far better than Nigeria ( — sentiment)

From your neighbor, Nigeria. pic.twitter.com/nr7kyaGKH0

President Muhammadu Buhari was a guest of honour at the Independence day ceremony and during his speech, he reportedly said: “I look forward to any form of collaboration between Nigeria and Ghana in tackling the menace of endemic corruption”.

However, this (misleading) television version/caption of his statement quickly went viral on social media.

You can already imagine how Ghanaians reacted. If you can’t, check this:

"@Austynzogs: Ghanaians ‘mock’ Buhari’s offer to help Ghana fight corruption.
Ghana’s social media space has reacted to the speech by Nigeria’s President Muhammadu Buhari that he will help Ghana in its fight against corruption. https://t.co/VHF9nibl9F pic.twitter.com/4SbKk0WcjM

"Nigeria will help Ghana fight corruption" President Muhammadu Buhari! What figure of speech is this?

So this Nigeria 🇳🇬 we live in now is fighting corruption in Ghana 🇬🇭
How did Buhari convince you people to vote for him.
Buhari, greatest con artist Nigeria has ever produced

The President of Nigeria, ranked 148/180 on the corruption perception index, is offering go help Ghana fight corruption. Ghana is ranked 81/180 on the same index.

An overrated sense of self importance is a horrible thing

So President Buhari went to Ghana to say he will help them fight corruption? Such level of delusion!

A friend of mine who was at the event and who’s the Youth Leader of the ruling party in 🇬🇭 said they were all laughing at him when he said it.

I can't even laugh in English. Sorry my Ghanaian people, this one pass me!#GhanaIndependence#GhanaAt61 pic.twitter.com/YOFZs9KznM

Here's what he said. Spot the irony. pic.twitter.com/7jWzWTsUfx

In case you missed it, read President Buhari’s full speech here. Read on for other trending topics on social media this week.

International day of the woman

Yesterday, March 8, the day set aside as the International Women’s Day, the whole world gathered to celebrate women making great strides and to discuss how the world can become more gender inclusive. Using the hashtags #IWD2018 and #InternationalWomensDay, many individuals and brands took to social media to celebrate women around the world.

Happy International Women's Day! We're celebrating the women who have changed the world.

Here's all of the amazing women who have received the #NobelPrize and their remarkable achievements at the time of the award. #IWD2018 pic.twitter.com/isKJHSGjsj

Happy International #WomensDay! #TimeIsNow to support each other, believe in each other & encourage each other to speak up for rights & gender equality! https://t.co/Non0GlY9S5 #IWD2018 pic.twitter.com/kJJ0zBF1Oy

We owe our history to generations of fearless women, unafraid to challenge the status quo and demand better from their country. #IWD2018

Here's to all the amazing women who are contributing to the #digitalmarketing society with their talent, skills and timeless wisdom. We celebrate you today and everyday! #IWD2018#InternationalWomensDay pic.twitter.com/5bOGhLDiPc

To the women in #Nigeria’s northeast, who defy Boko Haram abductions, and insist their children must go to school, Happy International Women's Day #IWD2018. You are the true Heroines! pic.twitter.com/7YxK24aEkD

Our women have contributed immensely to the growth and development of Nigeria since Independence and therefore deserve to be given every support to achieve more. #IWD2018 #WomensDay #InternationalWomensDay

Nigeria has Africa's lowest representation of women in Parliament (5.6%).
How can there be equal representation when half our society is underrepresented?
This has to be reversed. #WomensDay#IWD2018 #PressforProgress

"Women are the real architects of society" — Cher

Happy International Women's Day to all the women working to make the world a better place. You rock!! #IWD2018 #InternationalWomansDay pic.twitter.com/0UW1xKJXoa

Celebrating our women! Meet some of the Ladies on our team. #IWD2018 #PressforProgress #HumansofBudgIT pic.twitter.com/SHBeDugByg

To commemorate the day of the woman, I wrote a story about why there is a low participation of women in tech and how we can fix it. Read it here.

The JAMB snake has a name

Last month, we heard of the snake that swallowed ₦36 million in the Markurdi office of the Joint Admission and Matriculation Board (JAMB) as told by Philomina Chieshe. This week, following interrogations by officials of the Economic and Financial Crimes Commission (EFCC), Philomina revealed the identity of the snake, the coordinator of the JAMB Makurdi office, Samuel Umoru.

Here are a few reactions on social media

So the JAMB N36m was collected by her superior and wasn’t swallowed by a snake. Or rather, the name of the snake that swallowed the money is Mr Umoru, her Oga. https://t.co/vP0nL63dyy

FLASH: Philomina Chieshe, the JAMB official who claimed that the board’s N36 million was swallowed by a snake, has made a U-turn …. she confessed that the money was collected by one Samuel Umoru, her superior that he used for himself

“Philomina Chieshe, the official of the Joint Admission & Matriculation Board(JAMB),who claimed that the board’s N36 million was swallowed by a snake, has made a U-turn…when she appeared before EFCC she confessed that the money was collected by one Samuel Umoru, her superior.” https://t.co/Pu77TAaji4

Samuel Umoru is the snake eating money at JAMB.

According to reports, Samuel Umoru did not deny the allegations and has been released on administrative bail.

This week, the Lagos state government signed the new Land Use Charge law earlier passed by the House of Assembly. The law, which is a repeal of the 2001 Land Use Charge law, reviews the charges on commercial properties in the state and grants exemptions to senior citizens/ pensioners, owner occupiers, NGOs, churches and Mosques. For a better understanding, read this.

Lagos state just raised Land Use Charge by 500%, I hear. Kuku kill us, because it’s a crime to live in Lagos.

Who 'll rescue us from the hands of this wicked Lagos state govt?

The LASG is targeting a N750 billion revenue in 2018,therefore one of the ways is to increase the land use charge by over 300%!

If someone owns a property in Surulere worth N50m, they need to pay Lagos State N38k annually in land use charge so long they live there. If they have tenants, however, their land use charge is N380k. Expect your rent to go up.

Ambode is creating alot of new problems in Lagos.

Watch landlords increase rent in Lagos just because of this his 400% increase on Land Use Charge.

Bear in mind Lagos hasn't ensured landlords charge only one year rent as the law specifies.

Land use charge goes up means rent will go up

Pls why are we docile in lagos? Even if we are Pro APC here lets call out what is wrong

The Land Use Charge is for Landlords, but we know that it is the tenants that pay it either directly or indirectly through rent increases. When the Lagos State Govt decided to increase that charge, surely it must know that the tenants will bare the cost in increased rents. No?

Tenants in Lagos, how’s the increase in Land Use charge coming along ?

Ambode has:
1) Driven thousands of Otodo Gbame residents off their homes (in contravention of a court order) to create room for a luxury estate;
2) Raised toll gate fares at Lekki and Ikoyi;
3) Raised Land Use Charge by over 600%;
4) Refused to account for the use of 2 & 3 above;

Your MCM got the State Legislature to pass Land Use Charge Law which raises the charge arbitrarily & appoints a private company owned by your other MCM as collection agent.

Your MCM now says he is ready to dialogue on the law. Your MCM is Ambode and he needs to go in 2019.

With this new Lagos Land Use Charge (LUC), definitely Mr Ambode will surely NOT have my vote in 2019

It seems Lagos State APC is already killing her citizens with stupid and I repeat stupid different taxes.

I'm on the road,
I'm paying road taxes and yet the roads are bad

They came for Maroko, undisturbed.
For Otodo Gbame, wetin concern me.

They've come for all of us…

All these Land Use Charge, Toll increase and VAIDS are means to generate enough for the 2019 elections.

Ambode has a target of N50bn at least.

Lagos residents are not serious. Let them pay the land use charge joor. We need money to remove Oyegun as the APC chairman. Who will fund it.
This was the case Jimi Agbaje made. Elect another person so somebody else can go through the finance of the state. They refused.

Funniest thing is that the people being paid to tweet in support of the Land Use Charge don’t own property, but see the energy they’re using to argue with property owners who actually have seen their new bills.

Non Lagosians are complaining about land use charge…

You all should go back to your state and attack your incompetent governors.
Your governors don’t even stay in their states, They rule from ABUJA..

Apparently, Alpha Beta, a private company reportedly owned by Bola Tinubu was specifically mentioned as a possible consultant to be engaged in the verification of land use payments to the Lagos state government. This even raised more suspicions.

They increased land use charge to add some private company into law that will be collecting the money. LOL. Lagos. State. https://t.co/ILxbvI4J5f

The Lagos state House of Assembly later released a statement claiming that the insertion of Alpha Beta as a consultant in the land use law was a mistake.

Don’t get it twisted

LASG has clarified the figures circulating in the media on the rate for the newly reviewed Land Use Charge Law of 2018, saying many of the numbers were based on several years of arrears on the levy not paid by affected property owners.

My take on Land Use Charge – https://t.co/HnKo4Obzmu

Don't be misinformed about the Land Use Charge, get your facts right https://t.co/8JoypAHUxL

Stakeholders are currently demanding for a reversal of the new law.