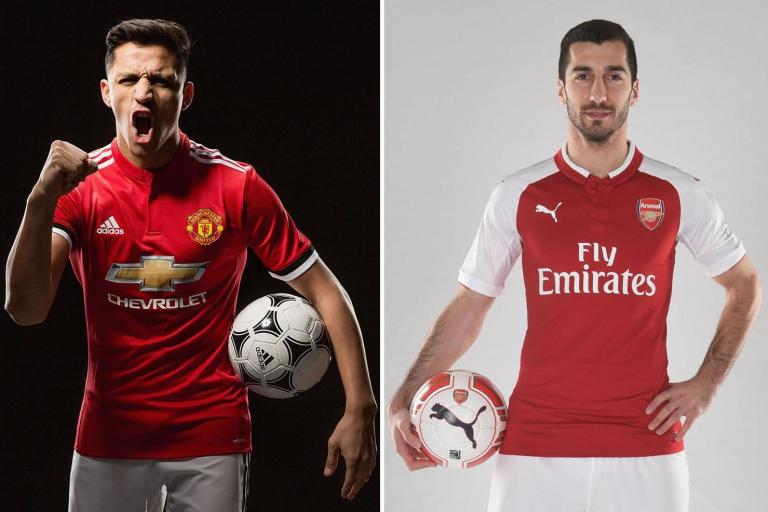 You don’t have to be a football fan to have been aware of the deal between Manchester United Football Club (ManU) and Arsenal Football Club that was finalised this week.

The deal saw Alexis Sanchez move from Arsenal FC to ManU in exchange for ManU’s former midfielder, Henrikh Mkhitaryan. Here’s how both teams announced their new signings on social media.

The deal had football fans around the world talking

Mkhitaryan has agreed a move to Arsenal, with Sanchez set to go in the opposite direction. It's a straight swap with no money involved. [BBC] #MUFC

Manchester United fans around the world trying to convince Mkhitaryan to join Arsenal so we can have Alexis Sanchez in peace. pic.twitter.com/BOKCqpHUiV

Arsenal got a great deal by not losing Sanchez for free.

But to suggest that Sanchez and Mkhitaryan are of the same quality or even close is nonsense. Not in the same Premier League we've all been watching.

Excited about getting to watch Mkhitaryan in an Arsenal shirt, was so disappointed when he went to United two years ago. Cracking player, should fit in very well. Sanchez has been great, wish it had turned out different. But we move on.

This Alexis Sánchez and Mkhitaryan deal, In my opinion this is the best deal Arsenal have done in the last 2 years.
This guy scored 23 goals and made 32 assists in his last season at Dortmund. His style of football just didn't suite with Mourinho's.

Sanchez is a great player but I never loved him like I loved Bergkamp, Henry, Wright, Pires, Ljungberg, Vieira, Adams, Seaman, Dixon, Keown, Parlour, Brady and Charlie George.
I even loved Anelka more than Sanchez.
So his departure pisses me off, but it doesn't break my heart.

❤ Arsenal, 2018: "It's a dream come true because I've always dreamed of playing for Arsenal."

All these footballers sef, their new club is always their dream club 😂😂😂 #Alexis7 #MUFC pic.twitter.com/3OQNdZqP0t

Sanchez played a brilliant piece of 'Glory Glory Man United' on the piano! 🎹

For some reason, gist that Alexis Sanchez’s move was influenced by former Arsenal player, Thierry Henry was circulating.

Alexis Sanchez said Thierry Henry advised him to leave Arsenal for his own good you know pic.twitter.com/mwcHqmBEBY

Both players took to social media to address the issue.

I want to clarify that Henry never told me to leave the club, it was a personal decision … he LOVES the club and someday it would be nice to see him as the arsenal coach because he loves the club …

In case you didn’t know:

Manchester United now have Alexis Sanchez—here's how to get the best out of him and beat your mates at FIFA 18! 🙌 🎮 pic.twitter.com/yVeddNY5Gx

Read on for more interesting topics on social media this week.

This week, former president Olusegun Obasanjo wrote an open letter to President Muhammadu Buhari. If you missed it, read it here.  In the letter, he accused President Buhari of Nepotism and advised him to halt his 2019 ambitions among other things.

The letter couldn’t have come at a better time as Nigerians have been complaining of the incompetences of the present administration. Here’s how they reacted to the letter.

Let me react to Obasanjo's open letter to President Buhari:

First & foremost, until Obasanjo apologise to Nigerians for his contribution to the emergence of this unfortunate government he is not worthy to condemn Buhari, He has also lost Political respect, he should shut up!

If you think Obasanjo's letter is all about national interest & not selfish interest…………….then you need your head examined.

We have no reason to believe that ex-President Obasanjo has any motive beyond the well-being of the nation in issuing his Statement. We have also taken his admonition in good faith and we thank him most sincerely for taking time off his busy schedule to pen such a long statement. pic.twitter.com/OgnyJ1AAy2

What’s a trending topic without jokes?

Lai Mohammed should not get carried away with praises of his response to Obasanjo. If he has been doing the job of projecting the achievements of the present govt as he should, we won't be here.

Presidency says Obasanjo has been too busy to notice reality.

No worries, Reality will also dawn on Buhari in 2019.

In other news, Obasanjo's PhD has clearly sharpened his clarity and brevity. His letter to Jonathan was 18 pages. This one was 13.

I read both. This one made better use of the English language.

In my view, President Muhammadu Buhari @MBuhari still has the opportunity to redeem his image. That's why he has to look at Obasanjo's letter critically and act fast.

I agree with Obasanjo's letter even though he didn't say anything that I have not said about Buhari and his govt before. However,  Obasanjo and Buhari are like accuser & the accused, two of them are analogue and they do not represent the Nigeria of today.

He does not like being in a haste to react to issues but it took them barely 24hrs to respond to Obasanjo's open letter. If only they responded with this same speed on:
Herdsmen
Babachir Lawal
Benue killings
Taraba killings
Fuel scarcity
Maina's recall.

God has given President Muhammadu Buhari popularity that money cannot buy. He should for the sake of his integrity and the love people have for him, look at Obasanjo's letter and address major issues raised therein.

Buhari has failed and should go and rest but PDP that is now controlled by Wike is not an option.

He says a 3rd option is the only way out and Nigerians must arise to take charge of the country.

Pepper spray to the rescue

Yesterday, a lady took to SnapChat to recount her experience with a Taxify driver. According to her story, he tried to rape her but her pepper spray came in handy.

Here’s The Full Video Of Miss Dorcas Fapson Narrating Her Ordeal With The Taxify Driver Who Assaulted Her. pic.twitter.com/FSJQ3onCYX

The Taxify driver recounted his own side of the story

My last question is, when she was shouting and running with her Snapchat, who was running after her?

The pepper sprayed taxify driver that couldn't even see a thing?

This neither looks like a kidnap or rape story. I believe her about the card vs cash thing. She also made clear that the guy ended trip afterwards.

Seems to me like it was a bit entitled for her to assume the right to stay in his car afterwards as her other taxify was close.

While others supported her actions

Like I’m actually so upset about this DSF case. How on earth did anybody even believe that dumb story the guy supposedly typed as his account of what happened??

This is why a lot of victims of violence and rape never speak up – Nigerians are fucking stupid!!! I’m just happy she was smart enough to keep the camera rolling, if not, it would have been her word against his with the number of nitwits out there!

You people need to learn to stop trying to blame the victim. First, why was she recording. Second, why did she have a pepper spray on her. Next, why did she announce before spraying.

When are we going to ask Why the hell was he trying to lock her in his car?

All i'm saying is if a taxi driver should drive me to his yard or to anywhere i do not agree with and i have pepper spray, i will destroy your fucking eye balls. I am not going out like that. fuck that

I believe that Uber and Taxify need to install dash cam’s in their drivers cars. A lot of mayhem can be avoided with that implementation.

Demand for pepper spray on the rise

I sell pepper spray RT my customer might be on your TL 🙂 pic.twitter.com/hxmCgjzIob

Every girl/woman in Nigeria should have pepper spray in her handbag/schoolbag. These molesters/rapists are always on the prowl. Women need to start protecting themselves.

I'm getting my pepper spray tomorrow. Any man who touches me inappropriately or even tries to kiss me when I didn't give you go ahead, you are getting it in your eyes. If you don't know how to keep your hands to yourself I'll teach you. Don't fucking try me

Please where can I buy pepper spray in Lagos?

Remember the story of the lady that proposed to her boyfriend last week at the Ikeja City Mall (ICM)? Well, her experience didn’t deter another lady from proposing to her boyfriend at the Ozone Cinemas, E-Centre this week. Sadly, it turned out just as badly, watch the video below.

So apparently, Another Lady proposed to her boyfriend today at Ozone and guess what ! The boyfriend poured popcorn on her 🤣🤣🤣🤣🤣🤣pic.twitter.com/dPm2FflzGJ

Lol another being proposed to a man at ozone today.
Idiocy competition pic.twitter.com/K7LEQI8S3M

Here are a few reactions:

If you propose to someone at Ozone then you really have no one else to blame but yourself. The height of disrespect tbh. Shows you don’t rate your partner.

Lmao of all places for someone to propose, it’s now Ozone, O fucking Zone !

I hate all those public and loud places proposal. You can propose in a nice and decent place. Wassup with ICM and Ozone ?

I'm shuddered
-Like why would you propose in ozone ?
-why are you holding him back,is it by force ?
If it was the other way round now nobody would be asking why he was angry, but let's pretend as if he was wrong being angry.

Its Kaiyra o.
U saw her Yesterday in the house.
It was a prank by Pulse TV guys and her. If u zoom you'll see Rita in the video. She was the one dragging the guy back

So the same girl that proposed to a guy at ICM and got rejected went to ozone to propose to the same man again… Lool.. I think both they are doing it for attention

This Last video of a babe proposing to a guy is such a sham. Did she propose twice? Same day? Same clothes? At Ozone and Beerhugz? Exact same reaction? Kmt.

What’s your take on this new trend? Let me know in the comments section.

EXTRA: Special Adviser to Governor Akinwunmi Ambode on Commerce and former Chairman of Lagos State Sports Commission, Deji Tinubu died yesterday. It was gathered that he slumped during a novelty march in Epe, Lagos and died afterwards. The news of Deji’s death has been trending on social media, read the reactions here.