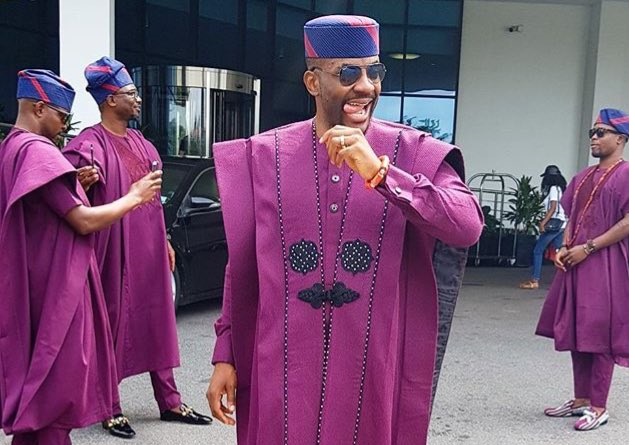 This week started with the buzz of the traditional marriage of Banky W and Adesua Etomi; #BAAD2017. Although the day was all about Banky and Adesua, someone else stole the show. Popular TV host, Ebuka showed up in an agbada that had everyone talking, especially on social media.

Ebuka whoever your tailor is , you must never cheat on him !

Your agbada be like it fell from heaven 🙆🏾‍♂️🙆🏾‍♂️ #BAAD2017 pic.twitter.com/UJnEeHdxDr

I can only imagine how Ebuka felt after wearing that agbada…I bet he stepped out feeling like he was about to go save the world. #BAAD2017 pic.twitter.com/tiNxWHV79L

Nigerians were quick to pit Ebuka’s agbada against Masterkraft’s outfit.

WEDDING OF THE YEAR.
I think Banky W and Adesuwa deserves a statue. #BAAD2017 pic.twitter.com/9tl9TTPjjK

Incase you were wondering; Yes, there’s a tech angle

We are super excited to announce the launch of “Agbada X”.

This is the most advanced Agbada yet! It combines the flourish of the traditional flowing Agbada with the practicality of the possibility that “Man’s too hot”.

The top loading design was changed to “suit style”. pic.twitter.com/ZEZIQmZaq3

While we are still trying to get over Ebuka’s famous agbada, check out some other interesting topics on social media this week.

This week Nigerian musician, Burnaboy was declared wanted by the police over his alleged involvement in the robbery and battery of Mr 2kay last month.

Wait o!
What's happening?
Burna Boy paid guys to Rob and beat up Mr. 2Kay????
This is not good! pic.twitter.com/mjaPl5lwrB

Dear Nigerian police,
I know this is serious case but while we find Burna Boy, can you pay this man his allowance? pic.twitter.com/c5hgB6HnqM

I will never believe Nigeria police until Burna boy is proven guilty in the court of law.

This same Lagos state Commissioner of police try to spoil the image of @iam_Davido over Tagbo's death.

What’s a serious matter without a light side?

How can you say Burna Boy and Masterkraft's tailor are the most wanted villains in Lagos right now. pic.twitter.com/JJoKn697yQ

When Burna Boy mistakenly turns on his location. pic.twitter.com/DJVAL50pQH

Burnaboy released a statement but is still reportedly on the run. For more gist, read this.

On Tuesday, at the home of Epkenyong Ita, former Director-General of the Department of State Services (DSS), men of the DSS were seen preventing operatives of the Economic and Financial Crimes Commission (EFCC) from arresting him.

@MBuhari @NGRPresident @ProfOsinbajo good evening sir. I really don't know how you will continue letting your aides/delegates etc continue embarrassing you and your office. The fracas BTW EFCC and DSS is so embarrassing and annoying.PLS PUT YOUR HOUSE IN ORDER!!!

So buhari approved this show of shame btwn EFCC and DSS? Nothing like education. Illiterate president.

It is only in Nigeria that the Police has no power over the military. A US Navy man tells me a traffic police can arrest any military man for a traffic offense. So why can't EFCC arrest the former DSS boss? Nobody is above the law. Did they not arrest Dansuki?

I laugh in corruption… How can DSS officers stop EFCC and NPF from arresting a former DG(oke & co)…despite showing arrest warrant, some people have power than the government… Stole money and can't be arrest cus they got full protection from a government institution

This is not "institutions building" sir

Jisox! 😭what kind of impunity & embarrassment is this?

Is Nigeria under Buhari still a country or a Zoo?

The Nigerian senate is reportedly investigating the clash.

This week, Odunlade Adekola, famous Nollywood actor and the face of Nigerian Twitter memes graduated from the University of Lagos.

This video makes me so happy. In spite of his success as an actor and his age, Odunlade went back to school to get a Bsc 💪🏾💪🏾💪🏾 pic.twitter.com/C6gdVPTNVJ

& launched a new meme instantly! It's in him 😂😂

RT if his memes ever made you laugh. pic.twitter.com/AsLC8NLTHe

His fans celebrated with his famous memes

"so, are you also signing out from the school today?"

Odunlade will be like
"no, I'm just signing in, I want to go and submit my jamb result" pic.twitter.com/lyI04xtqhL

Odunlade graduated from the University’s department of business administration.

Today, Atiku Abubakar, former Vice President of Nigeria issued a statement announcing his defection from the All Progressive Congress (APC) to the People’s Democratic Party (PDP). Read the statement below.

Here are few reactions to the news on social media

Congrats to @atiku for dumping the plague called APC and coming back home to the PDP family.

It took courage to take that bold step and I commend him for it.

I congratulate @Atiku for leaving the APC. It took courage especially as he has wide business investments that are already targets and could be further targeted. I, Senator Ben Murray-Bruce, now appeal to Waziri Adamawa, to return to the house he helped build, the PDP.

I congratulate H.E Alhaji Atiku Abubakar on his decision to quit APC and I look forward to welcome him to the @OfficialPDPNig, a party he co-formed and a party whose platform he served as Vice President of our great country. pic.twitter.com/M4NzHoSUYz

Some Nigerians were not impressed

@atiku leaving @APCNigeria to contest on the platform of @OfficialPDPNig is a dead on arrival strategy. @atiku is unstable, lacks discipline and can't be Nigeria president. @Ayourb tell the world.

Because the internet forgets

Atiku Abubakar’s three-year loan deal to APC with an option of permanent transfer has officially come to an end, after PDP activated the buy-back clause in his contract.

It's going to be a very busy transfer window.
Obanikoro has moved for a record breaking fee
Atiku is returning to his boyhood club. https://t.co/g6M4ig2cPZ

Atiku should do a pogba haircut for the culture.. #Atiback

When EFCC hears Atiku has resigned from APC pic.twitter.com/GlDrFBWk1B

On a more serious note

Atiku to PDP, Obanikoro to APC. But your favourite analysts are still swearing by political parties.

Abeg, don't let anyone deceive you with 'choose a side' rhetoric in 2019. The only real demarcation is between ordinary Nigerians and the political class.