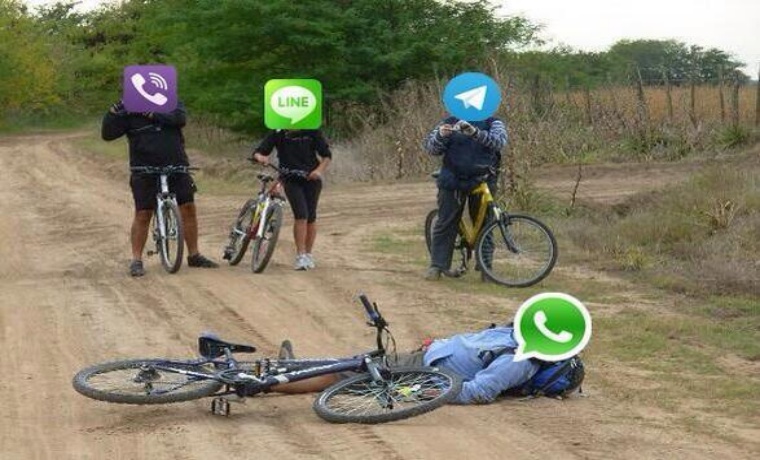 Today, WhatsApp stopped working in several countries around the world for about an hour. Users of the instant messaging app could neither send nor receive messages. For some, it felt like a mini-natural disaster and they took to social media to react.

Whatsapp is down folks. This is not a drill. #whatsappdown pic.twitter.com/ObazSKGqHf

Whatsapp is down. A billion people look up from their phones for the first time in 7 years. Everything seems so modern.

500 people in India have already died because Whatsapp is down and they couldn't forward a chain message to 10 people. #WhatsappDown

WhatsApp is down😱
How would African parents survive without spreading fake news BCs?😂😂😂😂#WhatsappDown

Here are some more interesting topics on social media this week.

A true son of the soil

Anthony Joshua should be an example young Nigerians should follow, when it comes to patriotism. He is always proud to be a Nigerian.

Some Nigerians spend one month abroad, and start insulting Nigerians and denying Nigeria.

Anthony Joshua embraces Nigeria openly and passionately. Nigerians are only reciprocating. It is completely understandable https://t.co/gFKYbRIjXA

Chai. After we desperately struggled that year to famz Chiwetel Ejiofor, look at Jidenna and Anthony Joshua repping Nigeria so proudly.

The Nigerian government was represented at the boxing match

If I were Anthony Joshua,I ll proudly call myself British 😂😂😂 Nigeria cannot reap where she did not show 😂😂😂

Nigeria and famzi things… We dey claim Anthony Joshua by fire by force. This our country ehn…

Shading people that grew up in Ogun State

If Anthony Joshua was born in Nigeria and never had the opportunity to leave Ogun State what do you think he would be doing now?

Check out what British footballer, Joey Barton had to say about Anthony Joshua’s entrance song here, and how Nigerians reacted here.

A New episode of drama in the Nigerian government

This week, President Buhari sacked Babachir Lawal and Ayodele Oke over corruption allegations. Babachir was the Secretary to the Government of the Federation while Ayodele Oke was director general of Nigeria’s National Intelligence Agency. Here are a few reactions on social media:

We are not impressed

Pres. Buhari Sacks Babachir Lawal & Ayo Oke. Since we had to cry & cry & cry before you do the right thing, we've no energy left to clap. pic.twitter.com/Eg6riCSgvM

No need to even clap… Abba Kyari Is still Chief of Staff!

Has the FG handed over Babachir Lawal's case file to the EFCC for more work & prosecution? They need to clarify this. That sack isn't ENOUGH

Same treatment given to the likes of Metuh, Obanikoro, Omisore, Dokpesi etc MUST, yes, MUST be given to Babachir Lawal. He can't walk free.

Now that Babachir Lawal has been sacked, President Buhari must do the needful. The former SGF must be arrested and prosecuted by EFCC

The Era of sacking and go home must stop. We must still prevail on @MBuhari to ensure the prosecution of Babachir Lawal. The time is NOW.

Buhari just had to pick someone from same LGA as Babachir lawal and known social/political ties as his replacement. Buhari is a real crook

Babachir Lawal the former SGF is the God Father of Boss Mustapha the newly Appointed SGF, Buhari is Playing with Nigerians🇳🇬

Buhari just had to pick someone from same LGA as Babachir lawal and known social/political ties as his replacement. Buhari is a real crook

The intention of the termination of Babachir Lawal's appointment is to distract Nigerians from Maina's reinstatement and escape scandal.

See you next week for another episode of Drama in the Nigerian Government.

The Handler is back!

This week, Olufemi Adeyemi popularly known as F.Shaw — Nigerian rapper and former handler of EFCC’s Twitter account — announced his comeback as The Handler, but this time with Union Bank.

Ladies and gentlemen, I am pleased to announce that I am joining #TeamUnion @UNIONBANK_NG. pic.twitter.com/J1MEyW3MqX

So much love for The Handler

He went straight to work

Hello Oludare, we appreciate your feedback. Please DM your account number and a screenshot of the error message to enable us review

Hello Chukwuma, welcome back. Please check your DM for info on how to reactivate your account. #SimplerSmarterBank

Union bank even got some new customers

I just followed the @UNIONBANK_NG handle. May be an account with them is not a bad idea.

Don't let me be left out…. how do I go about acct opening?

yep that is it. I'm opening a union bank a/c

Union Bank is about to be lit on social media!

A few days ago, Aniedi Udo-Ubong, Product Manager at Google expressed his displeasure at Paylater — an online lending platform — on Twitter. Apparently, Aniedi requested for a  ₦500,000 loan and got ₦20,000 instead after providing tons of personal information.

Me:
Can you offer me a quick loan of N500,000?@paylaterNG:
Calculating your loan offer…

Congratulations! We have a loan offer for you pic.twitter.com/FyC3iu68Wz

Their marketing message & media hype is totally different. AI, ML and all the buzzwords in the industry. Basically, I fell for the hype!!! pic.twitter.com/6r0X275gc1

Others shared their experience

Thats even if they lend you. @paylaterNG really sux.

I think you'd need to build some sort of credit history to get the amount you are seeking.

Aniedi, I believe you're looking at it from the eye of the disappointment

Objectively they need the data to determine..

…short notice from all the payday lenders. Say for instance if Dangote is looking for a loan

Na the kind report our tech blogs suppose do

For more gist, read this thread and this too. Have you ever borrowed money using Paylater? Kindly share your experience in the comments section.