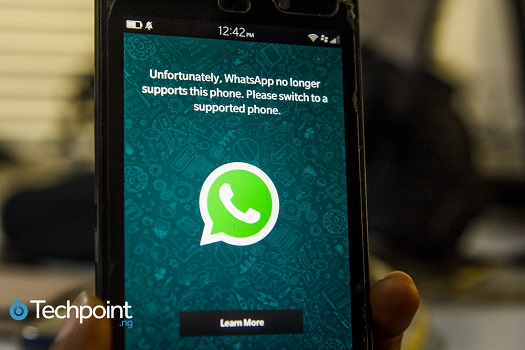 UPDATE:  WhatsApp has not totally stopped support, extension till December 31st. The headline and part of the original article below has been edited to reflect that.

On the 19th of July 2017, after faithfully sticking with BlackBerry for 4 years, Titilola realises that WhatsApp messages are not delivering on her BlackBerry  Z10 smartphone. Just like Titilola, other users are discovering WhatsApp has may have finally delisted the smartphone maker as one of its supported platforms.

In February last year, WhatsApp made an official announcement via its blog that it was ending support for BlackBerry and other listed mobile platforms by the end of June 2017. In January, there was a brief scare period when user could not access WhatsApp 6 months earlier than the original date, this later appeared to be a technical glitch.

Yesterday, WhatsApp finally stopped working on many smartphones running the BlackBerry smartphones after a 19-day grace period from the original timeline. Users got error messages when attempting to send messages on the instant messaging platform.

However, according to an update on the original blog post, support on smartphones running the BlackBerry OS has been extended till the 31st of December 2017. If your WhatsApp is displaying error messages, take the following steps;

If you own a BlackBerry smartphone please confirm in the comment section if WhatsApp still works on it. If not, did this update fix it?

I have only one thing left to say

The misleading title of this article notwithstanding, WhatsApp works perfectly well on the NUMEROUS Android-based Blackberry-branded handsets. Furthermore, Blackberry is well placed to CONTINUE dominating the in-car software market, their QNX OS is still considered one of the best-in-class RTOS’s in the world, and, as they continue to de-emphasise telephone handsets (they no-longer make any, they just license their brand and IP to others to do so under their name) and continue the shift towards being a predominantly software-oriented company, there’s little sign that they’re in financial danger any longer. Your misperceptions notwithstanding…

Not that I would ever use this app, BlackBerry doesn’t have to worry about this stuff anymore. They only produce/ licence Android Secured BlackBerry’s now. Loving the new BlackBerry KEYone! Best of all world’s.

Thanks so much to all of you. WhatsApp had stopped working someone time in the last couple of days on my BB 10 Classic. I updated and now it seems to work well again. This saves my communications with my international students.

This is misleading. I deleted whatsapp now it’s irreversible. Don’t try thi nonsense as you won’t b able to recover it.