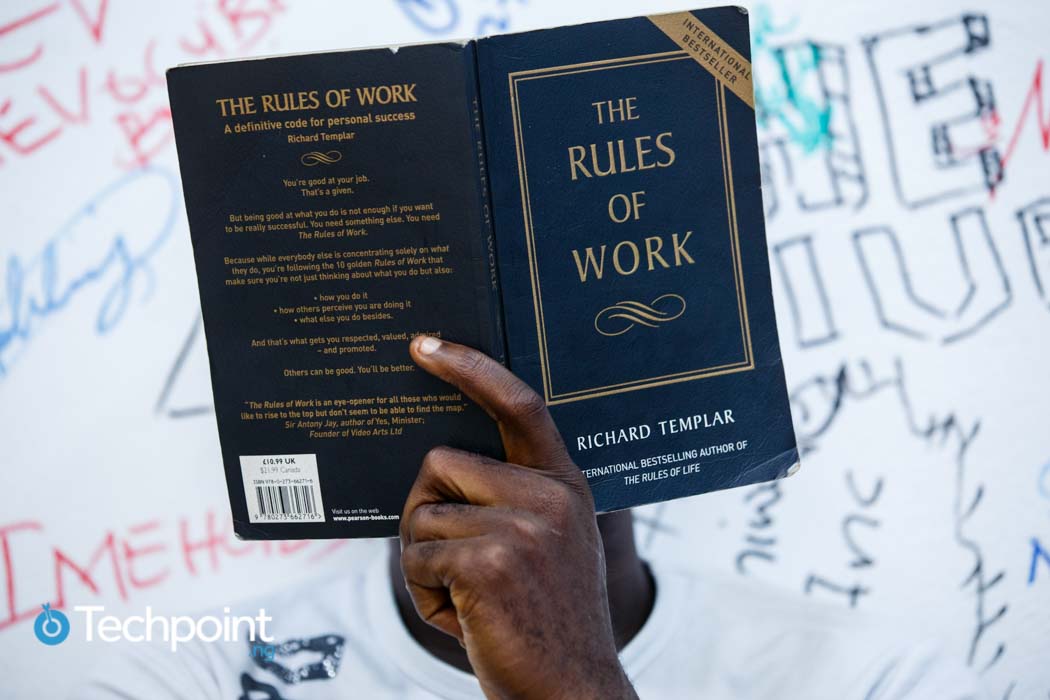 Most of us want to do our jobs well, earn bigger salaries, achieve greater security, get higher status and a bright future. Setting the wheels in motion, we work so hard at our jobs to get well rewarded, respected and promoted. But a lot of times, these sequence of activity do not guarantee success or even yield the desired result.

Of course, there really is no future for the bungler or the sociopath, but Richard Templar aptly puts his finger on the flaw in the implied logic that concludes that “the better we do our job, the faster we will rise up to the organisation.”

Being good at work isn’t enough if one really wants to be successful. According to him, you need something else. In his book, titled; The Rules of Work, he points out the golden rules that makes one ultimately become a “rule player”.

The Rules of Work is first and foremost a guide for the individual manager, an eye-opener for all those who would like to rise to the top but don’t seem to be able to find the map. Secondly, it is also a book for the organisation itself: especially because there is the inherent danger of becoming preoccupied with the internal tasks, systems and procedure and invariably losing touch with the world outside. And the easiest way for this to happen is if everybody is concentrating on being efficient rather than being effective — in other words if they don’t follow the rules.

He opined that, as active members of an organisation, we are all doing two jobs but are mostly conscious of one of them — the job in hand: meeting KPIs, reducing machine downtimes, speeding up monthly management account etc.

The other job is both larger and vaguer, which is making the organisation work. This involves looking at the world outside the organisation; what it needs, and how its needs are changing, and what the organisation must do (and stop doing) to survive and prosper. This particularly is where the rule players are identified.

For instance, if people think you have it in you to solve the problem of the organisation itself, you may have broken away from the pack. But how you do that is something the book explicitly sheds light on.

Where the Rule Player fits in

As someone who had understudied the rules highlighted in the book, over a long period of time, Richard had trained quite a number of managers and watched them go out into the world to conquer their destiny with charm and courtesy, confidence and authority.

He remembers interviewing two chief executives of well-established corporations, who had both joined from college with hundreds of other bright ambitious graduates. So curious to find out why it was they who had to go to the top of the heap and not others, he proceeded to ask their secret recipe.

One said he didn’t know, but that every job he’d ever done was abolished after he left it. The other didn’t know either but said that no job he’d ever done even existed until he started doing it. According to him, both of them were striking examples of how people focused on doing the right job and, most importantly, followed all the Rules of Work.

Some people go to work each day with only one thought process — getting through to going home time. Getting the job it seems is enough for them that they will just do it and remain static. But doing the job isn’t the end game for a rule player, it is merely a means to an end. They live by a code — which is to work a whole lot harder than any of their colleagues.

Apparently, being a “rule player” requires staying very focused, keeping in mind the task at hand, as well as, consciously thinking about every facet of that work and make changes to improve them.

It is very easy to assume that, when one is playing by the rules highlighted in the book, they are probably cheating. Richard clarifies that “By following and keeping to these rules, you aren’t exactly doing anything wrong, merely utilising one’s natural skills and talent and adapting them.

So, if you are that type of person that is having confidence issue at your place of work or unsure about how best to validate your thought process and approach to work, then the Rules of Work would come in really handy.

There is a vast amount of gossip, politics, gamesmanship, time wasting and socialising that goes in the name of work — “it isn’t work”, the book makes us understand.

Instead, keep your eyes on the ball and you’ll be already playing with a vast advantage over your colleagues.