Stay productive: How to get the right work done in good time #TWBR 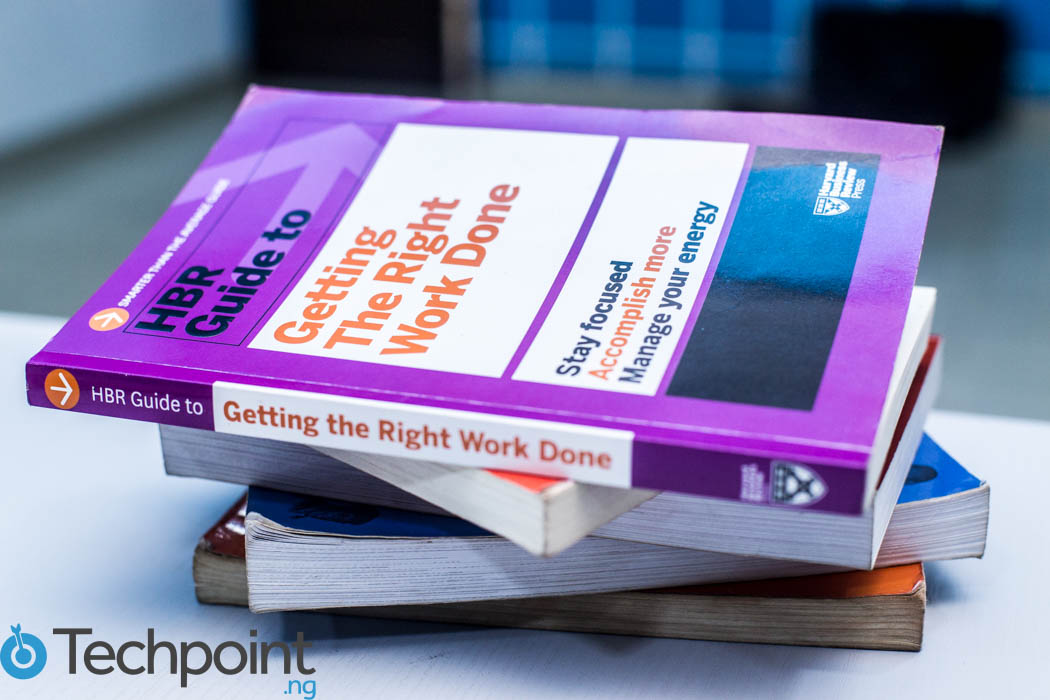 Nothing could be more daunting than having piles of work, stacked up to your throat. Funny enough, your to-do list doesn’t even help matters — it never gets shorter. After considering how difficult it is to stay productive, exhaustion  and worry set in.

The Harvard Business Review (HBR) Guide to Getting the Right Work Done thoroughly delves into actionable ways to stay productive and focus your resources where they will yield the greatest rewards.

There is a clear difference between getting work done and getting the right work done. Most times, because of human complexities, the (right) work to do and the right time could also be a complex loop. But just as a motherboard, this guide houses resourceful elements excerpted from productivity books — Getting Things Done (David Allen), Be Excellent at Anything (Tony Schwartz), the HBR Online Forum itself and others — all exposing how seemingly complex tasks could be simplified for maximum efficiency.

Without further ado, let’s dig into them.

Face it: you are a limited resource

The book begins with the harsh reality that human beings naturally resist — you cannot do it all. On the surface, acknowledging this could be depressing, but with a deeper insight, it can be tremendously empowering.

Brad (not real identity) — a very hard worker and largest revenue generator at his profession — recognises this. Hence, he wasn’t deterred when his decision to play with his children instead of utilising the plane’s internet, while on a five-hour long flight to Boston, landed him five hundred new emails, each awaiting his response.

Being keenly focused on getting the right things done, he did not obligate himself to begin responding right off the bat. He simply switched off his BlackBerry until he was in his hotel room, delegated his work, then made a few calls — all of which took him just an hour. Shutting down his laptop and phone, he enjoyed a fun-filled dinner with his family. Apparently, that was the right thing for him to do at that time.

In human endeavours, one thing is certain: there is no escaping the non-stop surge of distractions in form of emails, texts, and social media  — and that’s just the technology-based stream. How can we ever catch up with that?

Bottom line is to find your focus, master distraction (and avoid them), then get the right things done.

Prioritise your work — say ‘yes’ to saying no

If you haven’t spent the last year laying the groundwork before asking a raise from your boss — especially during austere economic downturns — then there is a great potential for your request to fail.

However, one formula exists for getting more money over time — your ability to prioritise. It is another crucial hint to getting the right work done. It works this way, more money follows more value. When you focus on the work that will bring the greatest reward, to your organisation and you, you automatically add more value.

When other intricacies arise to interrupt your priorities,  opt for the ‘no’ word without thinking twice. You can create already customised texts to decline projects/invitations, and even convince your boss on how your declining is best for the company.

A lingering misconception is that multitasking saves time. Another is that it reduces workload. Either way, multitasking does the reverse. Despite that this sounds rather far-fetched, the fact remains that you get more work done when you concentrate on one thing at a time.

Just know how to organise your time and break the habit of procrastination. A hint to the former is to avoid the mistake of opening your emails early in the mornings. Knowing that in mornings lie the most productive hours of the day, opening emails at this time automatically shifts your devotion to doing the task of others, while yours lags behind.

Whenever it seems you have the whole time in the world, take the advantage to work on long projects. These are projects you easily ignore because they either require too much work or a particular expertise you lack. Do not let long-term projects become last minute panic. Utilise spare times judiciously.

You will agree that since A looks complex, there is a tendency to ignore or push it. However, B seems easily accomplishable because it is simple and precise. Besides specificity, embrace using your calendar. Assigning a deadline to each specific tasks boosts your achievements.

Finally, reward yourself. Of course, you deserve a reward for accomplishing that tedious work. Take a break, get a box of chocolate, have a 10-minute chat with a colleague or do something else that rocks your boat.

Rituals in this context indicate routines to make good habits become automatic. It could be a 60-minute daily read or a 10-minute bicep workout.

A must-do ritual for anyone is having a meeting with the most important person in your life: Yourself. Cultivate this ritual and never skip it. Treat it like you would, a meeting with your boss. Another important ritual to stay productive is writing to-do lists, because as said by David Allen, your head is for having ideas, not holding them.

A lot of people give crucial attention to ‘time’, but ignore the vital part of their human nature — energy. We are quick to forget that time is definite but energy is elastic.

In an interview with David Allen and Tony Schwartz, they particularly elucidated the relationship between energy and productivity. They revealed why individuals should approach work as a series of short sprints, not an all-day marathon — all in a bid to stay productive.

Despite these and more indicators to stay productive, consistency is key. Aiming to do more, get more, explore more and be more.

To crown it all, I must say that this book resolves the ultimate challenge of mankind — knowing what to do when you don’t know what to do.