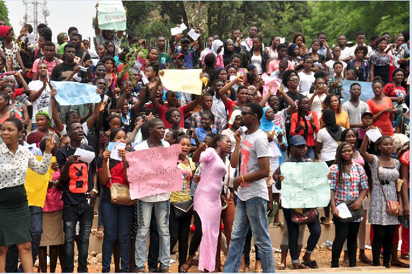 On Wednesday, the 5th of April 2017, several prospective candidates of the Joint Admission and Matriculation Board (JAMB), took to the streets of Calabar in a peaceful demonstration to protest against poor internet connectivity that is debarring their registration process. The protest held around the JAMB office located along Marian Road, and it was secured by security personnel who ensured that the protest did not span out of hand.

Registration for 2017/2018  Joint Admission and Matriculation Board commenced on March 20, and so far, several complaints have been logged from different states as regards the registration process.  Last month, Ekiti and Nasrawa state prospective JAMB candidates also voiced out the difficulties they were experiencing registering for the examination. The registration for the 2017/2018 examination is set to end on the 19th of April, which is in 12 days.

So far it has been said that many have described this year’s JAMB registration as frustrating and rather stressful experience.

This begs the question of how capable the server will be on the day of examination, considering the fact that the duration has been reduced to 2 hours compared to the previous 3 hours it used to be. Last year many candidates attributed their failures to poor internet service, which caused delays in rotation of questions. Also, a non-governmental organisation group — Centre for Information Technology and Development (CITAD) — has narrowed down the cause of mass failure of the 2016 JAMB exercise to poor internet service in the country.

However, while internet penetration in Nigeria does need to improve, for many that have complained about ‘poor internet’ service, they are actually talking about their inability to access the JAMB website. JAMB has to improve accessibility to its website, in order for candidates not to keep experiencing difficulties during registrations.

Several eCommerce sites have thousands of people shopping on them daily and they do not experience difficulties in accessing these websites. Government-owned websites shouldn’t be lesser, rather they should be more accessible and provide the needed service. Sex Girl Zurich

Update- The inability of prospective JAMB candidates to register for the upcoming 2017/2018 examination is fast becoming a turmoil . Prospective candidates in Makurdi, Benue State have destroyed quite a number of properties at the JAMB zonal office and has also engaged in brawling with officials, due to their inability to purchase forms and also for alleged preferential treatment given at registration centres by some officials.