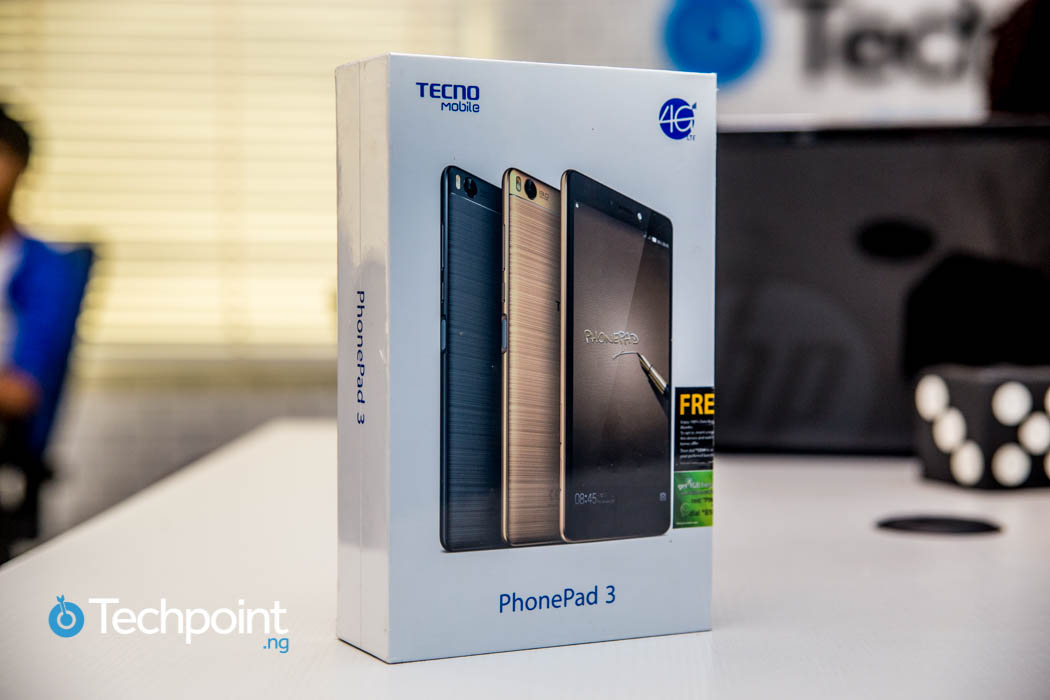 Coming after its predecessors; the PhonePad 7E, which was just launched last year, here is another one from TECNO mobile and it’s called; Tecno PhonePad 3.

The Tecno PhonePad 3, launched on the 27th of March 2017 with a lot of improvements from the Phone Pad 7E, has been tagged “Do business, Stay mobile”. It has specific intentions to facilitate business communications for its users even when they are on-the-go.

Let’s have a look at the new PhonePad 3 by TECNO mobile.

The box is a white rectangular cardboard encasement with a little detail of how the phone looks like on the front. the name of the phone is written at the two sides of the pack and the company name is written on the other two sides.

It’s a cover styled package, to reveal content the top is pulled upwards

The Accessories that come with the PhonePad 3 are

Taking a good look at the PhonePad 3. I must say, there are a lot of cool stuff about it.

You can plug in your earphones into the headphone jack, and it’s at the right top corner of the phone

The SIM tray is at the left side of the phone, it can be accessed by pushing the sim ejector pin into the tiny hole on the tray

There is a memory card slot in the PhonePad 3, users are not restricted to the amount of space on their phone. It is just below the sim tray and can also be accessed using the ejector pin.

Just below the power button is the fingerprint censor. This is somewhat strange to me, I have never used a phone with a fingerprint censor by the side of the phone. It’s still so cool though, very easy access however you hold the Phone.

The speaker grill and the USB are below the phone

Looking at the PhonePad 3, with a weight of 171 grams without it being fitted into its case. Weighing 174 grams with the case on. These weights are optimally okay for the type of properties that come with the PhonePad 3.

The screen which is large will really help business owners communicate wonderfully and still get their work done even when they are on the go.

The price of the PhonePad 3 is yet to be announced as at the time of this post because the device is yet to be launched by the company.

this tablet is cool. i may likely get one. the only shortfall here is that it comes with android 6, instead of 7