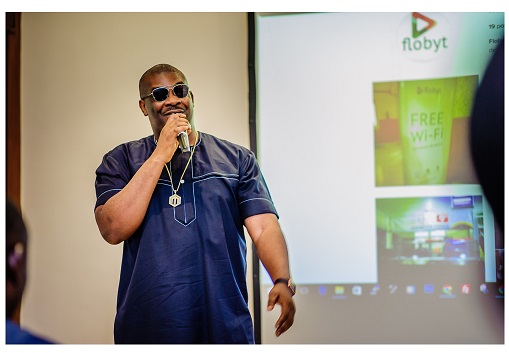 That hot afternoon of March 2012 when Don Jazzy officially confirmed via Twitter (in now deleted tweets) that Mohits Records — one of the biggest record labels in Nigeria at the time — was closing shop, a dark cloud was cast on the music industry.

Screenshot of the tweets

Regardless of the fact that we all saw it coming, considering rumors of disagreement at the helm of affairs in the music management outfit, it still felt surreal for Nigerian music lovers and fans of the series hit maker across Africa.

However, the legacy of Michael Collins Ajereh, or Don Jazzy as he’s popularly known, did not die with Mohits Records.

The man did not even pause to catch a breath, in style with the lyrics of rapper Reminisce’s hit ‘Kako Bi Chicken‘, he simply upped and “moved on to greater things” and is not stopping to see anybody in a jiffy.

Five long years after the seeming Mohits setback, his brain child, Mavin Records has risen to become one of the biggest record labels in Africa. Hits after hit, talent by talent, Don Jazzy doesn’t look to be stopping anytime soon.

When Flobyt, the free Wi-Fi startup he co-founded was launched, Don Jazzy became the most recent music mogul to join Jay-Z,  Ryan Leslie, and our own Eldee as aspiring tech billionaires.

Flobyt, the startup he co-founded is a company with two products, one that has already launched, and the other is a “game changer in social media” that is yet to be unveiled.

According to co-founder Dele Odufuye, when Don Jazzy was brought on board as co-founder, Flobyt trashed an entire codebase based on the user experience advice from Don Jazzy and his team. As a social media influencer with a huge online and offline following, he brings an in-depth understanding of the human interaction aspect to the business

Amidst laughs at his stunted Yoruba accent,  Mezut Ozil jokes and jabs at a well rounded “one-pack” belly, Don Jazzy talked about his recent foray into investing in the tech space.

Victor Ekwealor of Techpoint: Your team played an active role in mapping out what Flobyt has become, what has the experience been like?

Don Jazzy: It’s been a beautiful experience. You see, I have come to a point in my career where I have decided to look into different aspects and diversify a lot. Technology is a key part of my diversification process, but it surely is not going to be technology alone. I am currently working with a guy who owns a patent that is going to change a very key aspect of the way things are done in a particular industry in Nigeria, Africa and even the world at large.

There is another person I am working with and he is creating an alternative source of power that does not use any of the fuels we are used to. I have worked with different other people. At this point where I plan on going all in into investing in technology, we basically search for people who understand the technology space in Nigeria, have done great things and have a high success rate. When we meet these people, we talk to them, exchange ideas and know what it will take to move forward. Basically, that was how Flobyt was born and the other ventures still under wraps will come to fruition through this same process.

VE: Does this mean you are fully transitioning into a Venture Capitalist?

DJ: [Long Pause] I can’t say that it is a transitioning process because I am already a venture capitalist even though most of it has been under wraps for a long time now. There are a lot of businesses and endeavours that you probably don’t know that I am an investor in, howbeit a silent one. When the idea of Flobyt came, I saw it wasn’t something that needed funds alone, so I decided to go all in and not hide behind anybody, hence the extensive branding and media publicity.

VE: Setting aside the fact that every Igbo man is automatically assumed to have a business interest, would you consider yourself inherently a business man?

DJ: I may be a little bit different from the typical businessman you are used to in my methods, approach and outlook. But that does not change the fact that I am a businessman, an astute one at that. So yeah, I am a businessman and I hope I am a good one by the standard of techies and tech startups. [LAUGHTER]

VE: In business, how did you gain the knowledge that you have now, any schools or training?

DJ: My mother sold akara while we were growing up, and the little bit of business I know was learned at her feet. I did not go to any schools or get any training in business management. She literally taught me everything I know today. The little I learnt from her has shaped me into building and sustaining successful businesses in the past, and even now.

VE: That is very interesting. What do you think are the major hurdles preventing celebrities and affluent people in Nigeria from investing in small businesses, especially tech startups?

DJ: It is simple; they do not understand it. To the typical older generation business person, technology is a new thing, a novel idea that completely confounds him/her so most of them are short sighted and completely disregard it.

Even though they’ve seen the Mark Zuckerbergs of the world hit it big, you do not expect them to still put their monies in what they cannot comprehend. On the other hand, there are not enough success stories on the home front to spur them on; they do not see enough people hitting it big locally. But recently, I have actually met with a few billionaires who are interested in the space now.

As an afterthought, as if he did not want to mention it at all, Don Jazzy also hinted at a likely collaboration between himself and eLDee The Don on investments and tech startups.

It is funny you mentioned eLDee because as we speak, he and I are currently working on a collaboration.

This is a big deal considering the fact that eLDee is one of the Nigerian musicians with a strong technology background. He is also an investor in Washist, Nigeria’s first ever on-demand laundry service, and owns PlayData, a broadcast analytics solution for musicians and advertisers.

At the end of the day, it was really insightful and informative talking to the Don (as usual) and an afternoon well spent.

The interview winded up on a high note as he left us hungry for more venture capitalists in the tech space and he left literally hungry to lunch on eba and soup.