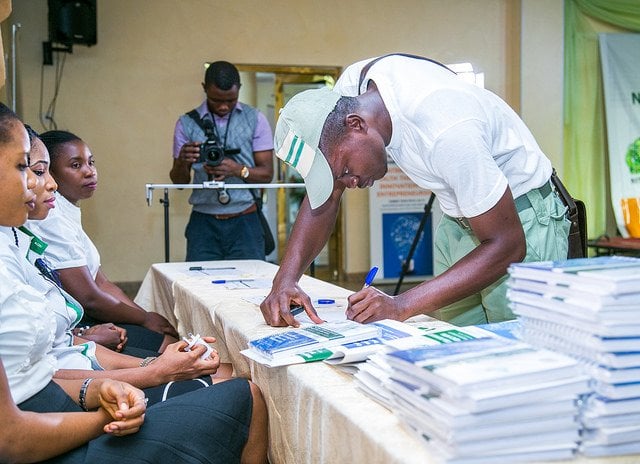 The National Youth Service Corps (NYSC) has introduced biometric clearance for corp members in the South West. This was disclosed at a training workshop, held in Ibadan, themed ‘Ensuring Accountability in Corps Members Activities Using ICT’ on the 2nd of March 2017.

Director-General of the NYSC, Brigadier-General Sule Kazaure, said that the introduction of biometric clearance is in a bid to monitor corps members and eradicate payment of allowances to ghost corps members.

This is not a new initiative however. In 2015, the then Director-General of the corps, Brigadier-General Johnson Olawumi, during the inauguration and demonstration ceremony at Kuje Area Council, Abuja, introduced the National Youth Service Corps’ biometric data capturing technology to help keep tabs on corps members.

The biometric clearance was supposed to kick-off in September, 2015, for Lagos and Abuja, and extend to other geo-political zones in 2016.

While we can confirm that biometric clearance has since kicked off in Lagos and Abuja, the same cannot be said of other states in Nigeria. But if the recent announcement is anything to go by, biometric clearance will be extending to corp members in the South-West very soon.

One can only wonder why it is taking so long to reach all geo-political zones of Nigeria. Nevertheless, the initiative is laudable. Biometric clearance will enable accountability and curb corruption to an extent, by reducing the rate at which NYSC workers and corps members connive to defraud the system.

It also ensures security and safety by discouraging frequent travelling by corps members during their NYSC year, which sometimes leads to accident and, according to Brigadier-General Suleiman Kazaure, are mostly unnecessary.

Share your opinion. What do you think of the biometric clearance initiative? Do you know other regions in Nigeria where it is currently being implemented?