6 exceptional Nigerians who work at Apple 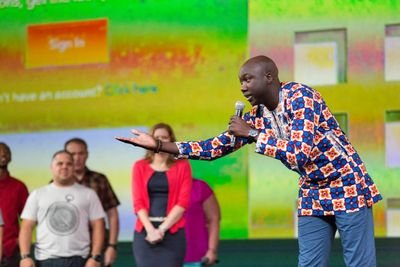 When Steve Jobs launched the “Here’s to the Crazy Ones” campaign for Apple in 1997, it marked his return to a company he co-founded 2 decades earlier in 1976, but was forced to exit in 1985.

Without a doubt, that 1997 commercial played a key role in repositioning a then dying company, in arguably the most remarkable corporate turnaround in the history of business. Today, twenty years after, Apple remains among the world’s most valuable brands. So it comes as no surprise that working at the company is a dream job for millions of people the world over.

So when in 2013, Apple acquired an online mapping startup, owned by a certain Chinedu Echeruo, for $1 billion, the news was met with great excitement, especially among Nigerian tech enthusiasts. Before then, it would seem, no one expected any Nigerian to be associated with such a brand as Apple.

But as you are about to find out, there are Nigerians who actually work for Apple; we scoured the internet and discovered a few of them.

Here are 6 exceptional Nigerians who work at Apple.

Tope joined Apple in November 2016 to work on the Apple Maps team in California. In his free time, Tope loves to play football and is also an ardent follower of basketball.

Debola Olufon has a history with Apple, dating as far back as 2010. In his humble beginnings, he started off as a floor worker for Apple Retail in London. As a workshop facilitator, he provided training for members of the public and press on new Apple products. He took on a couple other roles after then, including ‘mentor & recruitment coordinator’ and ‘Apple Expert’.

Not satisfied with his position, he proceeded to the London Metropolitan University to obtain a post-grad diploma in HR management (CIPD). He has since returned to take on the role of HR Admin at Apple in London.

Sefunmi Osinaike describes himself as an “advocate for entrepreneurship as a means for solving distinctive problems”. True to his claim, he co-founded Pave, a time management tool for students, while still studying electrical and computer engineering at the University of Waterloo in Canada.

Looking for a challenge to expand his horizon, Sefunmi decided to take on the corporate world, cutting his first teeth as a Program Manager at Microsoft’s Redmond HQ.

By August of 2016, he had moved on to join Apple at the company’s Cupertino HQ, where he works in product operations which puts him at the heart of iPhone production. But don’t expect him to leak any details about the upcoming iPhone 8; you’ll have to wait until launch day in September/October.

Tobi Ayanleke is an alumnus of Airforce Comprehensive School, Ibadan, Nigeria. Before joining Apple in November 2016, he was the country support manager for HP in Nigeria and Ghana, a position which he held for 2 years.

With a wealth of experience in supply chain, IT service delivery and operations management, and an MBA in global management to boot, Tobi had little trouble sealing a sales management position at Apple in Canada.

2 years after he graduated with a degree in geography and town planning from the Kogi State University, Adejoh Ogbe proceeded to the University of Northern Iowa to obtain a master’s in Geography. There he worked on a “spacial analysis of foreclosure and neighbourhood characteristics in Miami metropolitan area, Florida” for his dissertation.

Adejoh joined Apple, as a GIS technician consultant from Apex, in January 2016.

Emmanuel Chukwuezi is a senior iOS and Mac support specialist at Apple’s European Headquarters in Ireland. Before then, he worked as an enterprise account manager at eir Business, a Dublin-based telecommunications company, for 5 years.

Do you know any other Nigerians who work at Apple? Please let us know in the comments section below and we will update this list accordingly.

Okay. What you wanted to say? The nigerian people have great knowledge about technology. They also work at the google and so many places.