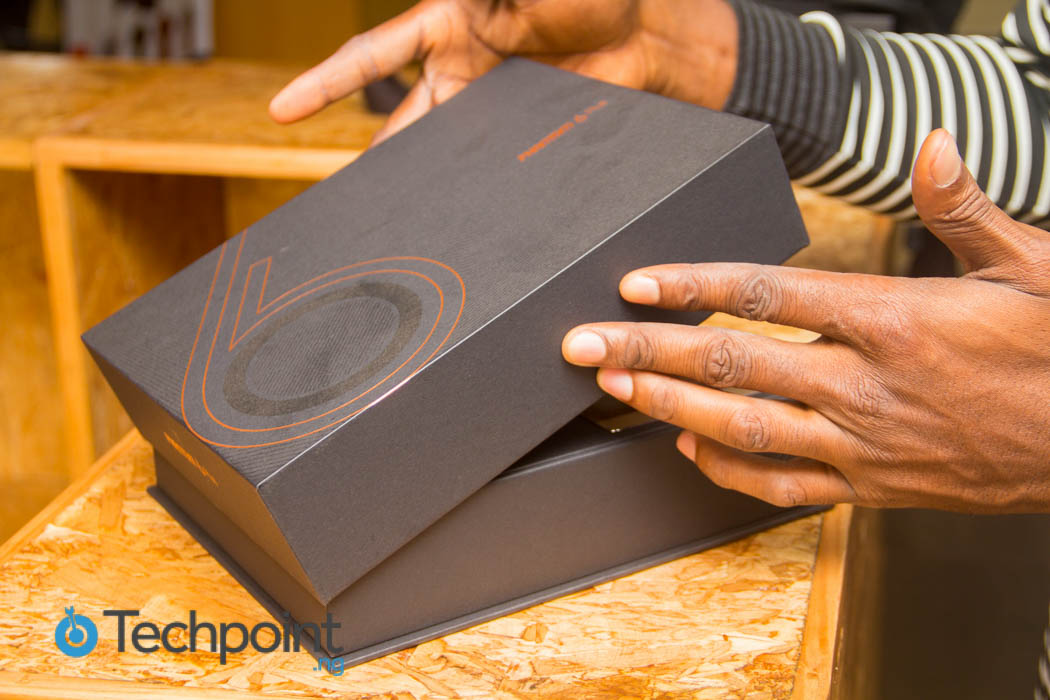 We are unboxing a unit of the Phantom 6 Plus to see what “the Beast” is packing inside its carton.

There was a seal at the opposite end from the “6”

After tearing off the seal…

…the second box was slid out easy from the “6”. Perfect views.

There was a slimmer box atop the larger box. Three boxes in all including the glove-like casing

Headphones and OTG adapters in the other corner to enable your device act as a host to other devices via the USB port.

That was all that was contained in the slim box.

The bigger box was easier to open

The device was nestled on top with yet another hidden layer.

Under the secret compartment there was a Type-C USB cord as earlier announced, two removable heads for the charger.

Here’s to making sure you are steadily plugged in!

The device itself had the usual nylon wrapping covering the screen…

…and on the back too!

The device itself in its 6-inch beauty is compatible and light.

And the pouch has compartments on the flap for 2 SIM cards and an ejector pin.

On the top there is a front facing camera, speaker for calls and soft flash for the camera.

Speaker grille, microphone and charging port are under the phone

The volume rockers and power button are on the right side of the phone,

while the SIM card slots are on the left

The camera, flash and fingerprint scanners are at the back

As we have seen the plenty components of the box, I will be bringing you a comprehensive review in a couple of days to see what “the Beast” is packing under the hood.

Even Samsung knows Tecno is after them. With the rubbish Note 7 that they went to goan make.

i think tecno is in front of them now

Same here. I usually do not even usee them, but this is different.

Kai! bone jokes, I really want to see the stunt Infinix will pull to beat this. Not in this LIFE. They will die trying. LOL

Well. Don’t be too sure. Lol

But they will really die trying. LOL

Honestly, it’s worth the price. I even think they outdid 95k. Classic yet affordable.

Lol. Not “affordable” really but worth every penny!

yeah its worth it…

spelling out the CLASS started from camon C9 I guess.

This website is my favorite spot for unboxing pictures. I’m impressed at the quality of work you guys do.

You just made me re-fall in love with P6 plus.

i think you sould buy them drink

Lolz. They should buy for me for choosing to visit their website.

should be the other way round or dont u think so?

The problem Tecno producers has not solved is the patch, the patch is too fragile it doesn’t last…….

patch or pouch?? i dont really get

ok i tot as mch..good one

ok..wanted to be sure tho

mine has lasted oo.

How long can the ba3 last on heavy usage?

i mean on heavy usage..16hrs is much

sorry its too mch. a friend said 7hrs

ok its a mistake

ok..thanks for the correct value

which device is that pls?

ok i will look that up

guess uv done that and satisfied with what youve seen and read?

you are always welcome

so do you have the correct lasting hour now?

12hrs..so you see how powerful

packaging of the device, hmm i give it a 100% also colour combination is perfect

Nougat ke? I don’t understand all these craze for latest OS though. I am yet to fully understand Marshmallow.

The phone specs are really great.

I still prefer p6plus to p6.

6 is actually sleeker and fresher abeeg

Victor please where did you get it for this price? jhulianroyson@gmail.com, please contact me