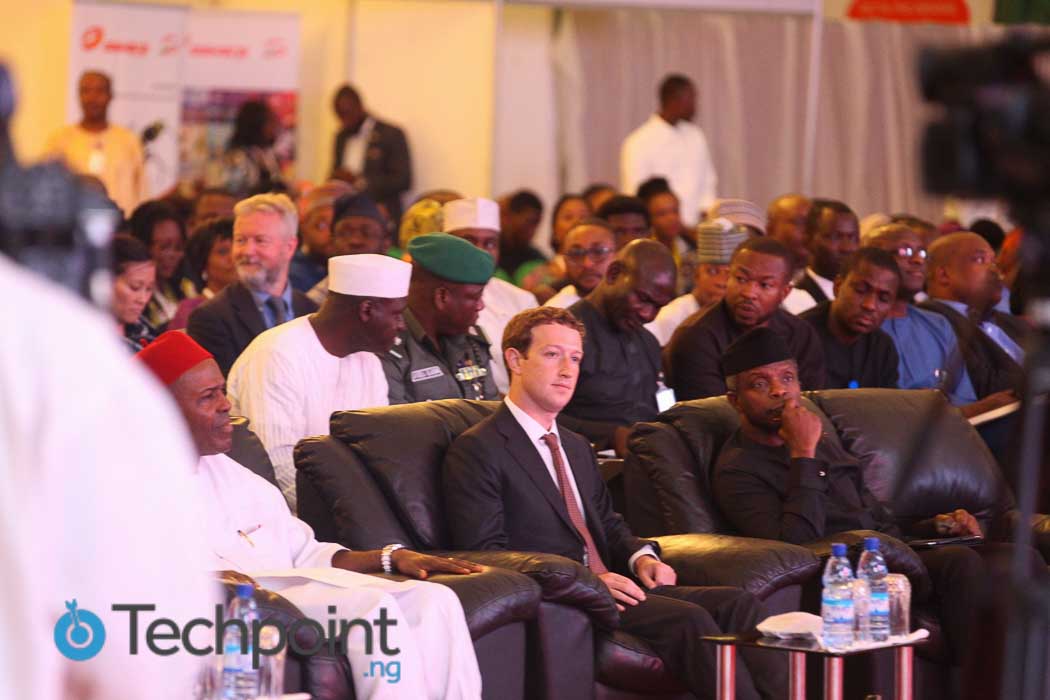 The banquet hall in Aso Rock earlier today hosted individuals from different sectors in government and in the technology ecosystem. Although the Aso Villa Demo Day (AVDD) finale was meant to have taken place months ago, Mark Zuckerberg’s appearance at the event was a good surprise for the startups present.

Mark Zuckerberg, Prof. Yemi Osinbajo and Adebayo Shittu with the 30 finalists before entering the banquet hall.

After taking several pictures outside the hall with attendees, Mark moves on to the startup exhibition area

Mark engages entrepreneurs at the startup exhibition area of the hall.

Everyone rises for the National Anthem.

Iyin Aboyeji of Flutterwave climbs the stage to give opening remarks.

The 3 finalists Shuttlers NG, Tracology and RecyclePoints are welcomed to the AVDD stage to give their final pitches.

Mark Zuckerberg climbs the AVDD stage to provide feedback on the pitches.

Prof. Yemi Osinbajo climbs the AVDD stage to respond to Mark’s speech and also give his remarks on the pitches.

Prof. Yemi Osinbajo concludes his remarks as everyone applauds.

Mark receives Prof. Yemi Osinbajo back to his seat.

Everyone rises for the National Anthem to close the maiden edition of AVDD.

Aso Villa Demo Day Finale in Abuja came to an end in an emphatic fashion.

During the event it was made clear that the three startups Shuttlers NG, Tracology and RecyclePoints will be given a prize money of ₦3 million each.

Aso Villa Demo Day isn’t all about the proceedings that went down in Abuja today, the memories take us two months back when it all started at the Land Mark Event Centre in Lagos after which the 30 startups were selected.

3 million prize money? Now that is peanuts… very discouraging! At least I expected nothing less than 10 million per startup with other incentives and that three million for the remaining 27 startups. I can imagine they spent tens of that amount alone for this event today. That prize is ridiculous.

You have a wrong mindset. What startups need is not FREE money but the desire and passion to succeed. The world doesnt owe anybody nothing for failure.

Forget the mindset and I don’t have a wrong one anyway but be sincere that prize money from a whole Nigerian FG is ridiculous. At the same time I’m not even advocating direct cash prizes but rather in the form of various supports to help them grow their business or as indirect investments. No matter how you look at it funding is a critical aspect for startups and its the reason many startups either fail early or fail to reach their profitability phase.