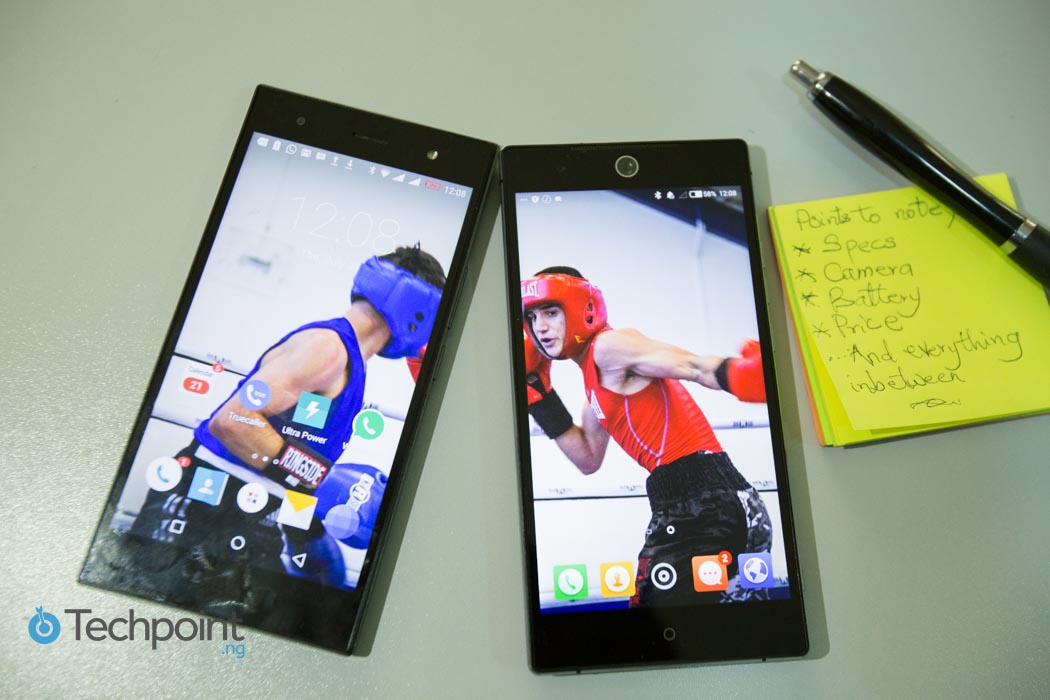 Comparison of smartphones is a healthy way of demystifying specifications, debunking claims and helping consumers concisely choose smartphones. Today, the Tecno Camon C9 will be pitted against the Infinix Zero 3; two camera giants slugging it out in a battle of specs and practical tests.

The choice of these two devices is informed by their similarities and contrasting in this case will put things in a better light. There are basic features that we look for in smartphones before settling for them. These parameters will be used for measuring these two devices. Hopefully, by the end of this article, you would have made up your mind on which one of the two devices suits your needs.

Expatiating on this particular point is a waste as you and have felt the pain of device lag and having to wait for seconds that seem like hours for a “smartphone” to perform a simple task. The Tecno Camon C9 has a 2GB RAM and Octa-Core processor while Infinix Zero 3 has a 3GB RAM and an Octa-Core processor too. Maybe the 1GB disparity makes it unfair to compare, but they are in the same league, so compare we must.

The two phones booted up at nearly the same time, but Tecno Camon C9 was 1-second faster to beat the general 1 minute 9 seconds and 42 milliseconds start time.

I would have added the number of apps that had to stay open for these devices to freeze up, but trust me both never freeze.

Winner: The Tecno Camon C9 takes it away in this round.

I particularly love the design of these two devices. They both have flaws, but they work nevertheless, mixing style and functionality.

The Infinix Zero 3 is surprisingly light and has a smooth feel to it that feels fragile, but the squared edges provide a firm grip.

Rounded edges in the Tecno Camon C9 are a beauty to look at but make grip an eternal struggle of hand muscles. And it far outweighs the Zero 3.

Winner: Weight and handling automatically places the Infinix Zero 3 atop the score-board in this area.

This might look like unhealthy competition on the part of the Camon C9 based on the numbers, but in case you have not heard, the quality of a phone’s camera is independent of its megapixel. So a smartphone with a high megapixel does not guaranty great images.

Pictures taken under different light settings will be the judges in this round.

Winner: They say the Infinix Zero 3 shoots 4K videos but in the context of smartphone photography, Tecno Camon C9 takes this round again.

In reviewing both devices, I ran comprehensive battery tests and  judgement will still be based on this as the batteries of the two devices have not worn out in any way.

In reviewing the Infinix Zero 3, it took the 3030 mAh battery 3 hours to a 100% from being flat. And it lasted 5 hours and 6 minutes of intensive usage before complete shutdown.

The 3000 mAh battery of the Tecno Camon C9 on the other hand, filled up from zero in 2 hours 25 minutes. Under a more intense use, it lasted 6 hours and 10 minutes before flattening out.

Winner: Even with a lower battery power, the Tecno Camon C9 held its own and is clearly the winner of this round.

Jumia, Konga and SLOT are our reference points for price check as they top mobile phone retailers in Nigeria; apart from the undocumented individual vendors in Computer Village, Main Market and Alaba International.

Winner: In this category, the Tecno Camon C9 wins again.

A 20.7 MP camera on the Infinix Zero is seemingly no match for the Tecno Camon C9 until it springs up surprises in other departments to cover this seeming deficiency.

This comparison of two beautiful devices is not a battle for the best per se, it just lays the facts — which are specs in this case — bare for your consideration. As I stated earlier, the two devices work for me, but when a choice is imperative, I hope this article serves as a guide.

Truth be told after i handled the camon C9, many flagship device will struggle against this phone camera

The camera is amazing

Get one for me

The camera is amazing, no doubt about that

This is soo true

They will only struggle. They can’t get close

is anyone racing here
you and @tol@tolanitolani:disqus

lmao is it actually a fight issue??

Be specific next time only d front camera is way ahead, There are many phones that have better cameras than the one of the C9

but we wre talking abt the camon c9 and infinix zero 3 here nah??how did other fones come in

Like iPhones? Because I know they have one of the best phone cameras

lol its of no doubt that,even with the quality of the camon c9 camera,the price is affordable,there are flagship phones that will go against the camon c9 but they cost time 2 or 5 of the camon c9,so isnt it better to just use the c9?

As you can al see, the camon c8 is much better than the infinix

Maybe he is referring to the camera quality of the C9. It looks like he is a picture person. Although, some people don’t really care about camera quality.

That was a typo. Sorry,

No argument about that at alllll

Lol. That is true.

Arguments can be made

Lol. But this one is too easy.

Well, I am not a fan of Tecno but in this competition, I will have to go with the Tecno Camon C9. It is just a better choice in terms of price and function.

I have to give it up to them, they really have been innovative lately.

which function are u tokn abt..is the the function of speed?? tecno gat it

How are you sure about the speed of the C9? Have you used it before?>

The camera quality is surprisingly good.

Everyone knows this mehn

What do you mean?

Yeah, i agree with you too

Considering the C9’s MP is less than that of the other phone .

It is amazingly good

Bet The back camera of the Zero 3 is better

what do you kw abt photography??

see this one
theres nothing abt photography here

you are correct,altho the back camera of the c9 isnt bad too but stated here,the zero 3 looks better

In terms of camera quality? The C9 is better, are you sure we saw the same thing.

It has more MP right? But the C9 has a clearer camera

specify the one u are voting for??

Not in everything tho

but in a good percentage

I don’t understand. What percentage?

Ok, which one then, since you say not everything.

always a good one anyday

tot u stated the reasons ursef?

What is clear to see?
There is not much difference between both phones, they both have their pluses

they are almost alike
almost the same sef except the ram

It is really hard to choose between the two phones, but i’ll go with the Camon C9 cos of d front camera, i love selfies

If I were to choose, I would chose the C9 because;
1. It is a known brand
2. It is more affordable

who doesn’t?
It’s rear to see people take pictures with back camera again except they’re capturing something other than themselves

Only reason i’ll pick the C9 0ver Zero 3 is d front camera, then maybe the battery, though there’s not much difference between d batteries

ok cos the extra 30mah cant compare to the camera..good reasons

Yeah but the cameras are soo different.

The C9’s camera is clearly much better.

hmmm i think there is a diff..review the shots

what’s the size of the infinix zero3’s camera?

All in all both phones are good

no doubts they are

they are both great premium phones

no doubts on ur statement

yeah they are buh one is beta.

Yes, both of them are good. But one of them has to be better.

lol..abi.he should try it first

yeah the c9 is really a good one

they are all good phones thats true

How did you use it for a while tho?

lol..its already that way..they are fighting to survive i think

as in ehh..from the review it was so killed

he showed it up there nah,why are you guys saying u didnt see it

Well, the review is here but also a lot of people have confirmed that the camera is cool.

haha this isnt right
its just a mere comparison

HAHAAHA. Maybe in terms of camera quality. I think they are an “OK” brand.