This is the Tecno Camon C9 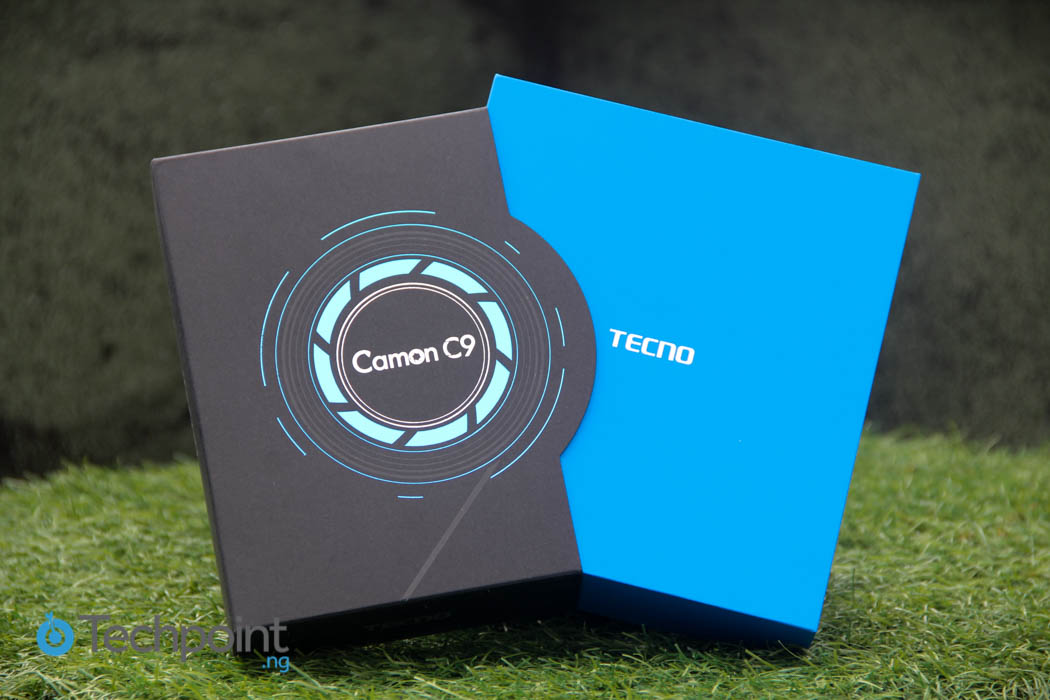 We are going to take a no holds barred peep into this device they tell us is badass. Come let us rub minds together, look into the box and see if it looks the talk.

Box itself is a nylon-wrapped affair….

…reminiscent of the days we unboxed Cabin biscuit.

After all the unwrapping is done, we have a well designed blend of blue, black and white

Or is that silver sef? I am not sure.

But common sense says it’s a camera lens something something. Since the Camon range is camera focused, it makes sense, yeah?

Then there’s this particularly difficult seal…

…that took a while to break!

The main compartment slides out of the pouch-like pouchy thing. Fancy.

Finally we open the box and lo, there lies the Tecno Camon C9.

Underneath the compartment are the usual accessories, and some more

The  charger head, USB cable, earpiece, warranty, the device itself and a mystery black box.

Alas! It is a phone pouch

Been a long time we saw those, at least scratches won’t come early to this device.

Oh, lest I forget. There is this “for freshness” little bags you are not supposed to eat

At the top of the front-side, there is the flash by the left side, and the 13 MP Auto-Focus camera in the middle

The speaker grill is right above the whole setup.

Still in the front, the menu buttons are located at the bottom

The earphone jack is at the top

On the flip-side, there’s the 13MP camera with flash underneath

Below that is the second speaker grill for music

In the left-hand corner underneath the phone is an allowance made for prying the cover open, the charger jack comes next and the pin-prick hole at the other end is the microphone for making calls

Upon prying it open, I discovered the 3,000 mAh battery is stuck there; non-removable.

And if you are wondering (like I was) what the ejector pin is for, the image above explains it. It is for extracting the SIM cards after inserting them.

Memory card slot is on the left-hand side. And all those other ugly workings that the case covers

5.5 inches and that thin? The Tecno Camon C9 is “looking” like a good deal. There is something iPhoney about the width from this angle, abi?

The Tecno Camon C9 also has a rounded feel to it, thanks to the slight curvature behind.

There is an improvement in the front camera from the Tecno Camon C8’s 5MP. There has not been any price marker, but I am estimating a ₦45,000- ₦55,000 range.

I also hear there is an iris scanner that lets you unlock the phone with your eyes. Exciting hearsay, the more reason I would hasten up on this review, we need to see things for ourselves. I would bring you reports in a few days. Watch this space.

“Been a long time we saw those, at least scratches won’t come early to this device.”

The boom j8 have pouches, correct me if I’m wrong. The camon c9 looks pretty decent tho. Looking forward to a full review.

I think I read of the J8 on Techpoint. Music phone right?

What I like about the C9 pouch is, when yiu cover your phone, a pristine looking analog clock appears on the round space.

Nice pictures! Which camera do you use if you don’t mind me asking.

That cant be a phone camera.

The 13 MP front camera seems too good to be true.

Well, people have been saying is true so you better believe

The device has been launched na, and if you are on instagram and twitter look out for the C9ja tour hashtags.

I will check them out.

People that are using it.

I see. Then you have to take their word for it.

I am telling you.

But it’s true. I have test run the phone sha.

Oh thats great! That means all the specs are authentic

They truly are. Believe me.

The phone producers dare not put up a spec that is not truly associated with thir device. that one is lying na.

Yes, you are right.

It is. Believe me.

The camera is amazing I must tell you. I used Camon C8 until yesterday when my pocket was picked.Went to do a little survey and I saw the phone; really amazing!!!

Wow, sorry to hear that.

Really. How sharp is the 13MP front camera? I want to buy the phone bcos of the camera

I finally got the phone. To be sincere, I’ve gotten more friends since I got the phone. I was at an event yesterday and people gladly took selfies with my Camon C9 and relegated their own cameras. I had to latter send the pictures to them through Xender. Some that couldn’t wait had to drop their watssapp numbers… I don’t like pics like that but I must say the front camera have made me take more selfies than I’ve ever done in d past days.

Best camera in the market you can get at that price

It awesome i tell you. i’ve seen a picture by it. It’s simply amazing

I saw some threads on Nairaland with the pictures. Love them

Yes, I recently did. Stunning pictures.

As in. The tour looked like it was complete fun!

Hopefully there’ll be another one

make we cool down wait

This is a nice write up. Good work.

Are you having a crush already?…errmmm, on Camon C9 I mean….

Im sure you do

I wonder how much the phone would be.

I just know that it can’t cost a fortune

It’s tecno. they’re known for feeding us with affordable products!

The device looks amazing I must confess..but I just don’t wanna see the price at 50k please,its nice but the price should be nice too..just hope so

LOL, but how much then would you want it to be or rather how much is worth it ?

I’m with @Oyindebrah. Let the price not be more tan 45k. shikina.

It might be less than that. If it is, then Tecno would have killed off its competitors in one fell swoop.

Lol. Don’t be too sure. But the fact remains that they tried. Really tried.

I’m glad we are of same view on this.

I share most of your views. Good to see a tech savvy female.

Clearly Tecno has decided to peg it at 50k.
e worth am tho’

Lol. Turns out it actually goes for 50k.

45k but not 50
Its a Tecno device and I trust TECNO that’s always giving us affordable things,with good features,they will still make it affordable,if its more than 50k,a student might find it hard to buy,the camon c8 was 25k that time nah..last year

I bought two,gave my mom one,and my dad 1

sis, I doubt this one will be anywhere near 35k

The phone is too gbaski joor

someone rumored 43k. They should make the prce available alreadyy. We can’t wait!

If it is pegged at 43-45, then it is utterly good to go. Tecno stepped up their game. They deserve some applause though.

No more referred to as chinko . Thank goodnes.

yea dats true .. i remember back then tho