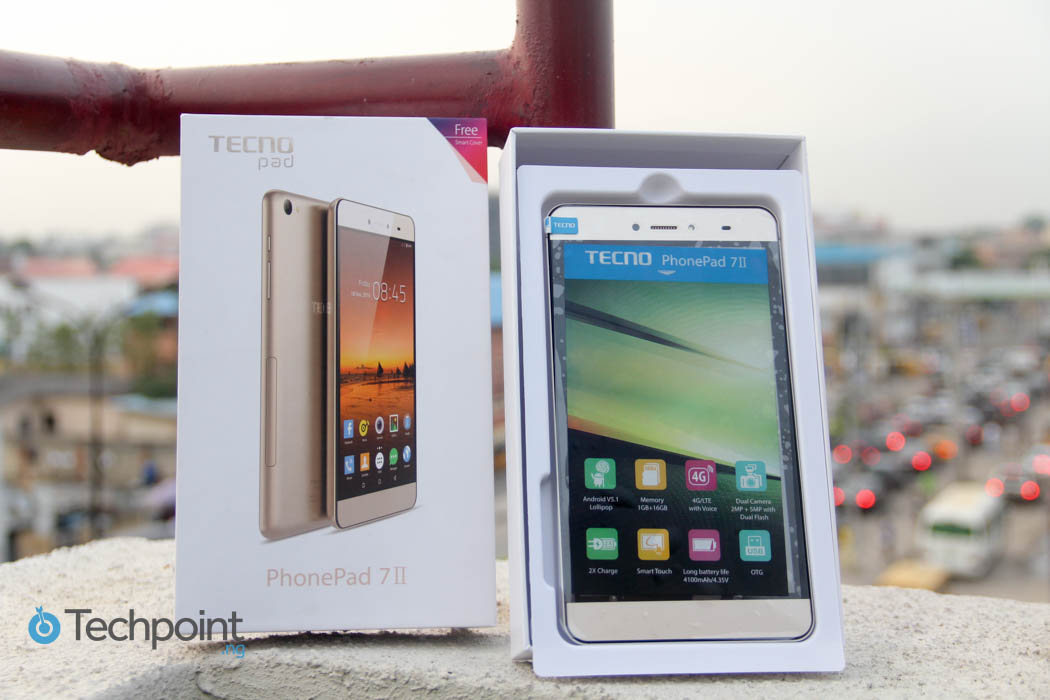 This is one of the recent Tecno tablets in a while, and this one was designed to serve as phone and tablet at the same time. Let us take a look inside the box.

When the box is opened, the Tecno Phone Pad 7 II is nestled inside a plastic casing in the box

There’s a  nylon cover on the face of the phone that has dud icons painted on.

Let us look inside the box properSurprisingly, there is not much going on for the Tecno Phone Pad 7 II in terms of accessories. Underneath the device itself in the box, there was a USB cord, charger head, the User Guide in English, a Tecno warranty card and a small literature for PalmChat. Like I said, not much going on accessory wise.

I am used to volume button being on top and power below it, so my hands kept flying to the power button and involuntarily locking the screen.

The headphone jack is on the top right-hand corner

Under the Tecno Phone Pad II is the speaker grills, charging port and tiny inbuilt microphone for calls

Speaker, front camera and flash, are on the top of the phone

At the back of the Tecno Phone Pad 7 II, there is the 5MP autofocus camera with flash and the non-removable 4,100 mAh battery

The Tecno Phone Pad 7 II is a phablet(phone and tablet). At 7 inches, it feels awkward in my grip, maybe because I am used to smaller devices. Its slickness makes the phone slippery and makes firm grip a problem, so users may  need to get a phone pouch or skin to prevent accidental slips.

On the other hand, it might not be that cumbersome to type on after all.

No announcement of an official price has been made as of press time, but I am predicting a range of ₦25,000 to ₦35,000, which would not be a bad bargain.

Overall, the Tecno Phone Pad 7 II looks like a good device on the outside, so be on the lookout for the full review soon where I would delve into its workings and see if the phone’s performance matches its fine  build.

I would be scared to put this tab on the edge like that o. Will be scared of it falling. Nice review.

Lol. See what you are concerning yourself with.

What can I do na. It looks scary.

My friend has this device. Really amazing.

sup with its heavy usage?dos it hang?