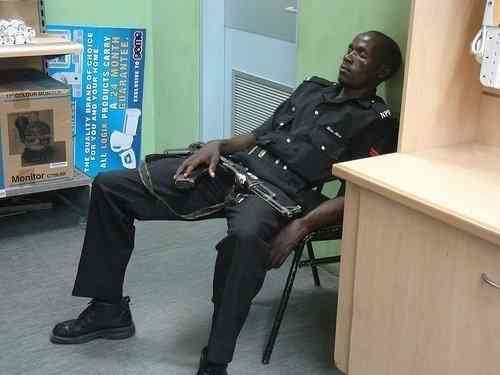 Since the proposed recruitment of 10,000 Nigerians into the Nigeria Police Force was announced last year by President Muhammadu Buhari at the National Security Summit in Abuja, Nigerians have been hyper in anticipation of the application process.

A family friend wanted to get into the force, so I have been following the news closely, Googling once or twice every week on the person’s behalf. Finally, it was announced that the recruitments were beginning on Friday the 1st of April. An April Fool’s joke? I wasn’t sure at the time.

After checking and confirming the two websites put up for registration, I made a mental note to call the family friend. But before I had the chance to do, news started filtering in that the site had crashed. I was shocked.

Upon confirmation, the sites provided had indeed crashed possibly from the amount of traffic that hit it at once. The server at www.ngf.gov.ng could not be reached.

Even the Police Service Commission’s website that was provided as an alternative was not left out of the traffic stampede, this one seemed to have exceeded its bandwidth. According to a report in the Punch newspapers, a police source said candidates started registering online from 4am on Friday when the portals opened for registration and that as of 2pm, over 8,000 candidates had registered online. The traffic was huge and that explained why many applicants could not access the websites because the servers were down.

According to Ruth, an intending applicant who tried unsuccessfully to register.

I wonder where they got the 8,000 already registered figure from. I started trying since early morning of Friday and it has been like that.

Emeka, another frustrated applicant shared Ruth’s opinion with a slant of his.

See,let me tell you, it’s all a scam. They’re just doing this for publicity so it would look like they recruited. Then they would save the jobs for their children and relatives. How can a whole police website crash and still be down till now?

A quick check on the official Twitter and Facebook pages of the Nigeria Police Force showed they were not addressing the issue on there or trying to calm the applicants in any way.

Some blogs in Nigeria receive visitors in excess of over 100,000 daily and still stay strong. It does not speak well that the website of the almighty Nigeria Police cannot withstand traffic for a single day.

oh come on, bring this post down. unfortunately people are sharing this false alarm. The url you are accessing there is completely wrong. http://www.npf.gov.ng not http://www.ngf.gov.ng