These UNILAG Engineering students built an Electric Car from scratch 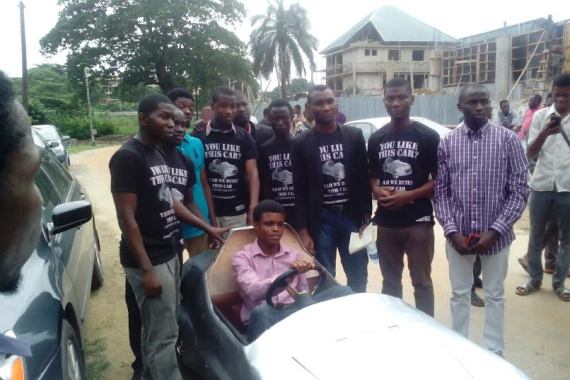 A group of Mechanical Engineering students from the University of Lagos have built an electric-powered car from scratch, using locally sourced materials.

The project, which began in 2014, was initiated by two engineering graduates (then undergrads), Olukoya Olusanya and Maduka Smart, who later enlisted the help of other mechanical engineering students. The result of the collaboration was a zero emission electric powered prototype vehicle called dubbed the DOVE P1.

The DOVE P1, which is made of a fibre glass body, weighs in at about 200kg and is capable of speeds of up to 35 km/h.

One would question the viability an electric car in a nation that struggles with reliable power supply, but team Olukoya Olusanya thinks otherwise. “Cars are going electric”, he said in an interview with CCTV News, “and I believe that in the next 15 years, more than half of all cars sold around the world will be either partially electric or fully electric”.

These are quite bold statements. All around the developed world, electric cars continue to struggle to get mass adoption. Their high cost, limited range do not help their cause much, even in developing nations where power is not a problem.

Nevertheless, Project Dove (as the team is called) remains confident that electric cars are the future. They have launched a crowdfunding campaign to raise $25,000. The idea is to replicate the technology at other Universities all around Nigeria. This will help sow the seed of early adoption in hope that one day, the country will see the benefits of depending less of natural resources like fuel.