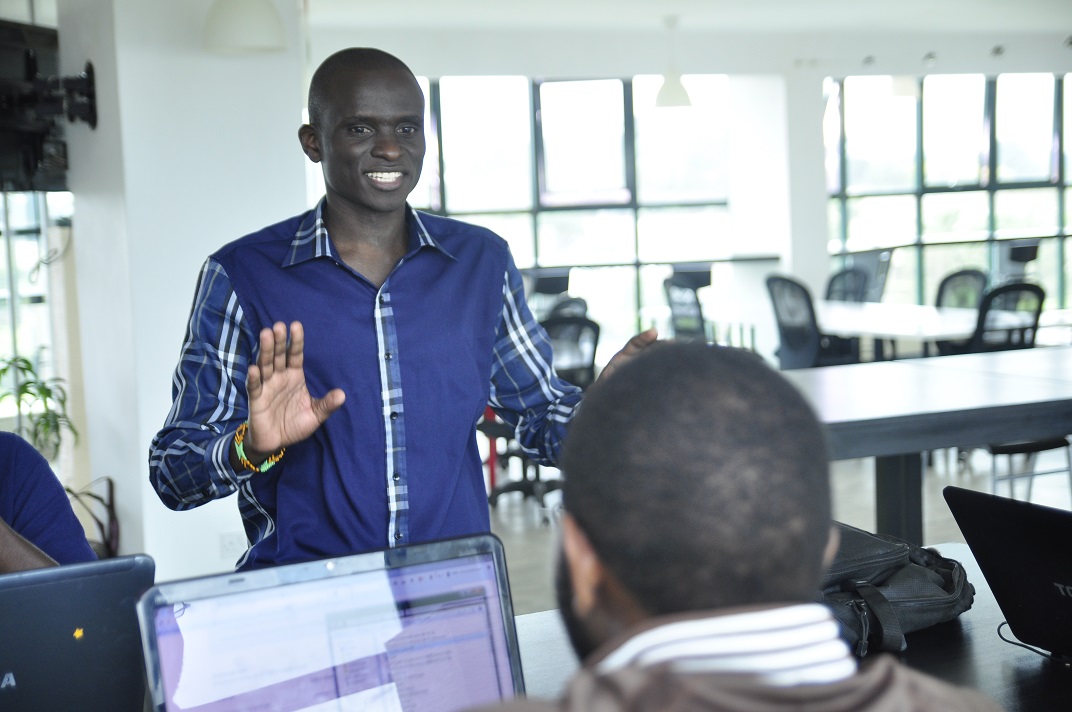 Frank Tamre is a man of many titles — Mentor, Coach, Founder, Applications Engineer, Performer, Developer, Photographer among many others. He describes himself as a “Design Engineer who believes in limitless boundaries of thought and ideas” on his website. When it comes to games, Football Manager series, Fifa 13 and Call of duty series are his cup of tea.

Frank co-founded Moringa School — one of the best coding schools in East Africa — with Audrey Cheng in 2014. The name was inspired by the fact that the Moringa oleifera, also known as the “tree of life”, is the most powerful health enhancing tree known to man.

TechPoint spent an afternoon with Frank and got to find out more about him and Moringa School.

Could you tell us a little about your professional and educational background?

I was in the University of Nairobi taking Economics, Political Science and French. I also did Accounting as well at Strathmore University. I dropped out of my Bachelor degree though, went  home (Mombasa) for a couple of months before telling my dad that I was not graduating. After a while I came back to Nairobi and went to Strathmore for my CPA’s as my dad had hoped that I would reform. A couple of months into it, I again dropped out. There was then a scholarship from World Bank at the time which I applied to though it was one in a thousand chances for me to be picked. I got accepted into a class of 25 people and I think I was like the only person without a technical background. The World Bank programme was something they were running in collaboration with m:lab — where we were taught mobile tech entrepreneurship — and a consortium of other people. It ran for 3 months so I decided to take it up and see where it would take me. At that time I remember I was super broke, I tried asking my dad for support but he had sort of given up on me. When he heard it had to do with computers, he was very sceptical about it. 3 weeks after starting the course, he called me and then sent me some money which I used to pay some of the ksh10,000 we were required to pay as a commitment fee for the programme.

From there I went to Pivot East where I pitched a startup. I went all the way to the finals in Uganda but did not win. I remember I was writing down lessons I was learning from the startups and more-so what investors were looking for. On the way back from Uganda I was deep in thought about what to do in the next phase of my  life as my only hope then, which was winning the grand prize of $10,000 at Pivot East, was crushed. I had been robbed of my laptop previously so now after coming back  I had to start from scratch. I used to go to m:lab because they had this desktop so I new I would have somewhere to work and I started teaching myself extra things.

In 2013 September iHub was having a bootcamp at Multimedia university in partnership with Intel. They had a hackathon in the afternoon and I remember one of their engineers who asked for my help. I eventually ended up at Intel part time and full-time after a while.

Why did you decide to drop out of school?

I got bored. I loved the classes but I didn’t see how I would apply what I was taught in class in real life situations/world. I enjoyed my political science classes, they were fascinating mostly because of the lecturer’s who were very engaging. Some of the things I learnt in my political science classes are my guiding principles here at Moringa school but I didn’t see how they were connecting. There was also the issue of long holidays where some of my classmates would make Kshs 15,000 in 3 months. That was a pay range that did not appeal to me. During that time I was making simple websites and I was making small money but it was more than what my classmate made. Over time I stopped thinking about the money.

What inspired the start of Moringa School? When did it start?

I met Audrey — my co-founder — last year while she was working at Savannah Fund moving around Kenya, Uganda, Tanzania and Rwanda. I was also moving around East Africa, one thing was clear — we were having all these training with Intel about application optimization but it reached a point we had to look at more experienced developers. The theory out there is that there are so many android developers but if you ask keenly you will not see these developers. My conversation with Audrey started when we met at m:lab, where I used to work from. We had both noticed an existing gap in the developer pool which we choose to collaborate and act upon. Thus Moringa School was born. We had our first class on January 12th 2015.

How easy is it to make business out of Moringa School? What is your current business model?

Our sources of income include fees from our students, consultancy for companies which we also involve our students to build such solutions. We charge an average of $2000 for school fees which covers a period of 4 months. Our students pay their fees in the abilities they know they can raise up to without stretching themselves. They don’t pay everything upfront. Our policy is when you start class, you stop thinking about money. If money is not available, its not available.

Who is your target market?

Anyone who has cleared high school , is proactive and open minded willing to be challenged and stretched.

Who makes up your faculty?

It’s mostly made up of a group of experienced software engineers such as Jacob Chencha (Tech Lead -iHub) who has a lot of experience and has gone through mlab, Samantha Meritt (UX Lead at Ihub). We also have different CTO’s of leading companies coming to deliver sessions.

What courses do you offer?What do they cover?

What challenges did you face setting up Moringa School and how did you overcome them?

I started Moringa School while still working at Intel so I had to work hard to ensure that the two did not conflict. I had a challenge splitting time so I had to shoot my organization to very high levels.

The other thing is I think I havent rested much since last year as I was always moving up and down doing Intel work to Moringa work and vice versa. I had to quit at Intel early this year

Where did you get the funds to start up?

It was actually our savings. We have not raised any money . We have organizations supporting us who contribute to our scholarship fund for our students.

In 2013, women held only 26 percent of computing jobs — a significant drop from 35 percent in 1990. What are your thoughts on gender equality in tech?

I have looked at the metrics of the people who apply for our programs and majority are men. There are women but the population in comparison to that of men is less. I know there are many initiatives geared at bringing in more women into tech, educate them because the say you educate a woman, you educate a whole society. Few apply, few get accepted though we do not have a leaning towards any gender. We are trying to convince ladies more to actually come into our programme but at most times most are not interested. We are now focusing on getting to the ladies earlier on before they come to to the point of choosing a career.

When is the best time for one to start learning coding?

When one can crawl. The world is getting to a stage where we get almost everything at the snap of a finger. I have a tablet that is cracked because I give kids to play with it. They can find Candy Crush and all these games yet they are very young. If they can understand how to use such technology at such a young age then they should also learn how to develop such technology.

Having spent most of your career around programmers, what would you say are the best kept secrets about programmers?

The good programmers really work hard. They have this work hard, play hard kind of lifestyle. All the good programmers have an ego that drives them. I see this and it was also recently pointed out to me. If someone is observing it for the first time they would term it as arrogance but I love how if you tell them that something cannot be done , they find drive in that. Most of them also have a hacking culture which is not very big in Africa.

What advice do you have for aspiring coders?

Join Moringa School. You should also know your skill and not on an elementary level; become a master at it. My belief with all these things we acquire is that they are orgarnic and for something organic to grow they need several things. One of these is community and an element of curiosity not the lifestyle of taking templates and tweeking them. Be 100% not 10% at several things.

We are those other coding schools on steroids.

There is no coding school in Africa with an average age of the co-founders as low as my co-founder and I.

Another things is that our curriculum has two interesting angles, one of Silicon Valley and one from here in Africa. The curriculum has been made in a unique way such that it is something that transits someone from the African education system that people are used to — all parts of Africa literally. If I sat down with a Nigerian right now and start telling stories of our teachers, we would totally relate. Beauty of that is that we understand here and have a connection with outside.

We are 100% data driven and  we keep our classes small.

What is Moringa School’s vision for the next 2-3 years?

We want to train developers numbering up to 1000 at the same time  focusing on quality. We will also have definitely expanded to other parts of Africa. We have had a 99% hiring rate for our graduands and we still want to maintain that.