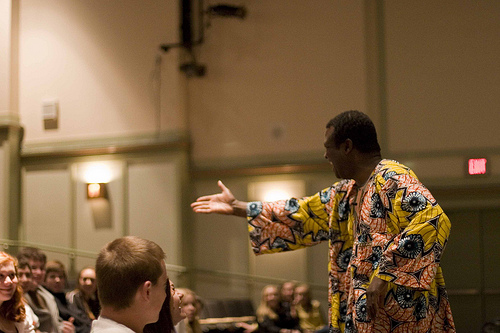 As with any blog post on race, I have to include a prelude.

This post is neither meant to be combative nor to apportion any blame. It is merely to add to a continuous conversation about diversity in technology. This post is MY OWN observation made on behalf of MYSELF. If any statement here can be interpreted in more than one way, assume the less combative way and / or ask me for clarification.

I actually wanted to write this over a year ago. However, I had been advised about the risk of branding myself as a diversity activist rather than being primarily known as a technology person. And most importantly, to avoid the risk of pissing off the people who control the tech media. But there is only so long you can postpone a question that pops up in your brain daily. As for the risk, we are in the business of risk taking.

Here is the issue

There are almost zero black faces speaking at the major tech startup conferences held in the US and Europe. And in the rare times they do pop up, e dey get k-leg (basically, it isn’t so straightforward).

Let’s check out the numbers of the most recent major/popular tech events (you can google for previous years).

What you will notice is that in the rare times the black (wo)man is on stage, it somehow manages not to be those who are primarily in the tech field but say, in entertainment or sports. When it’s a tech person, s/he is mostly talking about diversity.

Here is the thing. This past year, I have personally emailed a few of these organizers to highlight the anomaly (no, I will not mention them). I have also recommended speakers. The responses (if they come) have not been positive.

Why are Black Speakers Important?

When you make a decision based on historical data, you are bound to be biased by the data and produce a similar output. That becomes part of the data set and it continues…in a loop.

When tech black founders aren’t seen on stage (aka recognized as leaders in their field), fewer black kids would believe they have a future to excel in that field. The less black kids go into tech, the lower the chance the situation can change. Of course, that bias does not only influence the future black kids, it affects those looking for a co-founder, those looking for whom to fund etc.

I never blame those that pattern match; it is simply human nature.

Let me confess, if I have a few seconds to make a decision, I would not choose someone that looks like Jamie Oliver to make my jollof rice (don’t read the comments :)).

While it can be argued that food, music and some sports are cultural and therefore could have an inherent racial bias, tech isn’t.

5 years ago, I asked for the renowned black founders. While, there has been a lot of progress in that field since then, it has been against the odds.

The about pages and the speaker list of the tech conferences would have more influence on getting more diverse people into the technology field than any other thing I can think of. I know from first hand experience.

Here are some Black Founders and Technologists that should not be overlooked.

First, I have to apologize for putting their names here. Because there is this taint that comes from being used as an example. When they get justifiable noticed, it becomes, “oh, they are there to fill in a quota”. But that could not be further from the truth. These folks deserve to be on the largest stages and are needed to correct the flawed data that say none of the best  happen not to be black.

There are many more. However, let me not be accused of being biased towards Nigerians home and abroad. But Charity begins at home

Aston Motes was the first employee at Dropbox outside the founders. I do not recollect him being on any stage. He cannot be seen as a quota at any conference. And no, he is not a diversity expert.

Juliana Rotich of the BRCK team should be on every stage possible. BRCK is globally genius and should get much more love than it does.

Tony Gauda a TC Disrupt Finalist build Bitcasa, a Dropbox alternative. He is very qualified to be on any stage talking tech. And so is Anthony Skinner who was the CTO of Moz for many years, especially during their major technology transition. Louise, Kalam and Courtland are some of the black YC alums that are doing stuff as good as those speaking on any stage. So the question of affirmative action does not arise.

BTW, it took me 3 years to know that 2 Nigerian brothers founded a YC coy as far back as 2012. They just never happened to be on any major stage

Like I said above, I actually emailed a tech publication about their speaker lineup after one of their writeups criticizing the tech companies who had released their diversity reports. I didn’t get a response.

I am certain that there isn’t any conspiracy to deny black people in tech stage presence but it is quite easy to take certain things for granted if you are not checking yourself. One example I use to show there is no deliberate plan by white people is one of the quietly best podcasts on tech around, DRT. Only two black people out of the 104 guests so far and the first was number 99. Well, the host is a black british designer ?

So how do we solve this?

To Affirm or Not to Affirm?

The biggest criticism of affirmative action is that it gives the impression that those who get in are not there based on their competence. Anyone who knows they are worthy on a level playing ground hates it. It is why I apologise to those people I named above. It would seem that they ordinarily would not qualify. That could not be further from the truth based on pedigree and results.

To me, I have started trying to see affirmative action as being more thorough and conscious. Instead of doing a quick Googling to see who to invite to the next conference, spend more time, go more further to find different types of people that QUALIFY to be on your stage. It is that simple!

I also think having a more diverse staff/speaker selectors at the disposal of those organizing tech events would help. People are quick to go for what and whom they know.

Though I fully respect and understand the need for minority focused events, I do not think it alone can help. We belong in the mainstream.

What finally triggered publishing this post (I wrote most of it a month ago) was the latest speaker announced for TC Disrupt London. When I finalized the draft for this post, they had 0 black people and I noted that there was still a chance to rectify it.

Then they chose Henry of Arsenal.

PS: I hope because of this, I’m not punished covertly or overtly by the conference organizers I appear to criticize. This is to keep an important conversation going with good intention.

I am a founder of Fonebase Labs, a Nigerian technology company. Our products are Fonenode – a telephony API, Callbase , a virtual contact center and WriteRack the best way to tweetstorm. Feel free to holla at me (ositanwoye@gmail) if need be