Commemorating 75 years of Nigerian media: ‘Voices Beyond the Newsroom’ book set for launch 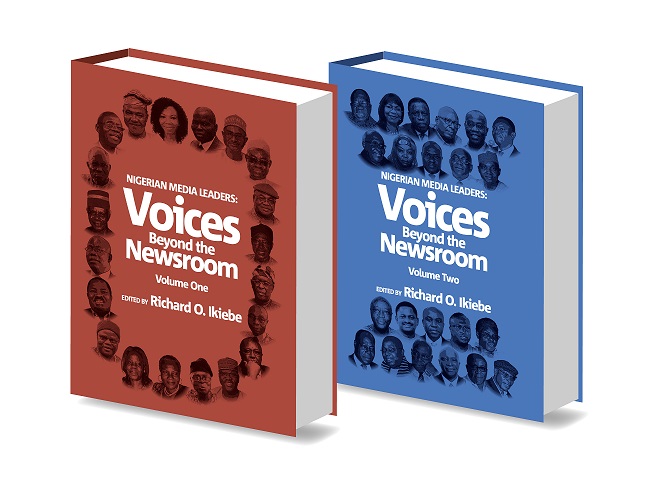 The contributions, challenges and exploits of Nigerian media leaders in the last 75 years would be the focus as they gather at the formal launch of an epochal study of the Nigerian media on September 22 at the Eko Hotel & Suites, Lagos.

Nigerian Media Leaders: Voices Beyond the Newsroom features conversations with more than 80 media leaders across print, broadcast and the academia.  Media scholar, Richard Ikiebe, of the School of Media and Communication, Pan Atlantic University, Lagos edited the four-volume work.

The research is a collaboration between the Nigerian Guild of Editors and the School of Media and Communication, Pan Atlantic University.

Ikiebe said he was motivated to undertake the work to fill the gaps in the study of Nigerian journalism since the pioneering work of Alfred Omu’s Press and Politics in Nigeria, 1880-1937 published in 1978.  “It became imperative as many of the pioneers have passed on without sharing their experiences and know-how,” he added.

The book represents a significant contribution to the knowledge of the media. It consists of interviews with 75 media players in the Nigerian print and broadcast media, spanning 1935 to 2010, and covers various themes of media leadership and management, circulation and distribution, readership, changing media landscape, media and military, as well as the effects of social media and changing demographic patterns.

Ikiebe who serves as a Senior Fellow and Director of the Centre for Leadership in Journalism at the PAU also serves as Vice Chairman and Director of Cornerstone Insurance Plc., In the late 1970s and 80s, he served as a Reporter and Staff Writer of the Daily Times and Newswatch Magazine.  He also served in Government as Special Adviser in the Presidency and Ministry of Information under different administrations.