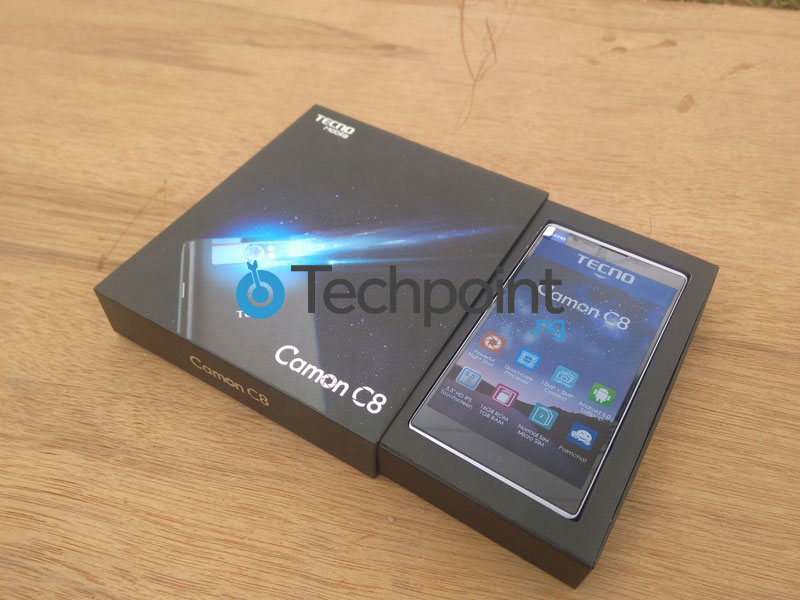 Similar to the Tecno Boom range, which has its primary focus on music, the Tecno Camon C8 is the pioneer in a range of camera-centric smartphones that Tecno is introducing to the market.

Tecno’s intention is to bring premium phone camera quality, that can rival big name flagships, at very affordable prices for the average consumer. How has Tecno managed to pull this off? We will find out in due course. But first, let us unbox the device.

Tecno has been killing it with their boxing lately. The Tecno Camon C8 is no exception. You have to slide out from the right edge of the box (as above) to reveal the device.

Behind the device, top centre, you will find the 13MP shooter

Power button above, shutter button below

While the volume controls are to the left

You fill find the 3.5mm earphone jack at the top

And theUSB/Charging port at the bottom

As you might have observed, the Tecno Camon C8 supports both micro and regular SIMs

Further into the other contents of the box …

You will find the usual suspects …

That is pretty much all there is to unboxing the Tecno Camon C8.

Not in an uncomfortable or annoying way, just an observation. If you are used to slimmer phones, it might take some getting used to.

I can already tell is a super win. When you take a moderately clocked 1.3 GHz processor, with only 4 cores, and combine it with a 3000 mAh battery, you are bound to get favourable results in the power consumption department. I only find myself wishing Tecno had paired them with a less power hungry AMOLED display. Nevertheless, I expect to experience pretty decent battery life on the Tecno Camon C8.

I having taken any shots yet – I only just unboxed the device – but judging by the specs alone, I find a few things interesting.

The above is a screenshot from an inisder training manual we happened to get our hands on. Tecno claims that the Tecno Camon C8 camera features an f/2.0 aperture. In lay man terms, this represents the amount of light that the lens can let in. The smaller the f-number, the more light the lens can let in.

For perspective the iPhone 6 has a f/2.2 aperture rating. Which means that the Tecno Camon C8 camera should have the better lowlight performance of the 2, at least on paper.

Another screenshot for the training manual

Also, I find it interesting that the Tecno Camon C8 camera also features dual-LED flash, which will also go a long way in improving lowlight shots.  This something that even popular flagships from the likes of Samsung and Apple don’t feature.

For now, these highlights and observations are just paper-based. I plan to put them to the test in real-life situations so, watch this space.

This is probably that part you have been waiting for. According to our source, the Tecno Camon C8 will retail for between N25,000 and N30,000. For all the impressive features it packs, it seems like an awesome bargain. Especially when you consider that the some competing flagships, with equal camera performance (at least on paper) cost 5 to 6 times as much as that.

The Tecno Camon C8 is set to begin retail sometime by the end of August. We should have our full review up before then.

haha! I like how the ‘Tecno’ on the back cover is made very faint. Would make a brother better proud of the device.

Ha na wa for you o. You sound vain. The phone is good, you are impressed, but ur problem is the logo. I tire for ppl

hehe! Issit my fault? If the camera really impresses me, I’ld be proud sha.

Yo! The camera is great. Asin greatest camera Tecno has produced so far.

If you like the phone, why can’t you be proud of the logo???

Lmao, you no well o. Saw a ridiculously tall lady holding it just yesterday, the back cover looks like the Note 3/4 back or phantom Z. I don’t like it , No i love it.

haha! You see… we are together in this.

lmao, you re such a clown….

bro what were you expecting, they themselves can’t dare to make it obvious

not that sleek tho

how will you call this sleek, seems you’ve never used an iPhone 6

I have, so for me to say its sleek means its sleek

It is supper sleek. You wouldn’t believe the splendid feel when you handle it.

Damn this phone is too f*$kn sexy. Its now affordable and the specs are off the hook

can’t wait to have this phone

the two of you are mumu of the highest order

this phone is what we have been clamouring for

shey you be human being wey go make dem include you for we ni?? abeg, na we get am

you must really be high on some cheap drug sneh oshii

just stumbled upon this post and i must say, am really impressed for a time well spent to construct this post.. thumbs up to the admin

Yh yh. big shout out to the admin

The back of the phone looks grip-friendly so I’m sure it won’t easily slip off the hand. Very good initiative.

You know this! Metal frame on the side, and somewhat leather back cover. Yet, light. I’ve not handled a tecno phone fresher

I thought this was tecno’s phone of the year but apparently, they have more in store for us.

I read about another phone that they will release in a few months time, Rumor has it the phone will have 3 GB

I think I’m going to help them open their store the day they release this phone.

Awesome! Does it come in white?

Yes it does, I saw a picture of the white one online

First impression lasts longer. Am in love with this.

The first is quite nice

All day any day, this is the real deal

The affordability of this mobile makes is somewhat unique.

So beautifully designed. Got the wow factor

What a cameracentric phone.! And it is fucking affordable mehn

lol, cameracentric!! I love the word

This device would definitely boost tecno’s status in the market.!!

iPhone, Samsung should watch their back cos tecno is coming for them mehn with this

I agree, the competition is getting tough

Looking good I must say!

I watched the unboxing online and I really liked the user interface.