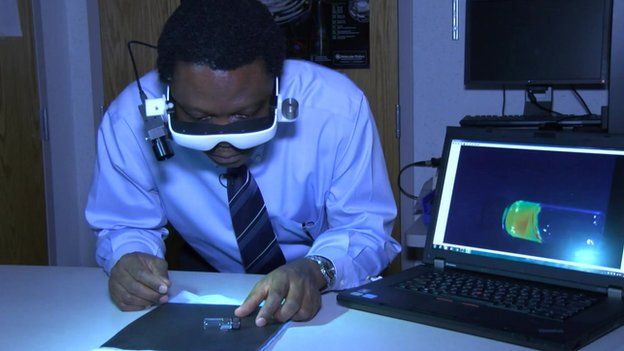 Dr Samuel Achilefu is the Director Optical Radiology  at the Washington University in St. Louis. With the help of a team of scientists, he has invented a pair of high-tech goggles which helps surgeons ‘see’ cancerous cells.

How the Cancer-seeing goggles work

In trying to get rid of cancer tumours, Surgeons often face the challenge of having to remove excess tissue around the tumour, but not necessarily getting all the cancerous tissue out. This usually necessitates to repeat surgeries, in a bid to get out all the cancerous tumours missed earlier.

However, with Achilefu’s technology, are able to see precisely which tissues to cut out, all in one operation. First, they inject a specially-formulated peptide dye which can seek, and attach itself to, cancerous cells. This dye has fluorescent capabilities that make it glow at a wavelength not visible to the human eye. This is where the cancer-seeing goggles come in.

The goggles have a sensor place in them which, according to Achilefu, “captures fluorescence from the dye lodged in cancer tissue and projects the image into the surgeon’s field of view”.

This creates an augmented reality that allows the surgeons to see cancer cells glowing, providing real-time guidance during surgery.

The obvious implications of such ground-breaking technology include reduced cost and size (in terms of tissue wastage) of surgery operations, in the not-to-distant future. Achifelu’s cancer-seeing goggles have been undergoing testing for over a year now. So far the technology has been used successfully in about 27 operations involving skin, liver and breast cancer patients. Nevertheless, it is a technology (way ahead of its time) which will require a lot more testing -particularly in other cancer cases –  before it can be considered for routine use.

“My final goal is really to make it a routine system that we can use in all hospitals”, said Achifelu in an interview with Al Jazeera. “For brain surgery for example, where you do not have the luxury of taking a lot a lot of tissue, and you have to be highly specific. In that particular case, these goggles would be a live saver. The goal is to be able to detect very small cells but the current imaging systems are not capable of doing that”.

Achifelu’s efforts have not gone unnoticed, as he is a recent recipient of the St. Louis Award – an award that recognizes outstanding residents of the Washington University in St. Louis.

Achilefu is an alumnus of world-renowned Oxford University, where he completed his Postdoctoral Fellowship (following PhD at the University of Nancy, France) in 1993, before moving to the US that same year. He lives in the St. Louis area with his wife and two teenage children.