Innovate with C#: Microsoft ADC set to host programmers and developers in Africa 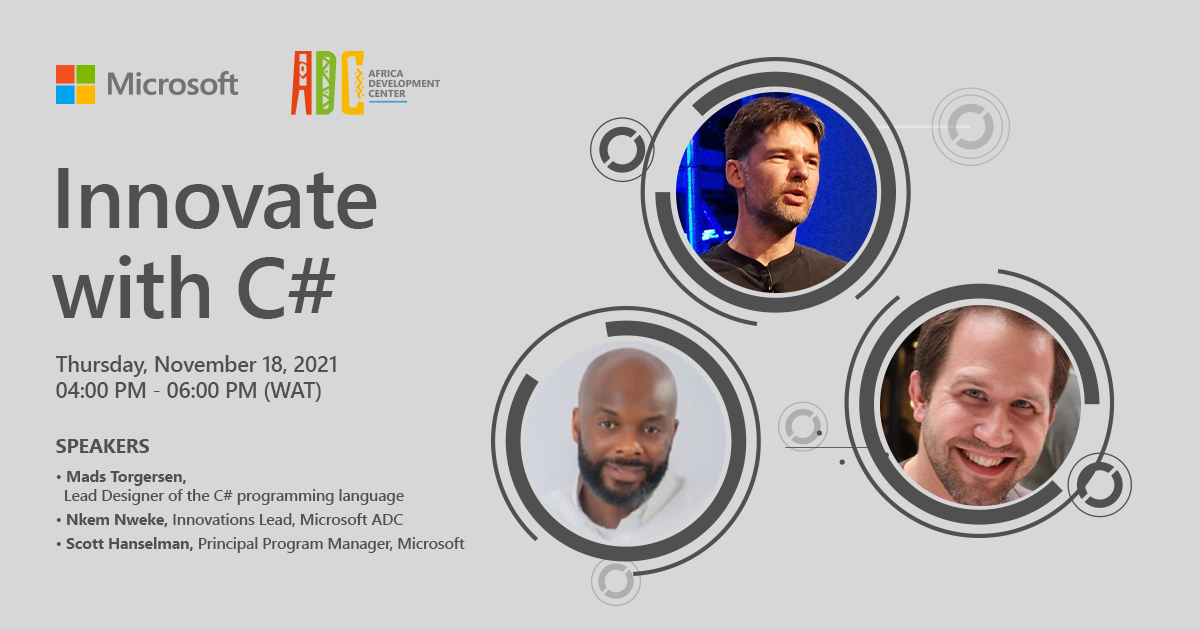 The innovate with C# event is aimed at helping C# developers, programmers and advocates broaden their scope with the new update created and interact more with the programming language whilst exposing them to a wider range of opportunities within the ecosystem.

Microsoft Africa Development Center (Microsoft ADC), the engineering center for Microsoft is set to kick off its first skill-based user group event on the 18th of November, 2021 tagged ‘Innovate with C#‘- an expert hands- on event for developers, engineers and programmers in Africa who build programs and applications with C# (The most popular among Microsoft’s stack of languages that provides a broad spectrum of components covering business-oriented to system-oriented projects that is commonly used in the building of Website Applications, Windows Applications and Gaming).

Speaking on Innovate with C# Gafar Lawal, Managing Director, Microsoft ADC for Nigeria noted, “Microsoft is committed to upskilling tech talent in Africa and especially in Nigeria. At Microsoft ADC, we are committed to elevating talent in Africa at every opportunity we get, considering the impressive level of innovation and creativity arising from the continent with the use of technology. The purpose of Innovate with the C# event is to interact and engage with developers who use the programming language. Our goal is to widen the knowledge and understanding of our community with this programme, answering possible questions participants might have on C# as well as helping them to gain mastery of the programming language. The program is also meant to help developers network with other developers as against future collaborations.”

Speaking further about the innovate with C# event, Mads Torgersen, Lead Designer of C# Programming Language and Program Manager at Microsoft, noted “It’s very exciting to see initiatives and events like this being organized to engage the C# Community across Africa. I am thrilled to be speaking about C# 10 at the “Innovate with C#” event by the Microsoft Africa Development Centre and to learn from the African developer community throughout the event.”

Innovate with C# is a free virtual event for developers and programmers to discuss the new update created and creating room for the expansion of C# knowledge base whilst gaining access to learn from field experts. Registration for the event is open to all C# Developers, Programmers, and Advocates in West Africa and Kenya, and can be done by clicking on this link https://aka.ms/InnovateWithCsharp