#ENDSARS: Nigerian government’s strongarm tactics, crypto adoption, and the power of the Internet 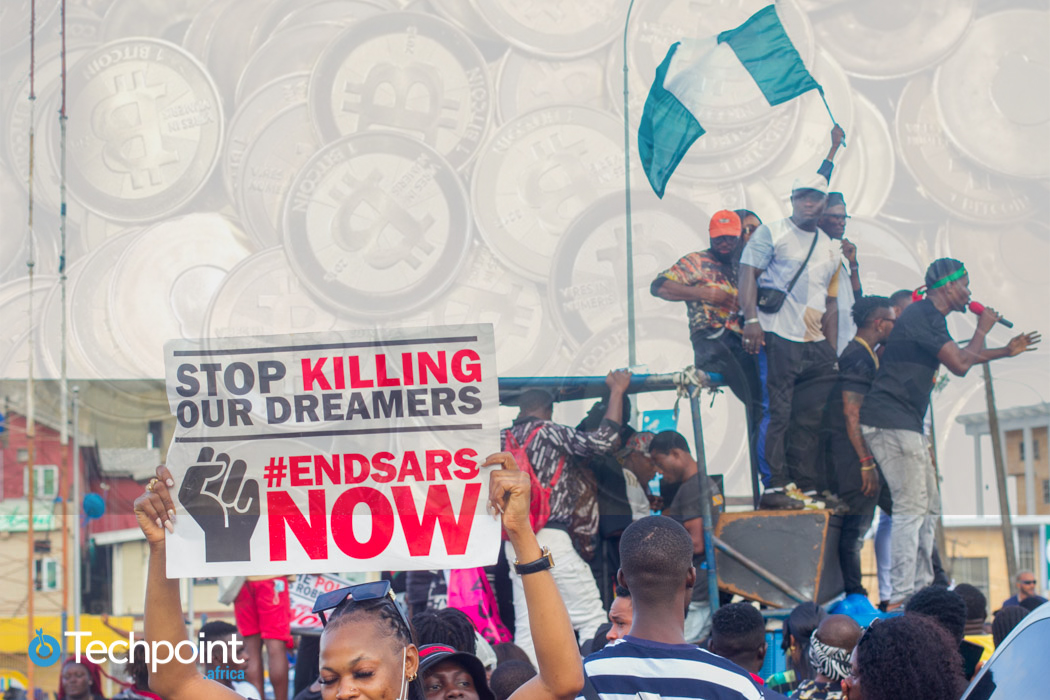 As most Nigerian youth take to the streets to fight against police brutality in Nigeria, there have been allegations that the Central Bank of Nigeria (CBN) clamped down on platforms opened to fund the peaceful protests.

Based on past and current events, this could inadvertently drive the adoption of cryptocurrency.

Since the protests began on October 4, 2020, Flutterwave donated ₦2 million and by October 9, members of the public began donating using the link the company provided. Activist organisations like the Feminist Coalition Nigeria also opened accounts for donations, a move that was well received by the public.

On October 13, the CBN allegedly placed pressure on Flutterwave — claiming they were sponsoring terrorism — and the Feminist Coalition movement which claimed their accounts had been disabled.

However, Flutterwave has since denied being called in for questioning by the CBN, claiming that the donation link was only undergoing maintenance.

According to now-debunked reports from Nairametrics, ThisDay, and Arise, Mr Tunde Lemo, former Deputy Governor of the CBN and Chairman of Flutterwave, allegedly said he ordered the shutdown of the link because “a few bad eggs were using it to move money”.

While this could be the case, the timing coincides with the alleged disabling of the Feminist Coalition’s bank account. However, the activist organisation has since deleted the tweet, and donations have surged with the use of Bitcoin. It has since put up a crypto wallet and the funds have not stopped coming in.

Products like Sendcash are being used to send bitcoins while people receive it in naira. Crypto platforms like Bundle have also set up wallets that people can send donations to.

The #EndSARS movement and the crypto surge

Nigeria’s economic struggles in 2020 have seen the massive adoption of crypto platforms; Nigeria has the highest adoption rate in sub-Saharan Africa, and one of the highest rates in the world.

According to Buchi Okoro, CEO of Quidax Exchange, the government has inadvertently pushed Nigerians towards cryptocurrencies by trying to block standard banking channels.

“We’ve seen this happen before, governments tried to control everything, and the people reacted by finding a route where no one can hold sway. This time around, it’s for a good cause,” he says.

The strict control of citizens has been a recurrent feature in most African countries. Governments have tried to shut down dissenting voices by ordering curfews, shutting down the Internet and social media, and other human rights violations.

In Nigeria, there have been reports of protesters being shot and facing violent conducts from some members of the police force. Nonetheless, the power of social media has allowed their voices to be heard, and the funds from donations have helped with feeding and the treatment of injured protesters.

According to Okoro, people with a bitcoin wallet will now find more use for it, those without a wallet will download one, while the uninformed will learn about it even if they don’t download a wallet.

On the possibility of the decentralised channel being restricted, Okoro insists that for that to happen the Nigerian government might have to shut down the Internet and the banking system.

“We’re patiently waiting to see if that will happen or not,” he says.

Though Nigeria has little to no record of Internet shutdowns, it is a common practice during periods of unrest and elections in countries like Ethiopia, Egypt, Cameroon, Togo and Benin.

Shutdowns don’t have to be total and over the years, they have taken on various forms.

Some parts of the Internet might be down, Internet speeds might be reduced, or social media and instant messaging apps could be targeted.

Given Nigeria’s history of rights infringements, its Social Media Bill that is still very much alive despite widespread criticism, the possibility of a shutdown of social media in Nigeria is not far-fetched.

However, Okoro maintains that the most important factor to realise the objectives of the protest will not be disruptive technologies, but simple tools like our voices and legs.

“Bitcoin will be no good if people are not walking on the streets and if their messages are not being heard on every platform available. As we retweet on social media, we also use word-of-mouth to spread the message,” he adds. https://zp-pdl.com/emergency-payday-loans.php https://www.zp-pdl.com https://zp-pdl.com/get-a-next-business-day-payday-loan.php займ на банковскую карту без отказавзять займ в спбзайм онлайн по всей россии