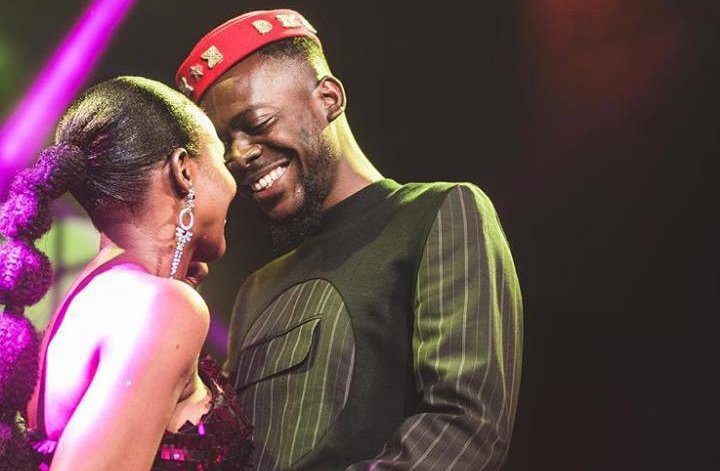 On Wednesday this week, we got news that two of Nigeria’s most popular artistes Simi and Adekunle Gold tied the knot in a secret ceremony with “only” 300 people in attendance. We didn’t even know they were engaged.

We also heard that phones were seized to prevent pictures and videos from leaking, but after waiting for so long, we saw these;

No wonder that Simi and Adekunles Gold “acting” in their “No forget” video was so real. It was no acting.

Adekunle Gold and Simi have come a long way. Wishing them an exciting and a fulfilling marriage. pic.twitter.com/z3X0Fv2Ihh

Lesson learnt so far from the #SimiGold
* There are still girls that wants to grow with you only if you are a prospect
* Open relationship doesn't last, keep things tight till the very last end
* Pre wedding pictures isn't a necessity
* Wedding is not a concert

There is something i want to bring out from #SimiGold wedding, they are well to do but they invited only 300 guests to their wedding. So my brother my sister, don't wait to save the money to call your entire village people and later go bankrupt, know your limit and spend wisely.

Girls need to learn from Simi. She’s been dating Adekunle Gold for a while but was still a rumor till they had a kiss on stage. But a yahoo boy will say just “hi” to you, you have changed your name to Mz cash money, Aya young dollar etc… you go dey alright 😂😂

Let’s talk about the size of the wedding

Mostly because many people believed he and Simi were an item.

#Falz they don Marry
your Wife oooo
Eyaa. #Simi why??😰😰

Then he tweeted this;

Me trying to understand which suspense is more worse either Asuu announcement 2days ago or Awaiting Simi and AG wedding Pictures cos Refesh button sef is tired😩#SimiGold #Simi #AdekunleGold pic.twitter.com/lyXJuxQX9p

Pastor: Will you Adekunle Gold take Simi as your beloved ?

P :=Will you Simi take AG as your beloved husband ?

Simi and Adekunle Gold wedding is not just love but xtry. Both artist have same valence electron which make the union easily oxidized, wedding so spontaneous & product invisible until it is now in a polymer state. I pray d rxn won't be reversible as falz is another strong agent😂 pic.twitter.com/6BlxZKzifs

The couple is yet to publish any post relating to their wedding. Nice. Read on for other trending topics on social media this week.

The trials of Tolu Ogunlesi

BOMBSHELL: LISTEN and SHARE as the DG of the @MBuhari campaign @ChibuikeAmaechi, destroys Buhari. “The President does not listen to anybody. Does he even read”-Rotimi Amaechi. LISTEN and RETWEET #RenosDarts pic.twitter.com/3VKFzr8LPC

BOMBSHELL: LISTEN and SHARE Part 2 #AmaechiTapes. Rotimi @ChibuikeAmaechi, DG of @MBuhari’s campaign said “This country can never change, I swear. The only way this country can change is in a situation where everybody is killed. This country is going nowhere.” LISTEN and RETWEET pic.twitter.com/6t01BgqiHD

Yesterday, I set up the @NGRPresident. I knew if I released the full #AmaechiTapes, they’d say it was fake. Now that @ToluOgunlesi admitted it is actually Amaechi, but from 2014, here is the rest of Part 1 proving that @AsoRock lied. Part 2 is coming shortly. LISTEN and SHARE pic.twitter.com/e3WiSyPIdX

BOMBSHELL: #AmaechiTapes Part 3. Yesterday as @MBuhari inaugurated his campaign, @ChibuikeAmaechi told Nigerians to reject @OfficialPDPNig. Now, LISTEN & SHARE as Amaechi tells you what he really thinks about you, the Nigerian people. They call you COWARDS. LISTEN and RETWEET pic.twitter.com/yHcDeeR1od

BOMBSHELL: #AmaechiTapes Part 4 LISTEN and SHARE as Rotimi @ChibuikeAmaechi confesses and complains of how @OfficialAPCNg illegally deducts from his salary contradicting @MBuhari’s claim that government money is not being used to fund his campaign. LISTEN, COMMENT and RETWEET pic.twitter.com/iN3lmC224D

Tolu Ogunlesi the king of threads, the pride of Buharists, the poster boy of Buhari media team has been brutalised. Just like Osinbajo was defeated at VP debate, Tolu deleted his thread on #AmaechiTapes, swallowed his words and pride. No more #DubaiStrategy rants. LOL! pic.twitter.com/5UarALba3t

This week, Tolu Ogunlesi, President Buhari’s Special Assistant on Digital/New Media reacted to the audio tapes, claiming they were doctored.

You haven’t heard the last of the Amaechi ‘tapes’. We are dealing with Principalities & Powers, who‘ll go to any lengths to fight dirty.

1. One of the fraudulently edited clips: https://t.co/sWZDAWVBd5

2. The original clip below. See how they edited out the ‘Corruption’ context pic.twitter.com/x0x3MAckFL

It used to be one lie per week, now it is one lie per day. @toluogunlesi and co. Eku Ise Oluwa o!

Tolu Ogunlesi came lying to us that the Audio was in 2014 and that Amaechi was referring to GEJ. Same Ogunlesi whose office is at the Federal Secretariat, rarely knows what’s happening in the Villa except told by Bashir, is here lying. Anyway, he belongs to the family of liars!

So @toluogunlesi did a WHOLE thread abusing Reno #AmaechiTapes were about Hero GEJ?

In his bitterness he even dragged @DemolaRewaju into the thread.

Tolu is a Presidential Media aide. He now has evidence that Amaechi was subbing PMB. Yet his fake thread has not been deleted. 🙃 pic.twitter.com/mq7sdR9Pxo

Tolu Ogunlesi's descent from highly-regarded, award-winning journalist to South West Abusidiqu has been painful to observe.

A rare picture of reno omokri and tolu ogunlesi pic.twitter.com/VYRu5HXuWn

During the APC gubernatorial campaign flag-off in Lagos on Tuesday this week, a fight broke out, leading to injury and reported death of a couple of people in attendance.

The part of this story that went viral was Mc Oluomo, popular Lagos tout being stabbed in the neck.

Then this video surfaced on social media

VIDEO: MC Olu Omo telling his opponents to get more GUNS because his own gang are ready for 2019 elections. This was few days before he was severely stabbed at APC Lagos campaign flag off. (WATCH) pic.twitter.com/IpKwKFyKY1

Its surprising that a whole MC Oluomo doesn't have anti-knife or anti-metal.

Rumours that he died

After slapping Agbero and MC Oluomo is not picking call😹 pic.twitter.com/sfwSbK2BCB

The guy that stabbed MC Oluomo…for the rest of his life 👇 pic.twitter.com/bKI7EiVEVb

MC Oluomo to be flown abroad for proper medical treatment by a specialist- Punch.

Between the two of them who is actually a threat to public peace?

Until we reform the Nigeria Police Force any talk about changing Nigeria is mere rhetoric.

Mc Oluomo Is A Citizen Of The United States Of America?

See Why You Shouldn't Kill Yourself Over All These Politicians

MC Oluomo was stabbed, he no get juju, he is just an ordinary guy using GBANKO.#Dazzol

This week, ace Nigerian superstar Davido took to Twitter to conduct an Ask Me Anything session with his fans.

He got some very interesting questions, here are a few of them;

#Askdavido can u throw more light on this free style ? https://t.co/vqohtm0mgf

Fun fact : I HAVE NEVER COLLECTED A DIME FROM ANY OF MY ARTIST RVEN THO THEY R UNDER CONTRACT.. I don’t need the money I’d rather them use it to invest in themselves https://t.co/oa4moWkom7

She’s working on her cooking show and doesn’t wanna get on social media for now … social media is not life! https://t.co/3kkU8P7zXV

Girls: Can i be your 3rd Baby Mama?