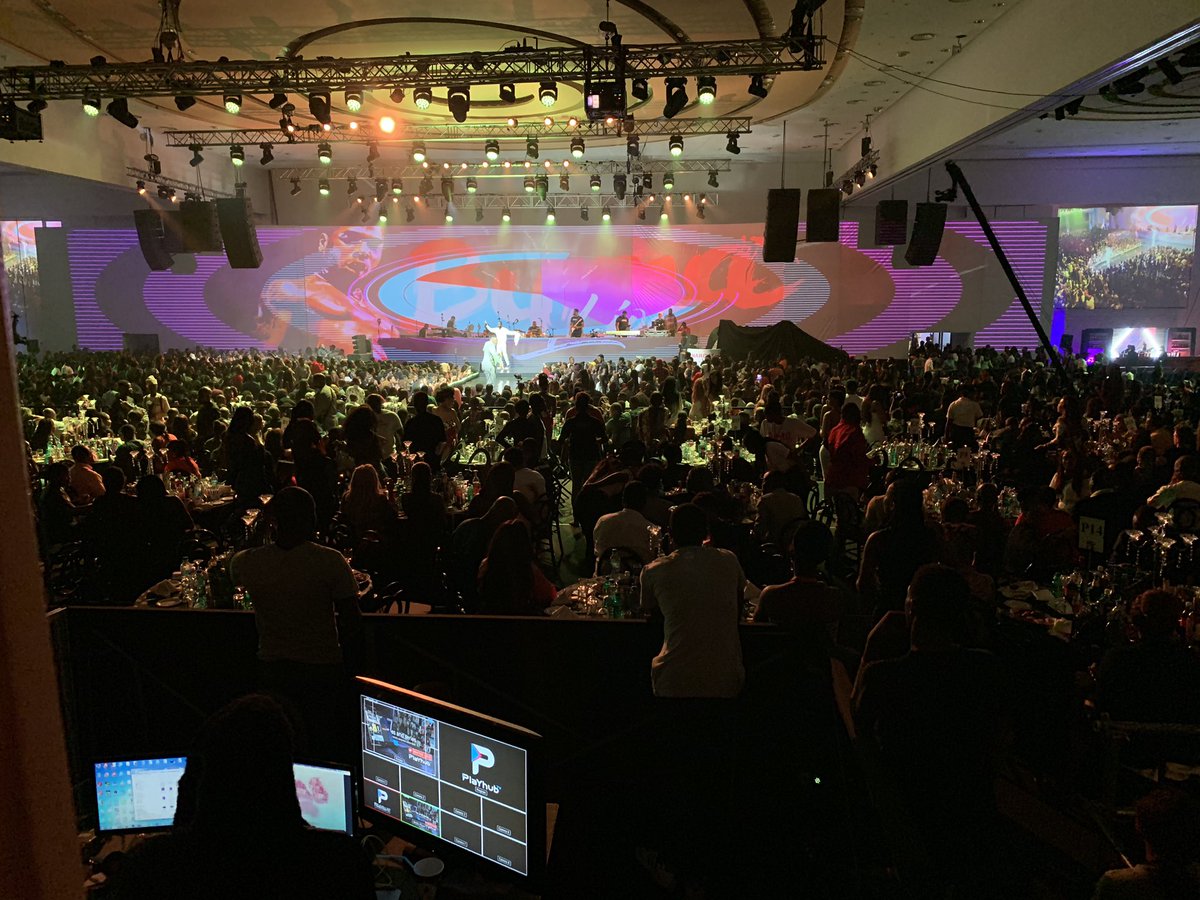 Tuesday this week was Christmas day, making this entire week all about joy, kindness and unlimited enjoyment. There were a couple of major concerts in Lagos as it is the norm and every fun place was packed full.

On Christmas day, Techpoint released a video to wish all our friends and readers a happy holiday. Watch it below.

They say we can't sing, but we did it anyway. Because we are happy.

Yeah, we are happy; the holidays are here again. #MerryChristmas and a happy New Year from Techpoint. pic.twitter.com/mmLnPnyUxm

Fun fact about the video, we practised for three weeks and we’re glad it turned out okay. Turns out the Nigerian President Buhari and Vice President Osinbajo came through too but I doubt they had much practice;

A joyous Merry Christmas wish to you from us. ❤️🎅🌲 #MerryChristmas pic.twitter.com/yxkvGx6wVM

A time to rejoice, a time to celebrate, a time to give and show love. Merry Christmas to you and your household. #YelloChristmas #MerryChristmas pic.twitter.com/7JHLG6seEu

My Queen and I wish you a Merry Christmas 🎄#MrAndMrsOluwarufus#MrAndMrsOyemade

To our gallant Troops who are steadily holding it down in the volatile NE region of Nigeria so we all can enjoy your Xmas peacefully in our homes, we say Thank You & #MerryChristmas ….& to the ones who gave their lives for the cause, may God comfort their families .. 🙏🙏🙏 pic.twitter.com/xx0faFmHjT

This Christmas is the dullest i have experienced in Nigeria. Abi something has changed in our constitution that am not aware of ni?

Merry Christmas 🎄
Do you have any complaints about your contact with any police officer in Nigeria?
Call 08057000001-2 or SMS/WhatsApp 08057000003. @PoliceNG_PCRRU is available 24/7, Our quick response will put a smile on your face#BailisFree #NoToImpunity #PoliceAccountability pic.twitter.com/e0BhVv0Acm

People saying Happy Christmas are the problems we have in Nigeria 💔

Burna Boy’s Lagos concert tagged Burna Live held on Wednesday, December 26. His fans had anticipated the show as soon as the ace musician announced the the date and venue of the concert earlier in November.

His fans showed up en masse to watch him and other musicians perform their favourite songs. If you missed it, read this thread of the show’s highlights.

Okay I made #BurnaLive videos cos I love all of you. It will be a thread. @Rouvafe requested so don’t say nobody sent me. pic.twitter.com/S6kKhrvEGn

Here are a few reactions to everything that went down at the concert.

Don't matter how much I love the music, when you say 7pm and you don't show till 2am the next morning, it kills the vibe and is just plain disrespectful. #BurnaLive

It’s 2am, nobody is performing, Mc’s have gone backstage, we’re here looking at ourselves. Damini Ogulu you did not try at all. #BURNALIVE

The organizers of this #burnaboylive should be ashamed of themselves. So much money for a ticket and hundreds of people cannot enter. It’s 1:19am. 🤦🏽‍♂️

When if did begin…

Burna boy’s concert yesterday was the highlight of my December. Thank you @Sleekjamzrecord #burnaboylive pic.twitter.com/1mYkmtkIad

Show started by 2 am…but it was worth it. @burnaboy you be MAN! #BurnaDay #burnaboylive

If anyone with regular/acceptance tag is putting up videos like they are enjoying. It is a lie. We are suffering here o.
This concert is really for VIP/VVIP people. #BURNALIVE

Lmao please dears, this is the #Burnalive those ones tweeting from their noses won't show you pic.twitter.com/bN8s0JsxzR

Drama at the venue

She knows why he has not come out to perform #BurnaLive pic.twitter.com/7gmsDUWWGn

Davido: if you see the way people dey vex say you never even show your face for your own concert

Some people will be viewing #BurnaLive through their twitter like us… But dey will be twitting as if dey are there
We are watching you through HD camera o #burnaboylive pic.twitter.com/hfZNzPygN9

Still on Christmas enjoyment, Davido held his much anticipated concert in partnership with Infinix yesterday, at Eko Atlantic City. The concert featured many A-list artistes and some drama in between.

Davido only had 12 days to sell out 15,000 tickets for his City of Davido concert at Eko Atlantic, and he has reportedly done so. He printed 15,000 tickets. The venue can be structured to contain 10,000 fans or as much as 40,000 as the Artist pleases. #InfinixDavidoLiveInConcert pic.twitter.com/BRxGBWv52E

Highlights of the concert

This concert was too hyped. Nothing is happening here. Can they do better #infinixdavidoliveinconcert

Zlatan Ibile, Naira Marley and Lil Kesh to the rescue!

Security issues at the concert

the entrance isn't organised.. the pushing was crazy plus theft…most people won't be tweeting tonight, alot of phones stolen…if you can survive the entrance…A big Congratulations to you…I am a Survivor💪 #InfinixDavidoLiveInConcert

I've released 20 liters of sweat at this gate. And the security is actually beating people…. I love you @iam_Davido but the security needs to stop tasing us. #InfinixDavidoLiveInConcert

Davido vs Wizkid bants, as usual

After they all worked tirelessly to settle beef in this industry this year. Only for them to shade wizkid and slap Kizz Daniel's manager… Bad blood already in 2019 #InfinixDavidoLiveInConcert #MadeinLagos

Wizkid did it first

While Davido’s concert was underway and trending on Twitter, Wizkid’s fans decided to trend #WizkidDidItFirst, highlighting all of their idol’s ground breaking feats.

World's first Artist to have a soccer jersey line.#wizkiddiditfirst pic.twitter.com/d8sxFwsOOE

Let me burst you people brain, Wizkid is the first african artist that has his second album still on top ten album on iTunes since it’s released date 17th September 2014 till date. AYO💥 #wizkiddiditfirst

Wizkid is the first artiste to name another artiste after an emoji!!😭😂😂🐸#wizkiddiditfirst

The most remarkable thing about this #Wizkiddiditfirst hashtag is, you can tell he didn’t pay influencers to trend.

It’s purely the handwork of his fans. Wizkid FC y’all deserve a truckload of accolades, you’re the greatest fanbase in the world.

Wizkid will be somewhere right now shedding tears of joy, I swear this love is too much, even as I’m typing right now, I’m feeling so emotional, the love people have for him is so pure and natural💘🔋 @wizkidayo continue being you, we are your family for life❣️ #wizkiddiditfirst

While #WizkidDidItFirst and #InfinixDavidoLiveInConcert were trending, popular Nigerian rapper Phyno was also trending on Twitter. Not because he was headlining a show but because of Nigerian music critic Joey Akan’s tweet;

Phyno had a very disappointing year. He's no longer a part of any conversation.

Imagine this tribal fool!!! Mind ur biz b4 i change am for u. EWU https://t.co/owuhtyyNdc

Compared to the past 4 years was Phyno musically relevant this year?

Una no like to hear truth for this country.

Yes, in the east, phyno is not just a musician— he's a movement all by himself.

But… there's no denying the fact that in the 2018 music scene, he didn't have the best of years. Not even one rave-of-the-moment song

Phyno dropped Fuwa Sewa and many more@JoeyAkan If e easy why you no drop your own song, that your head like 60 watt bulb

I'm not Ibo and I don't understand the language but I prefer Phyno to any other artiste in Nigeria. His calm voice coupled with his beautiful mix of Ibo with English is everything. What conversation is he not in? Because he didn't ask people to steal panties abi? Mtcheeeew…

Lagos is not his target market

Is Lagos Phyno’s market? His hits around here are usually the ones with Olamide. It’s okay to not be his audience (because he raps in his dialect) but saying he had a disappointing year is a lie.

Do you think that if Phyno decides to hold a concert at Eko hotel igbo boys from Alaba will be looking for free tickets so that they can tweet “ 10,000 people came out to see Phyno ?
In the east, we don’t use event venues, we sell out stadiums.

No Joey, Nigerian music industry doesn’t start and end in Lagos! Besides Soco, Amaka and probably Assurance, there was no bigger song than Phyno’s Fuwa Sewa in the East! https://t.co/ZpSuBnqAE7

Joey stated his opinion on Phyno's music in 2018.

He doesn't believe that Phyno did enough.

Instead of people to counter him with stuff relating to music, they're telling him that Phyno bought a Rolls Royce.

Stans are so shallow.

Joeakan says phyno had a disappointing year (i agree), Phyno responds with threats of violence.

The most painful part? Not a single person in the entire thread was honest with their feedback to Phyno. Lol

Is this what fame feels like? A lorry load of YES men? Smh

But how do you people even Make this Phyno issue about Tribe?
You guys have Turned it to Yoruba Vs Igbo issue..
.
The Tweet wasn't even from a Yoruba guy..
.
.
Nigeria is like a Marriage where the husband and Wife really wants to divorce but are just Managing.😭

Small bant about Phyno having a bad year, and Igbo people wants their own country 😂 pic.twitter.com/YFTtlDMMmq

Joey: PHYNO HAD A DISSAPOINTING YEAR.
Igbos: We want REFERENDUM!

If you say Phyno had a disappointing year in 2018 What would you say about the likes of dammy krane, Ycee, ice Prince etc… I need more names biko… Drop and RT lets kuku mention all of them pic.twitter.com/2mbgpqmO9e