Social Media Roundup: Is this your GOAT? 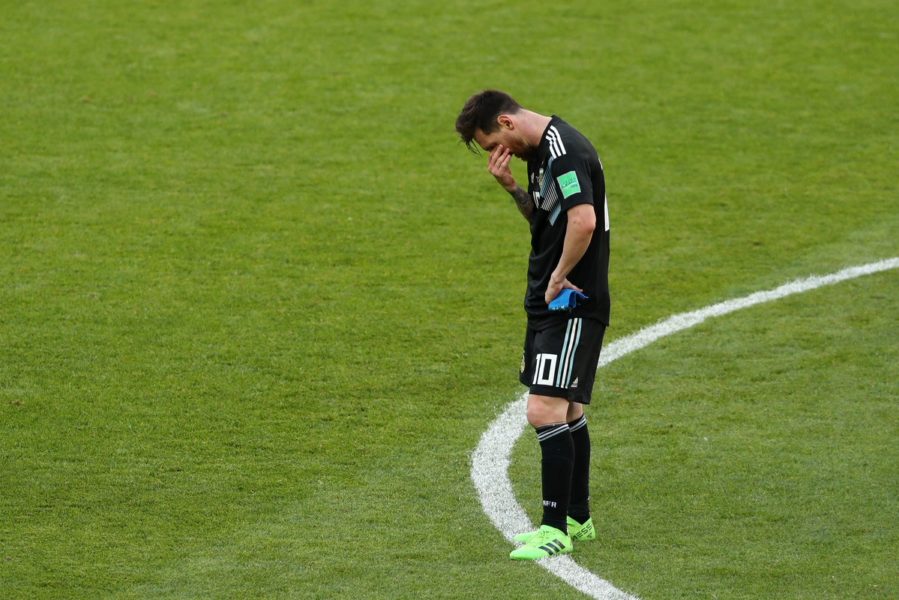 The 2018 FIFA World Cup which kicked off in Russia last week continues this week. Many of the matches played during the course of the week trended on social media. However, Croatia’s 3-0 victory over Argentina yesterday stood out.

Simply incredible from #CRO as they seal their place in the knock-out stages with a historic victory!

Mostly because Lionel Messi, one of football’s most legendary players of all time and of this generation failed to lead his Argentine team to victory. This attracted tons of reactions from football fans all over the world.

Is this your GOAT?

The debate of who’s the greatest of all time (GOAT) in football continues as fans compared Messi with Cristiano Ronaldo, as usual.

No matter how poor Argentina have been, Messi has been invisible this tournament. No doubt about it. Ronaldo’s team is even less talented yet he’s found a way to get them qualified, that’s a GOAT right there. #worldcup

Is this your herbivorous goat??? 😂😂😂#WorldCup #ARGCRO #ARG #CRO pic.twitter.com/dHQ78ccrTx

Argentina/Barca fans: “Messi can’t do everything by himself”

Just found this. I think it’s about time we close the GOAT debate between Messi and Ronaldo. We all know the truth now pic.twitter.com/Dtx4u56lio

FINALLY SOMEONE SAID IT!!!! #ARGCRO RT and Pass it on! pic.twitter.com/irx6yOmZU3

Messi is still the GOAT, show some respect

#ARGCRO Can we stop now cause what I see is that everyone is blaming Messi for the loss of Argentina…..Messi is just an one player he's not the whole team😭😭😭He tried he's best🙏 pic.twitter.com/P7MOs9jVMX

Who’s your GOAT, Messi or Ronaldo? Feel free to drop yout answers in the comments section. Read on for other trending topics on social media this week.

On Tuesday this week, a trailer carrying tons of plywood on the Ojuelegba bridge in Lagos fell off the bridge, leading to casualties.

A truck carrying plywood fell of Ojuelegba bridge today. The truck fell on 3 commercial buses & a private car under the bridge.

I guess it's time we talk about how trailers line up along the stretch of the bridge. These trailers are the major cause of traffic along Ikorodu road. pic.twitter.com/VKlRoEwmrH

I thank God for my friend that narrowly escaped the accident that occurred at Ojuelegba this evening, he was seated by the conductor's side of the bus and when the trailer fell, he quickly ran out. Unfortunately the driver and passengers died. 😔 pic.twitter.com/fBzwDkqbVS

Happening Now: Scene of the accident, where a container fell off the bridge at Ojuelegba, Lagos.

"@oluspicyinspire: A container truck fell from the top of Ojuelegba Bridge and landed on a bus and people around 9pm, yesterday night.

There are claims that two dead bodies were retrieved from the scene and more people were trapped under the container. pic.twitter.com/neeyK4t9f3

💔💔💔 heart breaking to hear the awful news about ojuelegba. May God grant peace to the families of the deceased..

May the Lord give them the fortitude to bear this painful loss.

RIP to the victims of the Ojuelegba trailer crash.. So sad to hear..🙏🏽

Persin go just de inside motor container go come fall for hin head. Ah, pray for LAGOS o. Pray for yourself too. May the soul of those who died in Ojuelegba rest in peace.

Thoughts and prayers with the families of those who lost loved ones at Ojuelegba.

Good morning @AkinwunmiAmbode sir. In as much as we would like to blame the devil for the accident that occurred at Ojuelegba, the government needs to take responsibility. Everyday, we see flat bed trailers with basically nothing holding them down, driving in Lagos is a risk. pic.twitter.com/BvpqkkhyzQ

LASEMA GM, Mr Adesina Tiamiyu:
“If the buses were not parked indiscriminately, the accident would not claim lives. “Commercial drivers should not turn Ojuelegba into a bus-stop. “Let’s have free drive under Ojuelegba Bridge. ”

Ambode should be impeached.

Gbaja should not return and importantly Desmond should return to acting Movies..

This madness on Ojuelegba bridge is avoidable.

People just died now and this is the 3rd time in 3 years.

I still have pictures from the 2015 Ojuelegba truck incident. I was on photography internship and I went to meet a client at Lawanson. I witnessed the horror.

Forget all these mega city rubbish. Lagos scares me!!

Those who got killed @ Ojuelegba tonight were killed bcos they live in a country where govt don't learn from past events. They care less if the same event keeps taking lives in droves as long as their relatives are not involved!

Those people were killed by govt's negligence!

The Lagos state government has reportedly banned trucks from using the Ojuelegba bridge;

The govt has banned trucks from using that ojuelegba bridge.

Banning isnt enough, it should enforce it.

We do hope that the ban is enforced this time. Read more reactions here.

A few minutes past noon today, I signed the 2018 Appropriation Bill into Law. #Budget2018 pic.twitter.com/zQfE5BTPol

The President however had some reservations with the way the National Assembly slashed the budget and he made it known in a series of tweets.

I am however concerned about some of the changes @nassnigeria has made to the budget proposals I presented. The logic behind the Constitutional direction that budgets should be proposed by the Executive is that, it is the Executive that knows & defines its policies & projects.

Unfortunately, that has not been given much regard in what has been sent to me. The National Assembly made cuts amounting to N347 billion in the allocations to 4,700 projects submitted to them for consideration and introduced 6,403 projects of their own amounting to N578 billion.

Unfortunately, according to our Constitution, NASS can do what they did and get away with it. Sad.

On the side of the Executive, this could have been mitigated if they had consulted NASS beforehand in preparing the budget. Sad.

Fault on both sides. We need a new Constitution. https://t.co/FNZn9Z8sMI

At least Buhari has learnt his lessons now. Next time, he won’t fold his arms and not take a stand as regards the leadership of the National Assembly. For Saraki and his many thieving senators, sorry saboteurs, they should be made to pay heavily at the polls.

Outrage! Anger!
After a few days we move on. Next year padding continues. Members of National Assembly know this very well.

Call for #OccupyNASS many will tell you they don't want to die. Meanwhile cut in budget for infrastructural dev has killed more than bullets at protest

National Assembly cut this. They cut that. When MDAs cannot defend their budget nko?
Nigerians are interested in the national budgetary processes. @nassnigeria should start hosting live sessions of the budget defence meetings. We need to know exactly where the problem is.

So,NASS took a knife to d budget, slashed funding in many critical areas, especially critical infrastructure & education, inserted funding & perks for itself, & has no response to d President's speech beyond stupid & watery non sequiturs? NASS is an existential threat to Nigeria.

Like I said, the idea that Beau Harry is the good guy here and NASS are the bad guys is a joke that is not even funny. Game recognise game – the conmen in NASS also know where the election money is hidden.

How can the Executive budget a whopping N4 billion for "Rehabilitation and Additional Security Measures for the United Nations Building"? What sort of renovation/security measure?. I see no sense in such ostensibly inflated sum. I support NASS for reducing it to N100 million.

The Nigerian budget before it goes to the National Assembly and after they finally release it. pic.twitter.com/ZgsfvPSQf9

Just a few weeks ago, Hadi Sirika and the Enugu state governor said the contractor for the Enugu airport terminal had been paid N1.7bn and the balance of N300m will be paid once the budget was passed. NASS cut the Enugu airport budget from N2bn to N500m 🤷‍♂️ pic.twitter.com/g9cHVXVsDG

This week, popular social media comedian Maraji was trending on Twitter after she  posted a new comedy skit.

For my Igbo people 😂😂😂 pic.twitter.com/HYMujmGRhN

Maraji is the funniest and most creative of them all

She’s not even that funny

The Lasisi you’re always criticizing is a better comedian than Maraji. I’ve never found any of her skits funny but she’s very very creative.

Unpopular Opinion about Maraji:
Maraji is not Funny
Maraji is Creative
Maraji has good Graphics Design

I'm sorry but I don't really find Maraji all that funny. Not saying she's not good at what she does but Twyse is way funnier to me. The switch in accent and facial expressions, the edits 👌🏾👌🏾
He is underrated if you ask me

Was laughing at a Klinton Cod joke when this girl told me I hadn't seen anything. Took my phone, opened instagram&showed me about 30 Maraji videos and I didn't smile talk more of laugh.

As if that wasn't bad enough, received a message from Airtel, 'Bundle exhausted'. Tears

The battle of the funniest social media comedian

I like Maraji, you like Lasisi, he likes Craze clown, she likes Twyse.. Must we hate one to prove our love for another?

is it not possible to have preferences without bringing another person down?

Remember when someone tried to compare hazard to Ronaldo a few years ago? That’s how I feel when you people compare lasisi to Maraji. The lack of critical thinking and the disrespect

Bants aside, Maraji is funny. You don’t find her funny is either you’re a sadist, you got lot of problems, you lack sense of humor or you can’t just relate to her jokes.