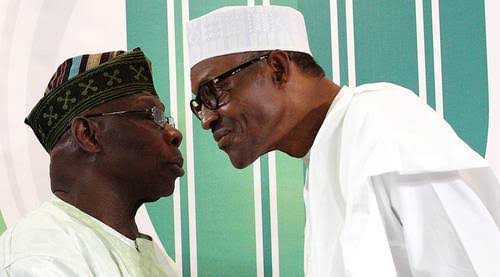 On Tuesday this week, while speaking to a delegation of Buhari Support Organisation (BSO) at the Presidential Villa, President Muhammadu Buhari reportedly criticised previous Nigerian administrations for ruining Nigeria before he assumed office.

He was quoted to have said “railway in Nigeria was killed and one of the former Heads of State between that time was bragging that he spent more than 16 billion American dollars, not Naira, on power. Where is the power? Where is the power? And now we have to pay the debts”, a statement apparently directed towards former president, Olusegun Obasanjo.

Here’s how the former persident replied;

Shots fired! And then began the face-off between the two parties and their supporters. Here’s the social media version.

Buhari asked where is the power? Obasanjo said its in page 41 of his book. 😂😂😂😂

Obasanjo is telling Nigerians to go and read page 41-46 of his book to determine how he wasted $16 Billion Dollars on Electricity without success.

In order words OBJ is saying , "Go buy my book and make me richer; and then you'll know why and how I left you in darkness."

You know they said if you want to hide anything from black people, you should hide it in a book. So all these years, Obasanjo was just testing our intelligence and how committed we are in finding electricity by hiding our $16 Billion Electricity in a book? Lord!! pic.twitter.com/G0aRJrwvyR

Dear Buharideens, before you abuse Obasanjo, this was your MCM in Otta seeking Obasanjo's blessings to become President.

Obasanjo was dropping insults on PMB at every opportunity. Like the bully that he's, he does not know when to stop

Then the taciturn General asked a very simple question; #WhereisThePower ?

Buhari did not mention Obasanjo's name. He only said a former President, but Obasanjo was quick to respond. If he is not guilty of what Buhari said, why is he the one that caught the sub?

Olusegun Obasanjo likes dishing it out but he doesn't like receiving. Reading his response on @MBuhari's "show us what you did with billions spent on energy" speech was really entertaining.
Can't wait to read OBJ's next letter and of course his 3rd Force candidate for 2019. pic.twitter.com/41ZY4gBjth

Just one table wey Buhari shake, Obasanjo is running from pillar to post, struggling to explain his side pf the story. When he shakes the other table, what will awa Ota farmer do?

My attention has been drawn to reports that Obasanjo and Buhari are having an El Classico clash.

That is no El Classico.

While there is a need for a query, the timing, the circumstances, can only mean one thing – Obasanjo's file has been opened because he is speaking up against Buhari's second term ambition. https://t.co/TyET0XVaLt

So a Bunch of Middle-aged Children (thanks @Papadonkee) have been wheeled out to defend Buhari's assault on Obasanjo.

See, no one is defending Aremu. If he fabbed $16 billion let him answer.

But, how come Buhari didn't know about the mis-spent dosh until Aremu criticised him?

Probe Obasanjo and Jail him if he’s Guilty – he is neither a Saint nor Untouchable.

It is this propensity of the Buhari Govt to use “Corruption” to attack only those who Oppose it that makes us know that the anti-Corruption lie is Political and therefore lacking in Sincerity. https://t.co/jx9tzVjE9L

What binds Obasanjo to Buhari and vice versa is stronger than whatever you claim binds you to either. The political elite are bound in a way that your shared religion, ethnicity or geography is not half as strong as the bond of their multi-ethnic and multi-religious social class.

Afonja aligned with Alimi (North), they messed him up, took his life, took Ilorin.

~MKO Abiola aligned with Northern military hierarchy, they messed him up, took his life.

~Obasanjo & Tinubu chose to align with Buhari (North) in 2015…
…let's be looking.#YorubaRonu

The Presidency insists that Chief Obasanjo has some questions to answer and he replied saying he’s ready for probe. Read below for other trending topics on social media this week.

Abacha was trending in Nigeria

You see, our President was very busy this week giving us things to talk and argue about. Asides throwing major shades at his predecessors during his speech at the villa, the President also reportedly named the Petroleum Trust Fund (PTF) instituted by late Military Head of State, Sani Abacha as a “model project”.

According to Premium Times, he said, “no matter what opinion you have about Abacha, I agreed to work with him and the roads we did from PTF exist from here to Port Harcourt, to Onitsha, to Benin and so on.”

Many Nigerians were not impressed.

Buhari boys are following him to defend and praise Abacha. May we not reach this level of stupidity.

You hate corruption so much. All appearances of it. All versions of it. You are the grand Ayatollah of integrity.

But Abacha is ALWAYS your reference point for responsible leadership. In fact, you don't care what anyone thinks.Why? Because "he built roads and hospitals." 😊

Shameful that after 20 years, and weeks after he himself talked about Abacha loot that is still being repatriated, Buhari still finds time to praise same Abacha.

This man's dissonance is legendary. Will be studied for centuries. https://t.co/vuoBQv7Spa

If the President @MBuhari actually said that himself and Abacha built road from Abuja to Port-Harcourt then it is unfortunate.

It simply shows that he knows very little about this country.”

Stole a total of £5B from the Nigeria's coffers.

Abacha's family agreed to return $1.2B that was taken from CBN.

In 2004, Abacha was listed as the 4th most corrupt leader in history.

Buhari is praising this same Abacha because he built roads.

Shehu Musa Yar’Adua was a Military Officer from the North, just like Buhari was in 1993 – yet he spoke up courageously against Abacha and was jailed until he died in jail.

Buhari not only did not speak up against Abacha, he served under him and now defends his corruption.

Nigerians and their double standards

Dr. Kayode Fayemi was one of the leading lights of "Radio Kudirat", Tinubu went into exile. Both opposed Abacha's brutality & sang to high heavens about him being corrupt.

But today, both serve the same Buhari, who eagerly defends Abacha's legacy.

You hate corruption so much. All appearances of it. All versions of it. You are the grand Ayatollah of integrity.

But Abacha is ALWAYS your reference point for responsible leadership. In fact, you don't care what anyone thinks.Why? Because "he built roads and hospitals." 😊

You don’t hate corruption if you can make excuses for one administration and harshly criticise the others on the same issue. That is hypocrisy.

The fact that Abacha looted our money doesn't mean we shouldn't give him kudos when necessary. Buhari praised him for building roads and hospitals. Did he praise him for looting our money?

Last Sunday, popular Nigerian blogger, Linda Ikeji made a big revelation on social media, she’s going to be a mum!

OMG! The most amazing thing has happened to me! I am going to be a mum. My greatest dream realized! (baby bump photos) https://t.co/wL5ernkBVg

What happened to being celibate?

Female online pundits are gullible. Beyonce preaches feminism but she is married to Jayz with his misogynist lyrics, Chimananda Adichie thinks marriage isn't an achievement but she is married & keeps her man secret, Linda Ikeji is pregnant while preaching celibacy, too bad!

Linda Ikeji allowed girls to join celibacy gang only for her to show up pregnant. We will not take it.

Lol, Linda ìkejì is pregnant, and it's trending because some of our ladies fell stupidly for her celibacy advocacy…. It has been said plenty times let me say it again BE YOUR SELF, don't allow yourself to be easily influenced, fake people everywhere……

Someone found the baby daddy, allegedly

Jesus Christ said he'll be coming a second time, what if Linda Ikeji is the second mother of Jesus since she's celibately pregnant pic.twitter.com/broiIJfs1J

Last Saturday, Merghan Merkel, former American actress lived every little girl’s dream when she got married to Prince Harry, becoming the latest member of the British Royal Family and the Duchess of Sussex.

The royal wedding was just as magical as we imagined it would be and so was trending globally on social media for days.

Big fan of the whole Harry leaving an empty seat for his Mum thing. It’s a lovely touch. #RoyalWeddding pic.twitter.com/h990KM1m1f

#RoyalWeddding I’m so happy for her
I hope one day I can marry a prince 🤴🏻 and become a princess 👸🏻 pic.twitter.com/w5cD0ZoCZb

For those saying the royal wedding is “stupid”. You’ve forgetten that this is fairytale so many dreamed of. Meghan Markle, marrying into the royal family is symbolic and healing on so many levels. let go of your pettiness and embrace a beautiful moment in history #RoyalWeddding

Beautiful photos we cannot get enough of

ART! these pictures belong in a museum, the photographers did not come to play that day #RoyalWeddding pic.twitter.com/zFGDVHx9vP

A ‘happily ever after’ gives hope to a weary world. #RoyalWeddding pic.twitter.com/4IFJepMIuF

I just hope Meghan’s “lack” of make up will set a new trend for brides, especially in Nigeria! #RoyalWedding

It’s weird how Bishop Michael Curry did not speak for up to 15 minutes at the #RoyalWeddding and people thought it was long. Come to Nigeria 😂 pic.twitter.com/D2rUBtUSY7

To all Nigerian ladies that will do photoshoot, pretty wedding shoot and get a killer gown that costs more than the wedding. Hope you are learning. Also to the Yoruba mothers, am still trying to count the cows killed. 😂😂😂#RoyalWeddding pic.twitter.com/Wwuv0SB5pR

Was Prince Harry the last single prince in the Royal Family? Asking for a friend. Read more reactions here