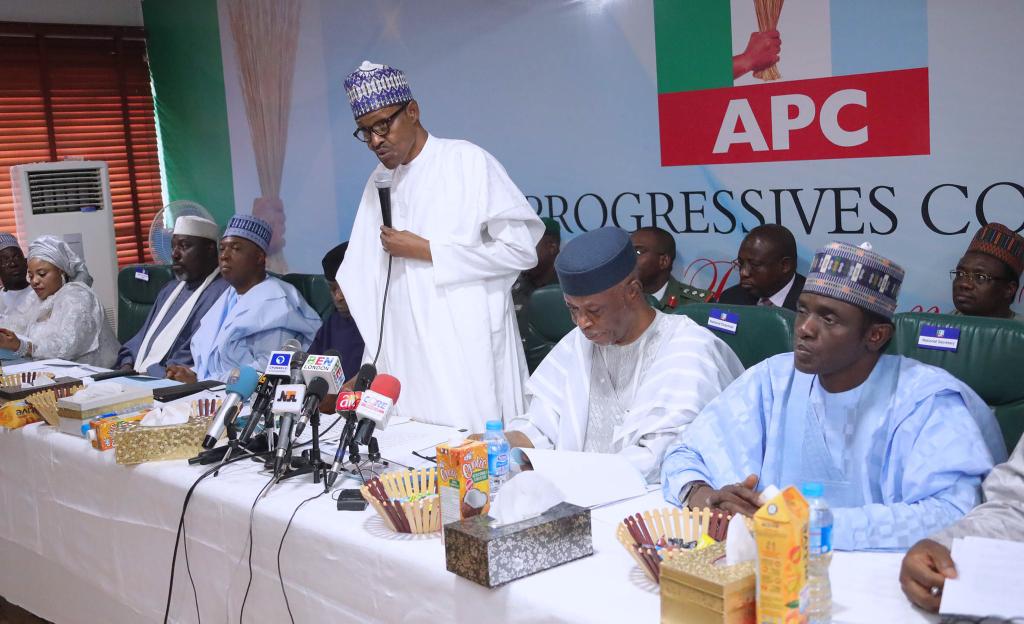 On Monday this week, President Muhammadu Buhari announced his intention to contest for a second term in office in the 2019 elections.

President @MBuhari has just announced his intention to seek the presidential ticket of the All Progressives Congress (APC) and contest for a second term of Office in the 2019 elections.

Apparently, the reason behind the president’s intention to be re-elected into office is based on the feedback he got from certain Nigeians. Read all about it here.

Could this be the real reason?

This is the reason behind Buhari’s hasty and unplanned second term declaration:

The #PDPNorthWestRally on Saturday in Katsina, while he was in Daura sent shivers into his camp and they begged him to declare before he travelled out again.

A few reactions from Nigerians on social media.

Why exactly does Buhari deserve a second term?

Nelson Mandela could have won second term easily, but he stepped down. He said “ At 75 I should be at home with my grandkids, not fighting for power”.

Buhari at 87 sees nothing wrong in struggling for power with the younger ones. Greed is one reason why Nigeria is a failed state

Buhari wants to do a second term.

Go and get your PVC, no matter what it takes.

Now that Buhari has dared me and declared for a second term, my gloves are off. We must fight to take back our country from power hungry dead brains bent on killing a country so endowed but so unfortunate to be hijacked by heartless power seeking nincompoops!

Yet he wants a second term!#NeverAgain

Meanwhile Buhari declared for second term on his way to medical tourism in United Kingdom. This is how they foisted a sick man on Nigeria in 2015. #SackBuhari2019

Looks like Market tanked just after Buhari announced he will run for a second term. 😳😳 pic.twitter.com/tuKcY8q7YC

How do you see President Buhari's declaration of his second term ambition?
Please retweet after voting.

President Buhari has declared his intention to run for a second term in 2019. Will you vote for him?

May your life and finances be managed the way Buhari is Managing Nigeria'.

Are these people trolling?

it will be necessary for President Buhari to run for a second term in office as fours year are not enough to fully implement the vision he has for the country. pic.twitter.com/f5VgEN5IYZ

If you want Buhari for a second term. We cannot be friends. We have nothing in common. Stay away from me please.

Oh, and the world is watching

President Buhari declares he will stand for a second term and then immediately boards plane for an extended vacation to London… Interesting optics. https://t.co/TZjckVbdZC

Memes, because there are always memes

The moment OBJ heard Baba #Buhari has declared for a second term. pic.twitter.com/66WKgdeWqI

Shortly after announcing his intentions, the president departed Nigeria for an official visit to Britain. If you did clamour for the president’s re-election, drop your reasons in the comments section. Read on for other trending topics on social media this week.

You can’t make enough money as a woman in Ghana

This week, Christiane Amanpour, popular journalist and CNN’s Chief International Correspondent was in Ghana to explore the love lives of Ghanaians for her Sex and Love Around the World series. As short clip of her discussion with Moesha Buduong, a Ghanaian actress, has been making rounds on social media.

In the clip, Moesha claims that Ghana’s economic situation is what drives some women to date married men who can support them. Watch it below.

Ghanaian actress Moesha Buduong tells CNN’s Christiane Amanpour that Ghana’s economic situation is what drives some women to date married men who can support them. pic.twitter.com/alGgo2gfCB

Amanpour’s reply to all she said was just priceless pic.twitter.com/ZCR4njVRIR

A few reactions from Ghanaians on social media

I dont think Moesha know Christaine Amanpour.
This is crazy!!!!!

I sure say Christiane Amanpour was just in the hood to do her nails and met this one in the salon and just decided to have a cordial chat with her but it turned out to be rather interesting so she whatsapp ein cameraman sharp.
Moesha is sorry, she no sheda😂

I think what irritated me the most about that CNN interview was Amanpour's body language.

Ma'am, are you really going to enter plane and come to Ghana to pretend that transactional relationships are new?

The entire social structure of patriarchy is based on it.

When is Amanpour coming to Nigeria for Sex and Love series?

Amanpour needs to make her next stop Nigeria tbh https://t.co/5FZQifbBPx

The next time Twitter Nigeria and Ghana Twitter fight, this video will be used against Ghana.
See what aunty is saying during interview with CNN's Amanpour. 😕😕😕 pic.twitter.com/Hc60xTaEz8

I know many Nigerian ladies who were forced to resign because they refused to blow their bosses at work.

If Amanpour visits them at home, what should they tell her:

1) Nigeria is fine and dandy, we good out here

2) It is extremely difficult to progress here without sex

Are you guys just embarrassed she said it to Amanpour on an international platform? Or are you genuinely distressed that is the thinking and reality of young African women?

The trying times of Professor Akindele

Professor Richard Akindele, also an Anglican reverend is a lecturer at the Department of Management and Accounting, Obafemi Awolowo University (OAU). The professor has been trending on social media this week because a female student anonymously released an audio of the professor demanding for sex in exchange for a higher grade. Listen below.

A face behind the voice.

So that bastard Akindele don turn to Professor. Dude has always been like dat but unfortunately no gsm for our time. E go even dey quote bible. OGUN kill am

Professor Akindele can neva change. Heard so much about his randy attitude wt female students wen in oau. Too bad this kind of man will call himself a man of God. Note however that dis man is not a man of God cos no genuine man of God would ever ask for sex in place of mark.

Shame on you Professor

Professor Akindele has brought shame to himself, his profession and his family. He abused his privileged position as a lecturer and Pastor.
He is not deserving of sympathy.

So this man is a coded hitmaker all these years. The case is not fresh I guess, there are lot of dem like that in that School. Reverend Professor Akindele is a disgrace to all Anglican families

The name of the professor is Prof Richard Akindele, and he is in the management and accounting department. Sadly he is someone i knew personally back then in school. I am ashamed that he could go this low to solicit sex form a student who failed. https://t.co/sp5oSPFaPy

Good evening Ma, Actually Professor Akindele is a professor in the dept of management and accounting, and also runs a church in Ile-ife. I am shocked at this and hope the school authorities will not sweep this case under the carpet like they have done with others. What a shame!! https://t.co/GJ8bDDZtQa

Some people blamed the student

If a lady could score 33 and then set up this type of thing. She must be possesed. Yes the prof is wrong, no one is supporting him. But the lady does not have the right to go ahead and do all these. If she isn't ready to take the bait. She should do it next year.

The wife of the OAU professor Richard Akindele had said" the enemy is after my husband " is God not faithful?

I saw a post of a girl who posted a proof of her lecture (Professor Akindele) OAU demanding for sex for a mark upgrade and reading Nigerians comments insulting the girl for not passing in the first place, saying she will not graduate and all🤦🏾‍♂️, Nigeria my country.

"IS THIS YOUR MAN OF GOD?" pic.twitter.com/imIh68Kj3f

Today, popular Nollywood actress, Genevieve Nnaji broke the internet with a video of her endearing Shaku Shaku dance moves to Olamide’s Science Student. Watch it below.

I hated Shaku Shaku until Genevieve did hers 😭😭😭😍😍😍😍

How can anyone watch this Genevieve Nnaji's Shaku Shaku video and not smile 😩🔥🔥🔥🔥🔥❤️❤️ QUEEN GENNY BROKE THE INTERNET ! Our PRIDE! She deserves some Accolades 😩👏🏽👏🏽👏🏽 pic.twitter.com/hpCQ8PsSQk

Ever heard of a #DivaShakushaku?
Genevieve Nnaji is the definition of beauty interwoven with class. 😍😍😍

And there kids, is the story of how Genevieve Nnaji broke the internet in April 2018 with a Shaku Shaku so rich in style it could be a Brunei prince.

This Genevieve Nnaji's Shaku shaku attended Harvard,
___
did she kill it or nah to olamide's science student?? pic.twitter.com/WQXENmGJcC

This guy doesn’t think so

What's special about that Genevieve shaku shaku🤷‍♂️.. overhyped something 🤦‍♂️