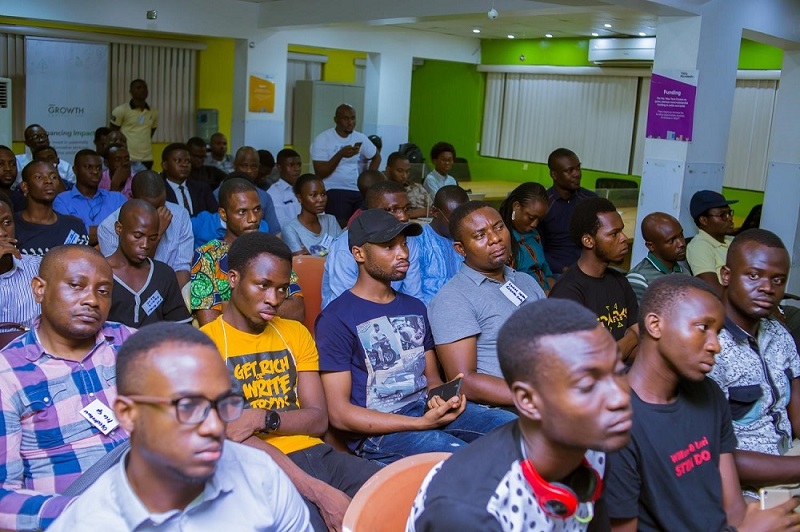 The event, the first of many events being planned by ConsenSys, was organised in partnership with CcHub, Microsoft, and Cryptographic Development Initiative Nigeria (CDIN). The aim of this particular event was to introduce Blockchain and the Ethereum platform to the Lagos tech community. In particular the event explored the various use cases of Blockchain technology for enterprises, entrepreneurs, identity, finance, and government in Nigeria and Africa.

Here’s a recap and pictures from the event.

The event took place at Co-Creation Hub Nigeria (CcHub), Yaba, Lagos. Registration started at 5:00PM, with some attendees coming in as early as 4:00PM.

The event kicked off at 6:00PM with an introduction to ConsenSys by Ben Onuoha, the Community Lead of ConsenSys Africa. Ben reiterated that ConsenSys was interested in increasing the awareness and knowledge of blockchain on the African continent. He encouraged the attendees to start thinking about problems that could be solved in Africa using blockchain after they learn about blockchain and Ethereum from the speakers.

Ben also introduced the various arms of ConsenSys, including ConsenSys Enterprise, which consults and delivers blockchain solutions for enterprises and government clients; ConsenSys Academy, which educates developers and entrepreneurs about Ethereum through training programs; ConsenSys Capital,which offers token diligence and launch services as well as cryptocurrency asset management and venture capital; ConsenSys Labs, which consists of various “spokes” (incubated and accelerated companies within ConsenSys) that build decentralized applications on the Ethereum blockchain.

Following Ben’s opening was an introduction to Blockchain technology in layman terms (Blockchain 101) by China Muoka, Global Director of Talent Acquisition at ConsenSys. China broke down blockchain, Bitcoin, and Ethereum in layman’s terms, comparing the disruption of Blockchain to email. “To send an, ‘I love you’ letter to someone, you had about four gate-keepers: the envelope seller, the stamp, the postal service, the delivery guy, and the post box people. Email came and disrupted this by allowing you to send messages instantly without the need for the middlemen. Now in the same way, blockchain is disrupting many industries by allowing peer-to-peer transactions without the need for the middle man.”

The next person to take the stage was Eseoghene Mentie, QA Manager of uPort, ConsenSys. She talked about the Ethereum platform as a tool for building blockchain solutions. She explained how smart contracts — code that self executes — is distributed and allows redesigned business processes.

Eseoghene further explained the concept of blockchain, Ethereum and ConsenSys showing the audience the basic architecture of a decentralized application. She also expounded on how ConsenSys is developing the blockchain ecosystem through the Enterprise Ethereum Alliance, Blockchain for Social Impact and Accounting Blockchain Coalition. Eseoghene wrapped up with a high level overview of one of ConsenSys flagship products – uPort which is a self sovereign identity app.

The first session ended with a talk on Building a Blockchain business by Eromosele Omomhenle, Technology Strategy Executive, Fintech, IOT and Blockchain, Microsoft Nigeria. He elaborated on how Microsoft is helping startups and Enterprises to build Blockchain applications by providing a fully agnostic platform that enables flexibility and confidentiality.

The next session was a panel discussion on blockchain use-cases for Nigeria and Africa. This was a very interactive session where attendees asked the questions they had about blockchain, Ethereum, and ConsenSys. Questions from the audience included what would Blockchain would look like a decade from now; how expensive blockchain infrastructure was; network processing times on the Ethereum network; inquiries about ConsenSys Academy; among others. Panelists dissected blockchain use cases in healthcare, identity, and many other areas.

The final session of the event was Networking and Refreshments at the rooftop of CcHub.

The event was indeed a huge success. The turnout was great – the event was oversubscribed by over 200 people! The talks were insightful, and the panel discussion very engaging.

You can look out for more Blockchain events by ConsenSys in 2018.