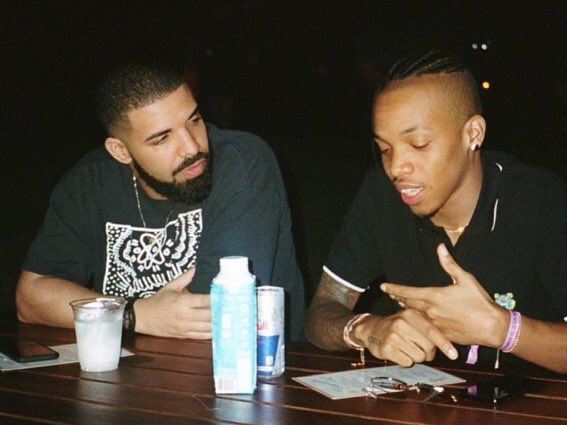 This week, Nigerian musician, Tekno posted a photo he took with Drake on Instagram hinting at the beginning of a collaboration.

Here are a few reactions to the “announcement” by Nigerians.

Pana, most played song on Nigerian Radio for 14 straight weeks in 2016 & covered by Major Lazer.

Tekno vs Wizkid vs Davido

As expected, the news escalated into the unending Wizkid vs Davido argument, but this time, add Tekno to the mix.

If we are being truthful, “musically” Tekno has more to give than Wizkid.

Drake is actually feeling and listening to Tekno who has more to give than Iyeyeye 😊😊😊 pic.twitter.com/cRc2VLo2uS

Lol
Just small picture, now tekno has more to offer than wizkid. It's the Harmattan that's drying out the lubricant in your brains

Davido achieves something, they drag WizKId into it

WizKid achieves something, they drag Davido into it

Tekno achieves something, Wizkid and Davido fans start a war

What is really the problem???

Africa is now about Wizkid & Tekno. Tekno substituted Davido 🐸 🐸 🐸 😂 😂 😂 End of the road for frog nation.

Some people believe the arguments are baseless

Tekno linking up with Drake is a plus, but people throwing shade at Wizkid with it makes no sense. They have 3 songs. Come Closer went gold in Canada, Silver in UK. One Dance hit 1 BILLION streams, won 3 BBMAs, 2 iHeart Radio, 1 ASCAP, 1 Echo awards. Tek has a lot to offer too.

Why the drawback and bad belle

When Tekno worked with Columbia Records, it didn't trend.

When he was paid N24m in Kenya, it didn't trend in Nigeria.

He's linked up w/ Drake, some people are trying to make it about Wizkid by throwing shade.

Tekno better not give Drake all the secrets to this Afro Beats ting or give out all the dope beats he’s meant to keep for himself. We all know Drake is a culture vulture.

I bet one of his life goals has just been achieved. Happy for you Drake! pic.twitter.com/0HgCCZwMhk

Drake: It's Quavo man, not Quefo

While we patiently wait for the outcome of Tekno and Drake’s collaboration, here are other interesting topics on social media this week.

Following last week’s #EndSARS campaign on social media, Nigerian youths decided to take it to the street in form of rallies in major cities across Nigeria. However, the Nigerian Police Force had their own plans; an anti End SARS campaign.

Using the #SupportSARS hashtag on social media and more supporters with colourful banners on the street, #SupportSARS managed to overshadow #EndSARS.

This angered supporters of the #EndSARS campaign

Nigerians are the problem of Nigeria. These women do not look like they know what SARS is but here they are, all for the hustle. The irony is that #SupportSARS is trending, but #EndSARS isn’t… I’m gutted 😔 pic.twitter.com/qiBni81HT2

Look at the faces of the people who partook in the #SupportSARS rally.

They are the end result of our enslavement to governments we voted in by ourselves.

Majority of Nigerians can be bought to rally with just #500.
At this point, what we really need to end is POVERTY. pic.twitter.com/tWhOeyh3bj

Must everybody support any criminal minded people calling for #EndSARS? U better #SupportSARS #ReformSARS. pic.twitter.com/bdb4KiHJN4

For the youthful exuberant that preach revolution in Nigeria, please refer to #EndSARS versus #SupportSARS. Thank you.

Those #supportsars banners are too well designed and neatly printed. There is too much attention to detail. Its obvious this is an undercover attempt to ambush the #endsars campaign by a well funded group. It can't be the masses. It can never be.

Now I doubt if Nigeria can be better. Some people just sold their humanity just for lunch money. Imagine the u-turn against the #endsars campaign.

Look at the banners, you can see this #supportsars was a sponsored campaign. Look at the money they spent to make Nigerians liars

Don't be distracted, together we will #EndSARS.

After Nigerians have agreed to protest #EndSARS. Some suddenly made a shocking U-turn to #supportSARS

So there is a protest for #EndSars and another for #SupportSARS on this same day, by youths of this same country. Naaa fam! See why I hate poverty? See why I focus on my bants? See why I have left Nigeria to God? See why I…. NVM

It got to this

The kind of anger I feel right inside me ehn, I'll just pray for everyone that organized the #SupportSARS movement. God will visit you with the same brutality SARS treats Nigerians. Its a simple prayer, just say Amen. #EndSARS

What if we pray this simple prayer 🙏 :

May you be the next SARS victim if you take part in the #SupportSARS rally against #EndSARS.

Say Amen if you support this prayer

So they never lead us ASTRAY

To those who #SupportSARS toSTAY

I hope SARS make them their PREY

For those you who collected money for the #SupportSARS rally, hear this prophecy; "a day is coming, when you will need far more than what you collected to free yourself from the oppression of the one you are standing by."

On a lighter note, read this hilarious open letter to SARS.

On Tuesday, the Nigerian Law School (NLS) inducted a total of 4,294 new lawyers into the Nigerian Bar Association with the exception of one person; a lady named Abdulsalaam Firdausa Amasa. According to the tweet below, Firdausa was denied being called to bar because she wore a Hijab under her wig.

She dreamt of becoming a lawyer

She studied law at University of Ilorin and graduated with 2.1

But was denied being call to bar because of #Hijab #EndDiscriminationAgainstHijab

Firdaus deserve to be called to bar pic.twitter.com/r1AzxKNXIl

Hijab is not choice, it's a Divine rule. Our Muslim lawyers or women generally must be respected.#EndDiscriminationAgainstHijab

"Assalamu Alaikum. I graduated LlB since 2010. I didnt even attempt to register for law school because of these injustices. Alhamdulillah something is being done about it. Jazakumullah khairan." This is from a sister who would not succumb to the #EndDiscriminationAgainstHijab

There’s no Lawyer or Barrister on Judgement Day, No Attorney General or Judge, The Almighty Judge on that day is Allah, Obeying Him is a must not a choice.#EndDiscriminationAgainstHijab

Stripping muslims ladies in law school of their identity (Hijab) will not make them better professionals. #EndDiscriminationAgainstHijab

#EndDiscriminationAgainstHijab the oyinbos who dashed you wig and gown are beginning to recognise diverse faith based dress codes in different professions. Call the lady to bar. Interesting how Twitter HUMAN LIES activists went blind on this. pic.twitter.com/wlJw88E4eI

I keep asking.. How is it that the Hijab is as an instrument that brings shame to the Legal profession that law students are not allowed to wear it during call to bar? It's 2017, finding a common ground that's suitable for all shouldn't be hard. #EndDiscriminationAgainstHijab

What you should understand is that, Islam is not just a religion, it is a way of life.

When you choose to follow this religion, you do what it says. what is wrong with wearing a piece of cloth just to cover your hair? #EndDiscriminationAgainstHijab

These are engineers with the Hijab. They didn't have to give up who they are for the profession. #EndDiscriminationAgainstHijab pic.twitter.com/oUSjUoi4Dd

Some do not posses the common functional sence to understand that the laws of Allah cannot be over ruled.#EndDiscriminationAgainstHijab

Others believe the law must be upheld regardless

If care is not taken, Call to Bar would have graduates coming
-in sutana
-in hijab
-barefooted
-with turari
-with rosary
-with tesibiu
-with opon ifa
-with bante

As everybody tries to express their religious freedom at a strictly professional environment with clear rules.

I was there and others who wore hijab took it off when it was time for the ceremony. She has been studying law for six years she ought to know this isn't part of their attire. Some of the benchers were Muslims but none wore any of such https://t.co/LyAtjHeZap

As a muslim on the TL, I understand that it may be difficult not to take sides with the hijab babe. But deep down you know she messed up.

Deeper life members don't wear Trousers but they know they have to wear during their Nysc.. Do you see them bothering us with their faith? Why should Hijab be an exception. You know the constitution, you signed for it so what exactly is your problem?

I think it’s a ridiculous rule to not be allowed to wear hijab for call to Bar. Makes no sense to me

I also think it’s ridiculous to go somewhere knowing their rules and regulations, break it, then say it’s unfair.

Is she the first Muslim woman to be called to bar?

The past female CJN was Muslim and even at that didn't wear hijab under her wig.

It's not a specific hijab ban let's get that straight. Law school does not target hijabis. You're just not allowed to have any thing on your head during call. You're not even allowed to fix a weave or braids or whatever. Just your hair .

Trust Nigerians to make jokes out of sensitive subjects

They said “take off your hijab”
She said “Girls not hot” https://t.co/YyW8piWzLU

"The constitution allows you to wear hijab"

It also allows you to wear slippers. If you wear it to Quilox and they bounce you, complain.

Do you think Firdausa should be called to bar or not? Drop your thoughts in the comments section.

Kiss Daniel’s legal battle with G-Worldwide continues this week with a shocking revelation from his lawyers. They reportedly issued a statement claiming that for two years, the record label placed Kiss Daniel on a ₦30,000 salary which later increased to ₦50,000.

Lmaoo G-worldwide Ent. Placed Kiss Daniel on a monthly salary of 30k then after Wonu remix it was increased to 50k…. this was at a time when Woju & Laye we’re hit songs 🙆🏾‍♀️
The label gave him 200k for his fathers burial 🙆🏾‍♀️

I’m reading the statement from his lawyers and according to the statement the reason why Kiss Daniel wanted out was because
G Worldwide Ent. repeatedly refused to grant Kiss Daniel unrestricted access to his account and books as provided by his contract.

Am I the only one that doesnt believe this story of Kiss Daniel collecting 30k as salary.that news is so fake

No way I'm believing that. Never

As G-Worldwide is yet to issue a reply to these statements, the drama continues!

Thank you Joseph, I appreciate your feedback. Keep reading!