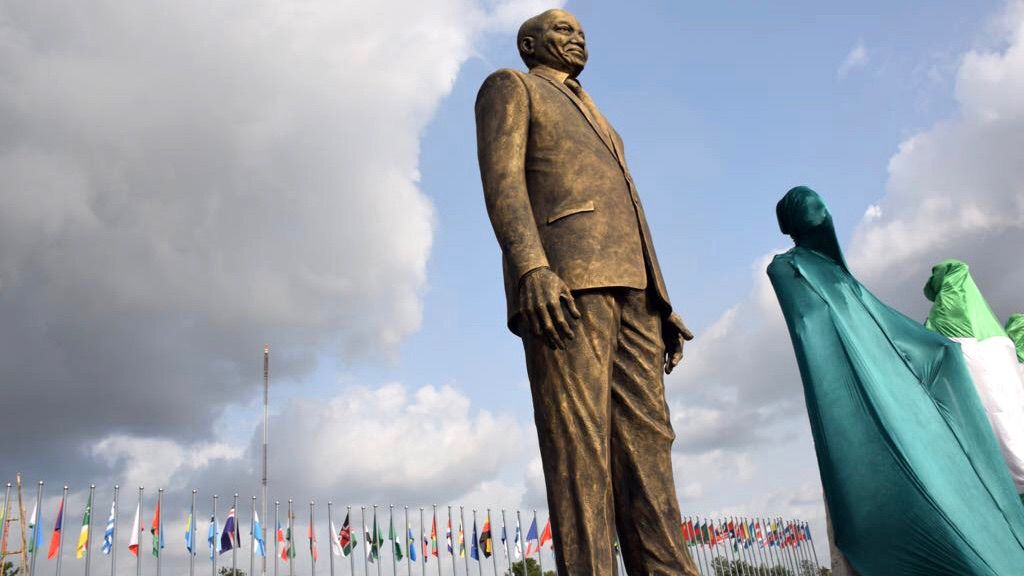 On Sunday, October 15, 2017, Rochas Okorocha, Governor of Imo State honoured Jacob Zuma, President of South Africa in Imo State. The series of event entailed naming a road after Jacob Zuma, giving him a merit award and the most baffling of all, erecting a ₦520 million statue of the South African President.

I found some of the mostly plausible reasons behind Governor Rochas’ decision on social media.

Nigerians are one of the most intelligent people in the world but periodically we choose the dumbest ones to rule over us. Rochas

In a sane country, Imo people will be on the streets asking Rochas to resign or be impeached. They would be ready to recall HoA members.

In Imo State, billboards surfaced around the town after the Governor shook hands with Obama in USA in 2015, he reportedly spent N600 million on a Christmas tree in 2015 and now N520m on a statue for a foreign President, yet still owns pensioners and workers several months arrears pic.twitter.com/UXVB89xbVd

And then there were jokes; we don’t know whether to cry or laugh

When we talk about CLASSIC & UNDILUTED buffoonery,

They are both Governors

Good morning to all everyone except people from IMO state, go and collect your good morning from President Zuma. Your birthright has been sold.

The beginning of lost Twit-battles

Rochas erected a statue of Jacob Zuma in Imo

This govt & making Nigeria a subject of international ridicule pic.twitter.com/wAx6o97Fxh

You can't tweet such but you can erect a statue that brings cheap shot on the nation.We can't even win a twit-war wit South Africa anymore

Note to the next governor of Imo State

Dear Next Gov of Imo State, on May 29, 2019, your first official assignment is to pull down the insult erected by Okorocha in Owerri

Vote for the next imo state governorship candidate that campaigns to pull down this statue…. pic.twitter.com/ko64PiHyJJ

There’s more where that came from

After the national uproar caused by Governor Rochas’ actions, he came out to say that he owes no one any apology. While we continue to question our choices of elected leaders, here a few other interesting topics on social media this week.

The tale of an African superhero

This week, Marvel released the full official trailer of their much anticipated movie, Black Panther. Watch it below.

The trailer created so much buzz on social media globally. And since the movie is about an African superhero, it made sense for Africans to join in. Here are few of their reactions.

as an east african fuck the black panther movie, lupita the only one resembling my part of africa,all the other black hollywood elite greedy

First of all a new black panther trailer is out go and watch and see the greatness that's wakanda, something Nigeria can be

Wakanda just reminds me of Nigeria with so much resources(Vibranium and Crude oil(+others) but we corruption instead of Black Panther.🤷🏽‍♂️ https://t.co/CPrXds7WuY

Is it me or Wakanda and Black Panther is modeled after the Zulu Empire? The accents in the trailer scream South Africa & Zulu #BlackPanther

Black Panthers will be out in cinemas from February 16, 2018. Check out more comments on the movie here.

Recently, due to a Facebook post termed “disrepectful” by the management of the Redeemers University, Adebowale Adedayo, a student of the school was expelled a few weeks before his graduation.

Adebowale, popularly known as Mr. Macaroni, is also an actor and when the news of his expulsion broke, Nigerian celebrities took to social media to appeal for the reversion of his expulsion.

#RedeemersUniversity PLEASE live up to your name. Be an example of a truly Christ-like Uni. Don't Condemn. Forgive and #RedeemAdebowale.

So i am pleading on behalf of Adebowale. Please take his future into account. Please remember the amazing things he did over those 4 years and don't bury him over one thing that has displeased you. He's clearly a bright student. #RedeemersUniversity #RedeemAdebowale

Please use this hashtag to help this boy. Please. He should just be given his degree at least! #RedeemAdebowale

Others joined in too

A Muslim attends a Christian university, does his best to represent & promote the university well; he shouldn’t be expelled #RedeemAdebowale

If you attended Redeemers University, you'll know that it's unethical to expel Debo Macaroni.#RedeemersUniversity #Redeemadebowale

This week, MSE Gang, a Nigerian record label accused popular musician, Olamide and his crew of stealing their beat produced by Young John. Apparently, the beat was allegedly stolen and used by Davolee–YBNL’s newest artiste. #OlamideStoleOurBeat trended on twitter.

Some people believe it was just a publicity stunt

While some were disappointed

Olamide’s fans had his back

Where did you keep your beat before #OlamideStoleOurBeat

#OlamideStoleOurBeat Nope, he probably showed you how to use it.

He stole your beat??? Go to the nearest police station 😋😂😂😂

In my opinion, the whole debacle was just MSE Gang’s way of promoting their new single.