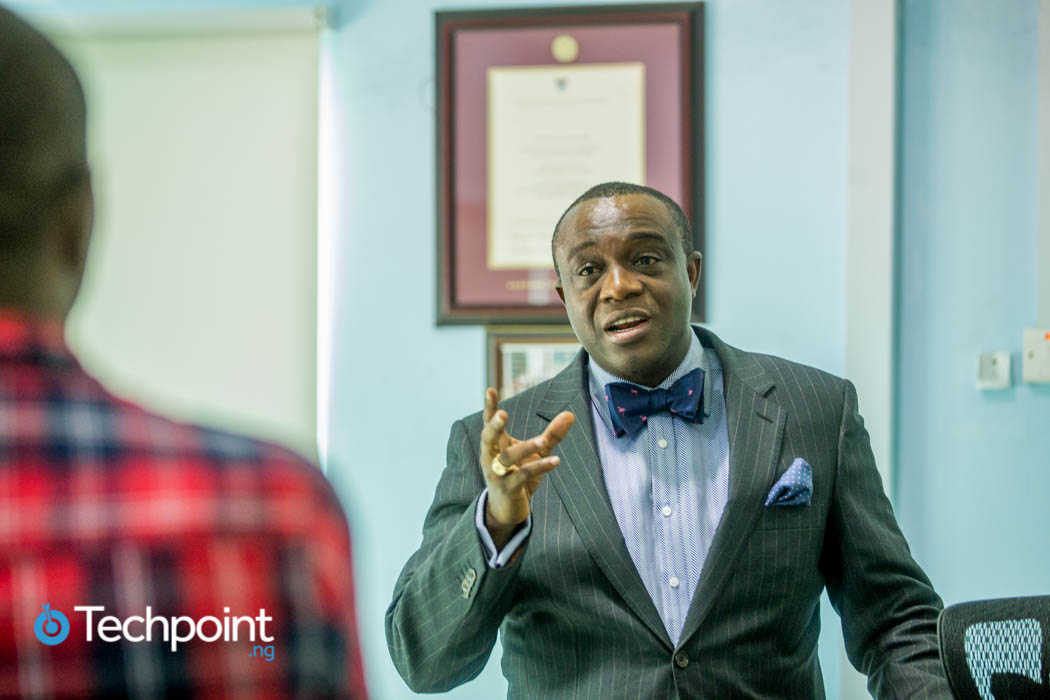 When Yele Okeremi left his consulting job at Inlaks Computers in 1989, the banking sector was his least favourite place to end up, but he did anyway.

As serendipity would have it, the management of Industrial Merchant Bank was looking to replace foreign software with in-house alternatives and, as he grew into the role of CIO, Yele got first-hand exposure to “the secrets of software development”

“That was when I realised that we could do better than all those guys that came with briefcases from Europe. That’s why we started what we are doing today”, said Yele during a recent interview with Techpoint.

What follows is a summary of Yele’s thoughts on building a successful business in IT.

Muyiwa Matuluko of Techpoint: In terms of IT development in Nigeria, 1994 was quite early days. I imagine business was tough.

Yele Okeremi of PFS: Nothing in life is really easy; success doesn’t come easy. People who make it look easy are not telling the whole story. Even at the time we started, we already had accomplished predecessors like JKK, Datamatics and Chams.

But we had the unique approach of selling software that was developed in Nigeria by Nigerians. Most of the people — not all — that were in IT business at that time were basically selling either hardware or representing international companies selling software.

MM: You keep referring to “we”. I take it there was a founding team. Or was it just you in the beginning?

YO: I had a team from the get-go. The software business is so complex that, if you really want to have an enduring system, you cannot initiate and complete it alone. I realised that even from the very start.

MM: My guess is that you wrote the code in many of PFS’ early software products Do you still code?

YO: No. I’m older now and there’s absolutely no way you can compete with your youth. I was reminded how rusty I have become when I attempted to help my first daughter — she studied Management Information Systems — with her final year project.

But you know what they say — “old soldier never dies”. The logic and capability are still there. But it can never be like the old days when I could code from Friday till Monday without a minute’s sleep. That’s impossible today.

As the business changes, the need for what I do also has to change. It’s more beneficial for me now to utilise my time as a mentor and coach to many young people. It was a very difficult transition when I made the decision to stop coding, but it was a very good move.

MM: Some people believe there is a dearth of software development talent in Nigeria. Seeing as you’ve have had to deal with mentoring and coaching young talent, what’s your take on this?

YO: Our issues have nothing to do with talent.

You may not appreciate how decadent the society has suddenly become. There is this funny video on the internet where a son proudly tells his father that Senator Dino Melayo is his mentor.

Faith cometh by hearing. People work with what they perceive. In my time, we had people in the industry we looked up to because we could see they had a decent life. But today, the compensation mechanism makes it difficult to find people like that. That discourages young people from settling down.

So the problem is not talent; we have very smart programmers. The problem is whether they’re ready to settle down to follow set principles.

MM: How was PFS initially funded?

We achieved this by reinvesting the proceeds of projects we worked on back into the business. That’s how this business has grown organically so far. We don’t have outside investors. The company belongs to its employees.

MM: For a young man who left behind a promising career, there must have been societal pressure to keep up appearances. How were you able to stay level-headed?

YO: I think I was lucky to have a partner — my deputy managing director — who is a chartered accountant. He always managed our finances. His philosophy from day one of the business was “you cannot take from the bucket beyond what you have put into it”.

Both of us have always been on salaries. It doesn’t matter how much we make, the company’s money and our money stay separate. If you blow your money the way you like, tough luck but the business must be preserved.

I always tell young people, if you kill the goose that lays the golden eggs, you will not have more golden eggs. So rather than trying to build stuff for yourself, consider the company first. If and when the company becomes good, it will be able to pay you back.

MM: What advice would you give up and coming IT entrepreneurs?

YO: If you want to be successful in business, you must avoid the temptation of wanting to become a celebrity. It doesn’t make sense. Focus on your professional calling and be excellent at it.

There’s no such thing as an overnight success. I really do hope the religious houses would tone down on this. When you tell someone to “receive your miracle” what does that mean? People need to understand that everything that God created in life has principles that even He respects.

Take the Bible story of the blind man by the pool at Bethesda. Indeed, he was healed instantly. But he’d been going to that pool for 30-something years. He’d been making concerted and conscious efforts to be healed. But he had no assurances that he would be healed.

The same applies to business — the principle of the Chinese bamboo. There is no shortcut to success. God is not going to do anything that will violate his principles. Young entrepreneurs need to understand that if you want to build an institution, you have to learn to start small.

If you try to start big, the chances of small mistakes causing big calamities are very high. Learn to build capacity because if you don’t, you’re likely to blow the small opportunities that come your way. You need to pass through a season of grooming. David had never met a Goliath in his life. But because he had fought a bear and a lion he was confident that he could take on a Goliath. That’s the process I’m talking about.

Stop focusing on money. Focus on creating value and serving humanity. Don’t get me wrong, money is important. But the more you focus on money, the less you focus on value. The other day, I was teaching my daughters about capital. The focus in economics tends to be only on financial capital. But today, particularly in technology business, it’s a triangle. There is also emotional capital which is your passion. Most importantly, there is intellectual capital. How much do you think Uber and Airbnb needed to start?

Of course, there is no guarantee that anything you do will be successful. But there’s one factor that links all successful people together — persistence. The fact that you try something and you fail doesn’t make you a failure. Sometimes the idea just came before its time. Everyone thought Noah was crazy but his actions, the passion that he had, is what has preserved humanity till today.

You need to keep creating, keep innovating and keep moving up. One thing is certain, it’s only a matter of time before you strike “the one”. Usually when that happens, you no longer need to pursue further opportunities.