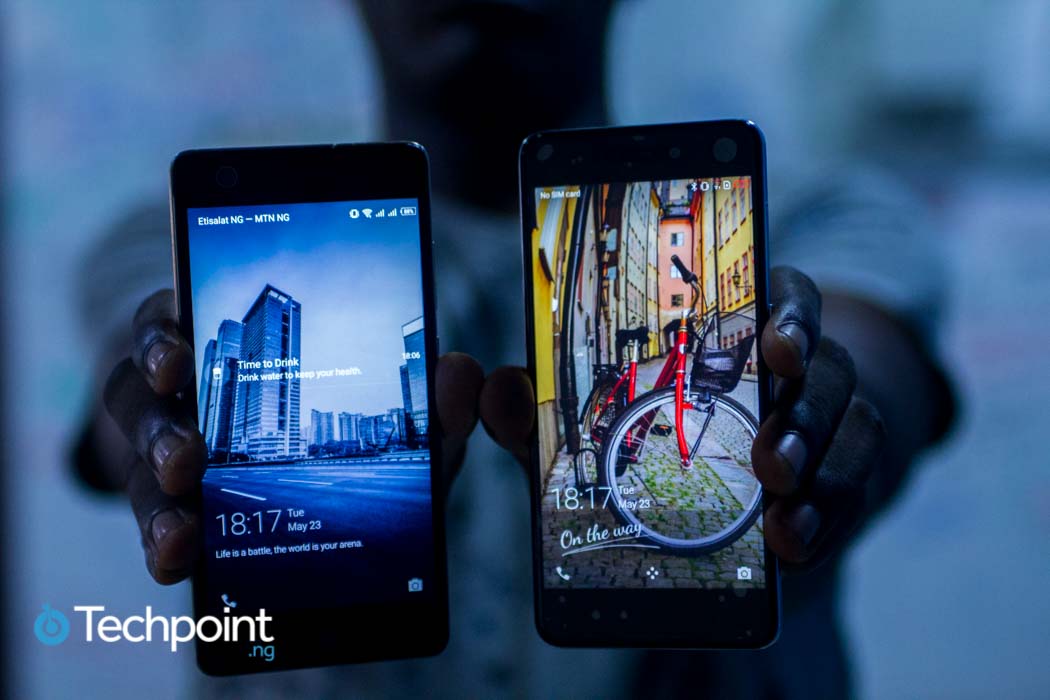 The Hot S appraises itself to be a smartphone with a powerful and efficient battery while the S2 pro brings a newer perspective of selfie taking to the delight of its users — the “Wefie”.

I will be pitting these two siblings against each in one court, testing their performance, peculiarity in design and extra features.

I hope that by the end of the article, you will be able to make a definite choice as to which of these smartphones fits your consumer cravings and desires.

Both devices are elegant in design, to say the least. Gone are the days my mum would refer to her phone as “pe mi pada owo ro mi”, which roughly translates to “call me back, my hand aches” in English. This was because of the big weight of phones at that time. Holding them up for too long could probably send you out for a massage.

The Infinix S2 pro, on the other hand, appears more lightweight with its arc glass being fused into the metallic casing

We took the two devices on a measuring scale and got interesting results. The Infinix S2 pro weighs about 165 g while the Infinix Hot S weighs a surprising 145g.

This came as quite a surprise because I always thought the S2 pro was the lighter one; perhaps the design is just too sleek for me to notice the extra weight.

However, you’d be happy to know that both phones will not create a bulge in your pocket.

Winner: The Infinix Hot S takes the lead in this round. Everyone loves a lightweight phone.

The amount of space available is a huge factor to be considered when purchasing your new device. Depending on the type of consumer you are, you may not mind 16GB without expandable memory while others may need 32GB with expandable memory.

Winner: The Infinix S2 Pro knocks the Hot S out of the ring on this one.

Phones were developed to foster efficient communication between two or more individuals that are not in the same geographical location. Standing on these, we did an evaluation of the available slots for the two devices.

Sim tray of the Infinix S2

This means you can make use of  either two micro SIMs, one micro and a standard uncut SIM or one micro SIM and a memory card at the same time.

The Infinix Hot S, on the other hand, comes with one micro SIM space and a micro hybrid slot

So, on the Infinix Hot S you are left with space for either two micro SIMs at the same time or one micro SIM card and one memory card.

Winner: Based on similarities in the varieties of SIMs the devices can take in at once, it’s tempting to call this a tie. However, I believe this goes to the Infinix S2 pro, considering its ability to take a wider range of SIMs at the same time.

Below are a few camera samples

Winner: Both phones produce similar picture quality, but we still need a winner. I’ll give it to the S2 Pro simply because of the newly added unique feature of the wefie camera, with abilities of capturing wide angled pictures while using the front camera.

Both phones come with non-removable li-ion batteries. Both have a capacity of 3000 mAh.

Winner: The Infinix Hot S easily takes this round.

It’ll not be appropriate to stand on just the specifications of the phones you’ll buy as a consumer, the money in the bag is also an important factor to consider.

Winner: Affordability is an important factor to consider in the purchasing mobile phones. I’ll have to give it to the Infinix Hot S

The Infinix S2 Pro is an elegant smartphone with comfortable features such as the dual front camera that effortlessly takes photos with wider angles.

The Infinix Hot is a chic and peculiarly designed smartphone, with efficient battery life, a strong 13 MP rear camera and awesome display.

Looking at these, it is obvious both devices were definitely manufactured to stand for the needs of the user. Putting them at loggerheads is not necessarily intended to crown the ‘better’ device, but simply to help you to be confident in whichever you settle for.