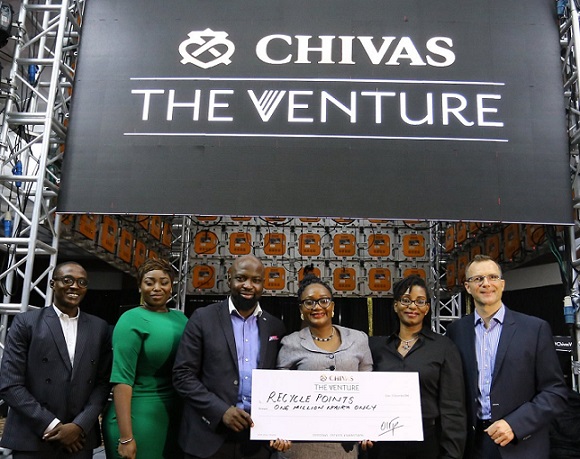 Earlier in the year, Chivas Regal announced its 2016 edition of “The Venture” — a $1 million annual fund and global search to reward those who are creating a positive change through their businesses.

Chiva Regal went ahead to host different regional competitions with each finalist to compete for a sizable chunk of the $1 million fund at the global competition billed to hold in June next year.

It’s Lagos edition, in a usual way, received a large number of applications, 226 out which were selected. The grand finale which was held on Friday at the Intercontinental Hotel saw three startups and finalist — Mobicure, EcoFuture and RecyclePoints — keenly contest for a prize money of ₦1 million and a chance to represent Nigeria at the global finals.

After a fierce contest between the startups, Chioma Ukonu’s RecyclePoints emerged the winner and will represent Nigeria at the global finals alongside 32 other social entrepreneurs across 6 continents in Los Angeles, California next year.

RecyclePoints is a waste recycling and social benefit venture that operates an incentive-based scheme which collects recyclable materials from consumers and in turn rewards them with ‘points.’ These points, when accumulated, could be used to redeem/shop for household items offered through its iRecycle store.

RecyclePoints has been on an upward trajectory since its launch. Just recently, the startup was amongst the three finalists at the Aso Villa Demo Day finale.