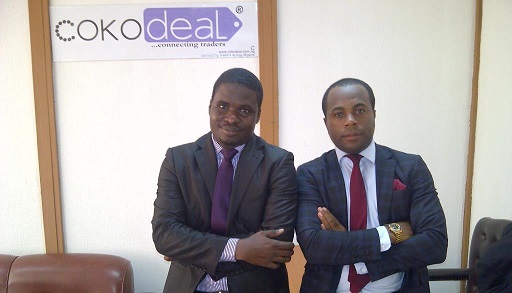 Asides being the second largest continent in the world, Africa contains about 30% of the world’s known minerals according to African Natural Resource Center (ANRC). However, despite having abundant resources, little can be said of its contribution towards local export. Underlying, again, the importance of technology in harnessing local production to full scale; from exploration of these resources to marketing their finished product.

We spent the weekend chatting with Mike Dola, founder and CEO of Cokodeal.com, and his co-founders, Michael Olufemi Aguda and Simon Nofa. Here’s how their platform is not only looking to bring in technology but, by so doing, exposing our “locally manufactured goods in Nigeria” to the rest of Africa and the world.

Cokodeal is a quality premium marketplace where buyers and sellers primarily trade products produced in Nigeria. With a focus on niche markets like agriculture (food), textile (clothing) and hide and skin (leather and bags), the goal is to boost intra-state trade, intra-African trade and ultimately connect trade corridors on the African continent to the rest of the world using technology.

But what’s with the brand name?

When a startup starts building its brand name around words that hold deep meaning to many, it would be seriously unforgiving if their arising product/platform fails to live up to expectation. The word “Coko” appears to be modeled from the word “Koko”.

“We wanted a name that many could easily relate with,” Mike confirmed my initial suspicions. The contextual meaning of the word “Koko” as used by Nigerians is a classic reminder of the hit song by the Koko master himself; which had everyone all of a sudden feeling very energetic. For clarification sake, “Koko” as we know it means “the real deal/business” or anything like it.

So is Cokodeal the real deal?

With the informal market (especially for the niche Cokodeal is catering for) being fraught with extensive market inaccessibility, limited data, obnoxious charges, obsolete or unguarded regulatory laws etc, Cokodeal’s effort couldn’t have been more meaningful as the platform put a lid to these obstacles. Through partnership with associations like Manufacturer’s Association of Nigeria (MAN), Nigerian Association of Small Scale Industries et al, they’ve penetrated deep regions where these products are sourced and brought it within reach of the buyer. In the process, merchants are able to eliminate cost of advertising while simultaneously leveraging technology to get a much wider reach/audience which ultimately increases sales. More so, the marketplace somewhat appears to be the only major eCommerce platform that is void of any product imported into the country. It is solely focused on goods locally manufactured in Nigeria. Just like the #BuyNaijaToGrowTheNaira campaign, the value chain is no doubt invaluable; particularly in the area of fostering manpower development, improving exportation and the GDP in broader perspective.

The “Deal” part of the brand

A normal marketplace should comprise many sellers and buyers. Anything outside that is tantamount to what economists describe as an imperfect marketplace. The deal here is being factored in when a customer has the luxury of many merchants, selling identical products, to choose from; as the case should be. “We have a compare item feature on goods searched for,” says Mike. With this system customers can compare goods across different sellers and go with the one they feel offers the best “deal”. And if for any reason a product listed is only available from a handful of merchants, it is safe to assume that such product is very scarce.

Well, it doesn’t end there, here’s what I particularly find interesting.

Internationalization of the platform

The platform is built such that it picks the geolocation of the visitor, be it merchant or buyer, and list the prices of the product in the denominating currency of that particular location. For instance, imagine Ghanaians searching and finding a Nigerian product listed in their own currency.

Product on the platform listed in Ghanaian currency

Furthermore the homepage of each country has its own distinctive design. Instead of developing like dot ke, or dot gh version, everything is intra-connected on the multi-platform to make it one single marketplace. Trading, no doubt, can only be interesting with this kind of framework.

It would be wrong to pin this model as a classic demonstration of trial and error. They were just as impressive from the onset; building the platform from scratch (in the UK at the time) with the ultimate goal of remaining true to their core objective. I should however state that, it came as no easy feat. For starters, a whooping sum of $100,000 has gone into building and developing the platform; all of which was bootstrapped. According to Dola, they haven’t raised any funds whatsoever.

Since launch in November 2014, Cokodeal may have had their challenges, I can only imagine. However, making it to this year’s SpeedUP Africa bootcamp alongside 35 other Nigerian startups would come arguably as the greatest vindication of the model to date.

So is Cokodeal the Koko? You be the judge.