Here is the pocket friendly, but powerful, Lumia 550 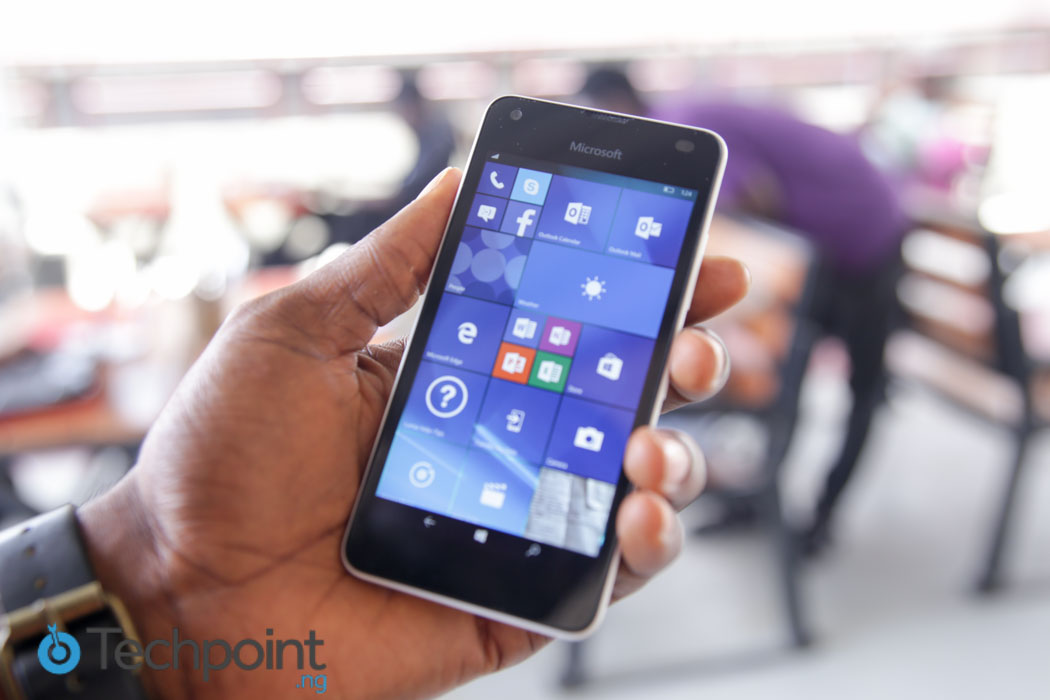 The Lumia 550 is the mid-range of the flagship devices, so in other words, it is a cheaper device that can do nearly everything the rest Windows 10 Mobile OS devices does, except working with the Continuum Display Dock. Here is an indepth look at its strengths and weaknesses.

The casing of the Lumia 550 is plastic and the white colour makes this particular one smudge free. Weighing a measly 142 grams, the Microsoft Lumia 550 manages to come off not paper-weight light without being too heavy

The only buttons available on the Microsoft Lumia 550 are on the right side of the device. They are the volume buttons and the and the power button beneath it.The two are somewhat too close to each other and you might end up pushing the power button when the lower volume is been depressed.

On the top of the device is the 5MP shooter with the flash beside it and the Microsoft logo in the middle of the device.

The tiny hole to the bottom left corner of the Lumia 550 is the small space reserved for the speaker grill. And the sound it produces is surprisingly crystal clear and well filtered.

The audio jack is at the top right-hand corner

On the top left-hand corner of the Lumia 550 is the 2MP selfie camera. The net mesh at the slit in the top corner is the call speaker grill and the light sensors are at the extreme right-hand corner.

At the bottom of the Lumia 550 is the slit for the call microphone. And underneath is the USB port for charging and data transfer.

Opening the back cover of the Lumia 550 is a somewhat tricky task as there is not slit or opening for prying it open. But if you are patient enough to work your way around it, after removing the battery, there is the Nano sim port at the lower end and directly above is the memory card slot.

The LCD screen of the Lumia 550 is 720 x 1280 pixels and this is refelcted in the liquid clear display of images and texts on the screen.

The screen did not fare very well under direct sunlight as it rendered so many characters illegible. Even after cranking the display brightness level to the highest, I was still seeing my reflection on the screen instead of the icons.

There’s a half screen feature on the Lumia 550 that is supposed to be a sort of one-hand operation mode. But for so many reasons, it feels useless.

Firstly, the device is small, and can basically be accomodated in the smallest of hands. Secondly, the other half of the screen just lies there uselessly and the screen does not fully optimize on the other working end.

To multitask and check on already opened apps, press and hold down the back arrow to view running apps and select.

When games and movies are loaded on to the screen, they explode onto crystal awesomeness. The size aside, I can game forever on this device.

One of the best features of the Lumia 550 and indeed the other recently launched Lumia devices is the new additions to the camera.

Rich Capture is a new feature of Lumia cameras that allows the Lumia 550 capture many pictures in a second and combine them into one snap. Somewhat like a moving picture or a GIF. After exposure, the pictures can be dissected individually and the best shot selected. Amazing.

The picture above was taken in low lighting by 10 p.m with the Rich Capture on.

With a combined fire power browsing, gaming and constant telephone calls, the battery of the Lumia 500 was averaging between 5 hours 30 minutes and 6 hours to go from 100% to zero. That is quite impressive for a 2,100 mAh battery.

At ₦31,850 the Lumia 550 is the most pocket friendly combination of productivity, compatibility and sleek you can find in the Lumia family right now, The device offers good value for money.

When put under intense pressure, the battery heats up in the back around a center point. However, the single SIM is a deal breaker for me, everybody has 2 0r 3 or even 4 SIMs these days( FYI, I have 4).

The Lumia 550 is not flawless, productivity is the primary aim of this particular range of Lumia devices. And the Lumia 550 truely lives up to its expectation with multiple Microsoft productivity tools and extensive battery life for so small a device. It is a productivity machine indeed.